When it comes to lithium batteries, you basically have two types. LiPoly batteries usually come in pouches wrapped in heat shrink, whereas lithium ion cells are best represented by the ubiquitous cylindrical 18650 cells. Are there exceptions? Yes. Is that nomenclature technically correct? No, LiPoly cells are technically, ‘lithium ion polymer cells’, but we’ll just ignore the ‘ion’ in that name for now.

Lithium ion cells are found in millions of ground-based modes of transportation, and LiPoly cells are the standard for drones and RC aircraft. [Tom Stanton] wondered why that was, so he decided to test the energy density per mass of these battery chemistries, and what he found was very interesting.

Using his neat plane with 3D printed wing ribs as the testbed, [Tom] plugged in the batteries and flew around a field for the better part of an afternoon. The LiPo flew for 41.5 minutes, whereas the much more energy dense lithium ion battery flew for 36.5 minutes. What’s going on here?

While the lithium ion battery has a much higher capacity, the problem here is the internal resistance of each battery chemistry. The end voltage for the LiPo was a bit lower than the lithium ion battery, suggesting the 18650 cells can be run down a bit further than [Tom]’s test protocol allowed. After recharging each of these batteries and doing a bit of math, [Tom] found the lithium ion batteries can fly for about twice as long as their LiPo counterparts. That means an incredibly long test of flying a plane in a circle over a field; not fun, but we are looking forward to other people replicating this experiment.

END_OF_DOCUMENT_TOKEN_TO_BE_REPLACED 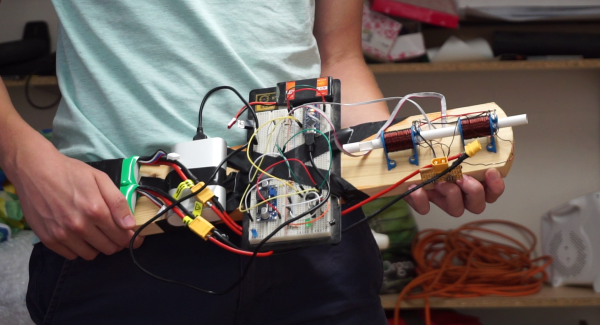 Whenever we see a coil gun project on the Internet, it seems to involve a bank of huge capacitors. [miroslavus] took a different approach with his gun–he wanted his project to be built without those monster caps.

It’s powered by quadcopter LiPo batteries, 2x 1400 MaH drone batteries wired up in series and triggering 21SWG copper coils that [miroslavus] created with the help of a custom 3D-printed winding rig he designed. The rigs have ridges to help you lay the coils down neatly, and they also have mounts for photodiodes, ensuring the gun knows when it’s loaded.

When triggered, the Arduino Nano activates a pair of IRF3205 MOSFETS with logic signals stepped up to 20V, shooting lengths of 7mm or 8mm steel rod. The gun isn’t exactly creating plasma discharges with its launches, but it’s a fascinating project nonetheless.

Check out the disposable camera coil gun project and the coil guns for newbies posts we previously ran.

END_OF_DOCUMENT_TOKEN_TO_BE_REPLACED 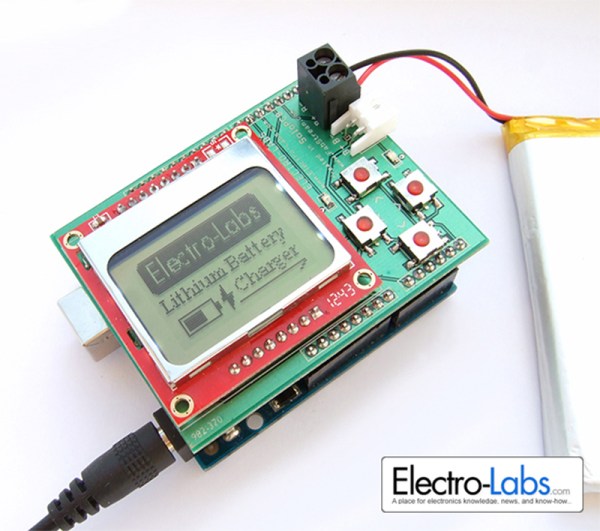 Surely you need yet another way to charge your lithium batteries—perhaps you can sate your desperation with this programmable multi (or single) cell lithium charger shield for the Arduino?! Okay, so you’re not hurting for another method of juicing up your batteries. If you’re a regular around these parts of the interwebs, you’ll recall the lithium charging guide and that rather incredible, near-encyclopedic rundown of both batteries and chargers, which likely kept your charging needs under control.

That said, this shield by Electro-Labs might be the perfect transition for the die-hard-‘duino fanatic looking to migrate to tougher projects. The build features an LCD and four-button interface to fiddle with settings, and is based around an LT1510 constant current/constant voltage charger IC. You can find the schematic, bill of materials, code, and PCB design on the Electro-Labs webpage, as well as a brief rundown explaining how the circuit works. Still want to add on the design? Throw in one of these Li-ion holders for quick battery swapping action. 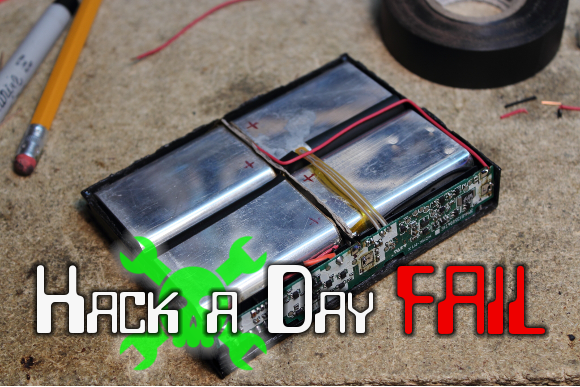 Just about anyone can build this UV index sensing wearable that detects heat rays from the sun and reminds the user to put on sunscreen. There is no soldering required, which makes this a nice beginners projects for those unfamiliar with hooking up electronic sensors.

All that is needed is a FLORA main board, one UV index sensor, a piezo Buzzer, a 500mAh lipoly battery, 2-ply conductive thread, a couple of household tools, and your favorite summer’s hat.

Once the materials have been rounded up, the rest of the process is relatively simple. Threading the FLORA in and place and connecting the Piezo only takes a few minutes. Then the UV sensor is added allowing the hat to start collecting data. A little bit of coding later, and the whole system is ready to be worn out in the sun. What’s great about this project is that the hat can be programmed to play a song when it is time to apply more sunscreen. Everyone from beach bums, to sun-bathing beauties, to music festival attendees will be able to find this hat useful. And, it is cheap and easy to make.

The video on the Adafruit tutorial page shows how simple it is to rig up the system.

END_OF_DOCUMENT_TOKEN_TO_BE_REPLACED We first wrote about the MintyBoost back in 2006. Today, Adafruit has created a tutorial for making a solar powered MintyBoost. Using a MintyBoost, a solar panel, LiPo battery and a charger, they built on their Solar LiPoly tutorial. They fed the power tap output of the LiPoly charger into the battery input of the MintyBoost to perform the voltage step-up for USB devices. Based on an instructable that used SparkFun parts, this tutorial shows how to use parts that are available from one source. We hear that there will be some evolution of the MintyBoost coming down the line that will including charging capabilities.