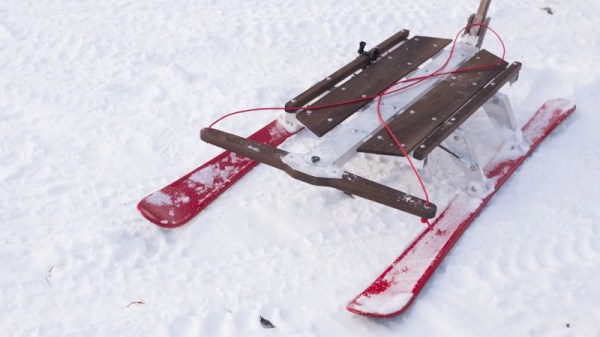 Sledding is a pastime often left to younger humans, though there is no good reason why this must be the case. [JoshXarles] is an adult with a strong enthusiasm for carving up the snow, and set out to build a high-performance sled this winter.

It’s a ski-based design, and [Josh]’s goal from the outset was to build a rig with serious handling credentials. His favored run features several 180 degree switchbacks, so it’s important to be able to corner well without losing speed. This was achieved by using sidecut skis with a carefully designed steering system, allowing the sled to carve corners in the same way as a downhill skier. The frame of the sled is built out of aluminium box tubing, bolted together to form a strong structure. There’s also attractive wooden decking which completes the look.

The sled performed admirably in initial testing, with good steering feel and plenty of speed downhill. We’d love to try ourselves, weather permitting, of course. There are also electric options for those not blessed with geologically-suitable features to sled down. Video after the break.

END_OF_DOCUMENT_TOKEN_TO_BE_REPLACED

What do you do during the winter months in Ohio? Sledding of course! Sledding normally takes place on hills, but [Peter Sripol] is no slave to the terrain. He’s built an air sled to conquer the barren wastelands of unplowed parking lots. Air sleds aren’t as outlandish as you might think — the Soviet Union had decades of success with them.

The project starts with toboggan style plastic sled. [Peter] built a frame into the plastic using an aluminum square. The frame is used to support a motor pod at the back of the sled. The motor, of course, comes from his DIY electric plane project. Don’t worry — [Peter] didn’t cannibalize his plane. The plane’s motors are being upgraded, and this is one of the originals.

The motor itself is quite a beast. It’s a 150cc equivalent brushless outrunner motor from HobbyKing. It’s not cheap either at around $450 USD.  The motor is controlled by an equally beefy brushless controller wired into a standard R/C car receiver. A pistol grip transmitter makes a great wireless throttle for the system.

Steering is a much more mechanical affair. The sled’s rudder is controlled much like that of an airplane. A steel cable pull-pull system is connected to a stick mounted in front of the pilot. The unreinforced styrofoam rudder turned out to be a weak point in the build — check out the video after the break to see the full story.

END_OF_DOCUMENT_TOKEN_TO_BE_REPLACED

Next time you’re taking a vacation anywhere that resembles the planet Hoth, you might want to take the time to build a snow speeder sled before you go. As you can see in the video above (at around the 1:00 mark), the sled looks great, even as it “flies” down the slopes. We were fairly surprised to find it was made entirely out of cardboard. We were also fairly surprised at how large the person was that unfolded from the cockpit when it stopped!

You can see pictures of the build process over at Dvice. Unlike other toy-based sleds, the use of a track system helps to maintain proper orientation of the camera. Obviously this isn’t going to achieve the perfectly smooth and precise motion you’d get out of a sled system like this rail and linear bearing version. But honestly, most of us don’t have cameras of the quality to warrant that type of high-end system. END_OF_DOCUMENT_TOKEN_TO_BE_REPLACED