[Connor Krukosky] wanted to buy another computer. Even though he is only 18, he had his first computer at 18 months old. He’s had plenty since then and his interest in computers led him to pursue a career in electrical engineering. A few years ago, [Conner] started collecting vintage computers.

He’d bought up some Apple computers, terminals, and even a Data General minicomputer. Then he found a notice that Rutgers was auctioning off an IBM z890 mainframe computer. People warned [Conner] that this wasn’t a desktop workstation, it was a 2,200 pound case that probably wouldn’t fit through standard doors.

He was undeterred. He won the auction for under $240. The real expense, of course, would be moving it. He planned to make two trips: One to strip the machine to parts and bring some parts back and then a second trip to get the remaining parts.

You can see in the video below that he had a lot of adventure moving the beast. Things didn’t fit and even some excavation had to happen to get the computer in his basement.

END_OF_DOCUMENT_TOKEN_TO_BE_REPLACED 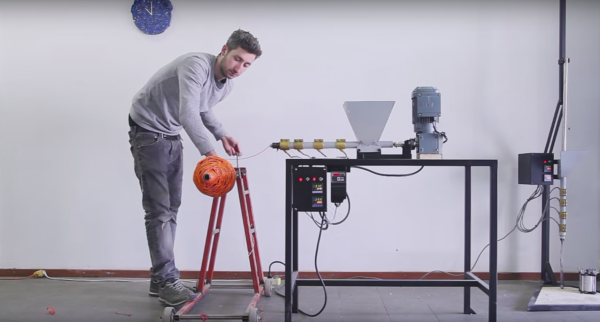 Walk on almost any beach or look on the side of most roads and you’ll see the bottles, bags, and cast-off scraps of a polymeric alphabet soup – HDPE, PET, ABS, PP, PS. Municipal recycling programs might help, but what would really solve the problem would be decentralized recycling, and these open-source plastics recycling machines might just jump-start that effort.

We looked at [Precious Plastic] two years back, and their open-source plans for small-scale plastic recycling machines have come a long way since then. They currently include a shredder, a compression molder, an injection molder, and a filament extruder. The plans specify some parts that need to be custom fabricated, like the shredder’s laser-cut stainless steel teeth, but most can be harvested from a scrapyard. As you can see from the videos after the break, metal and electrical fabrication skills are assumed, but the builds are well within the reach of most hackers. Plans for more machines are in the works, and there’s plenty of room to expand and improve upon the designs.

We think [Precious Plastic] is onto something here. Maybe a lot of small recyclers is a better approach than huge municipal efforts, which don’t seem to be doing much to help.  Decentralized recycling can create markets that large-scale manufacturing can’t be bothered to tap, especially in the developing world. After all, we’ve already seen a plastic recycling factory built from recycled parts making cool stuff in Brazil.

END_OF_DOCUMENT_TOKEN_TO_BE_REPLACED

An exciting aspect of the trend in single board computers towards ever faster processors has been the clever use of their digital I/O with DSP software to synthesize complex signals in the analogue and RF domains that would previously have required specialist hardware. When we use a Raspberry Pi to poll a sensor or flash an LED it’s easy to forget just how much raw processing power we have at our fingertips.

One of the more recent seemingly impossible feats of signal synthesis on a Raspberry Pi comes from [Evariste Courjaud, F5OEO]. He’s created a DVB-S digital TV transmitter that produces a usable output direct from a GPIO pin, with none of the external modulators that were a feature of previous efforts required. (It is worth pointing out though that for legal transmission a filter would be necessary.)

DVB is a collection of digital TV standards used in most of the world except China and the Americas. DVB-S is the satellite version of DVB, and differs from its terrestrial counterpart in the modulation scheme it employs. [Evariste] is using it because it has found favor as a digital mode in amateur radio.

This isn’t the first piece of [F5OEO] software creating useful radio modes from a GPIO pin. He’s also generated SSB, AM, and SSTV from his Pi, something which a lot of us in the amateur radio community have found very useful indeed.

We’ve covered digital TV creation quite a few times in the past on these pages, from the first achievement using a PC VGA card almost a decade ago to more recent Raspberry Pi transmitters using a USB dongle and a home-built modulator on the GPIO pins. Clever signal trickery from digital I/O doesn’t stop there though, we recently featured an astoundingly clever wired Ethernet hack on an ESP8266, and we’ve seen several VHF NTSC transmitters on platforms ranging from the ESP to even an ATtiny85.

Thanks [SopaXorzTaker] for the nudge to finally feature this one.

END_OF_DOCUMENT_TOKEN_TO_BE_REPLACED 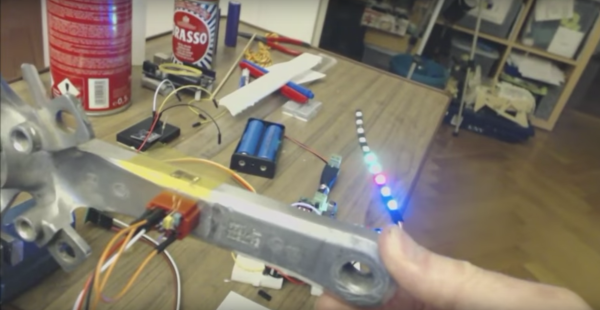 In any motorsport, the more you know about how the engine is performing, the better a driver is likely to do in a race. That holds for bicycles, too, where the driver just happens to also be the engine. There are plenty of cheap bike computers on the market, but the high-end meters that measure power output are a bit pricey. [chiprobot] is looking to change that with a home-brew, low-cost bike power meter.

The project still appears to be in the proof-of-concept phase, but it’s an interesting concept for sure. The stock crank arms are carefully fitted with two pairs of tiny strain gauges. The gauges are wired in a Wheatstone bridge arrangement, with one gauge in each pair mounted perpendicular to the force on the crank to serve as a static reference. Output from the bridge is fed to an HX711 instrumentation amplifier. The demo video below shows how sensitive the bridge and 24-bit amp are.

The goal is to send crank data to a handlebar-mounted UI via WiFi with a pair of ESP8266 modules. We like the idea of a bicycle area network, but [chiprobot] has his work cut out for him in terms of ruggedizing and weatherproofing all this gear. We’ll be sure to keep an eye on this project. In the meantime, there’s plenty to learn from this bike power meter project we covered last year.

END_OF_DOCUMENT_TOKEN_TO_BE_REPLACED

Wherever you stand on the topics of road safety and vehicle speed limits it’s probably fair to say that speed cameras are not a universally popular sight on our roads. If you want a heated argument in the pub, throw that one into the mix.

But what if you live in a suburban street used as a so-called “rat run” through route, with drivers regularly flouting the speed limit by a significant margin. Suddenly the issue becomes one of personal safety, and all those arguments from the pub mean very little.

[Gregtinkers]’ brother-in-law posted a message on Facebook outlining just that problem, and sadly the local police department lacked the resources to enforce the limit. This set [Gregtinkers] on a path to document the scale of the problem and lend justification to police action, which led him to use OpenCV and the Raspberry Pi camera to make his own speed camera.

The theory of operation is straightforward, the software tracks moving objects along the road in the camera’s field of view, times their traversal, and calculates the resulting speed. The area of the image containing the road is defined by a bounding box, to stop spurious readings from birds or neighbours straying into view.

He provides installation and dependency instructions and a run-down of the software’s operation in his blog post, and the software itself is available on his GitHub account.

We’ve had a lot of OpenCV-based projects but haven’t featured a speed camera before here on Hackaday. But we have had a couple of dubious countermeasures, like that humorous attempt at an SQL injection attack, or a flash-based countermeasure.