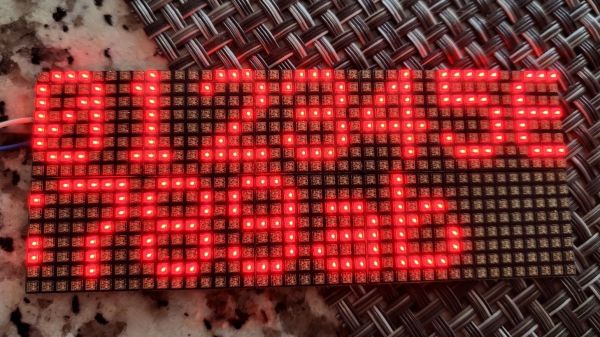 There’s a lot to admire about LED matrix projects, which more often than not end up looking really cool. But most of them rely on RGB matrix panels sourced from the surplus market, and while there’s nothing wrong with that, building your own tiny, tileable LED matrix panels makes these builds just a little bit cooler.

There’s a lot to admire about these matrix panels, not least of which is the seamless way they tile together. But to get to that point, [sjm4306] had a lot of prep work to do. He started with a much simpler 5×7 array, using the popular WS2812 RGB LEDs on a custom PCB. With a little practice under his belt, it was time to move to the much smaller SK6805 LEDs, which were laid out in an 8×8 matrix. The board layout is about as compact as it can be; [sjm4306] reports that it pushed the PCB fab to their limits, but he ended up with LEDs spaced perfectly on the board and just enough margin to keep consistent spacing in two dimensions when the boards are adjacent to each other.

Assembly of the boards was challenging, to say the least. The video below shows that the design left barely enough room for handling the LEDs with tweezers, and some fancy finagling was needed to get the boards on and off the hotplate for reflow. [sjm4306] says that he’ll be exploring JLC PCB’s assembly service in the future, since each board took an hour for him to assemble. But they look fantastic when daisy-chained together, with no detectable gaps at the joints.

With matrices like these, the possibilities are endless. We’ve even got a whole list of LED matrix projects over on Hackaday.io for you to check out.

END_OF_DOCUMENT_TOKEN_TO_BE_REPLACED 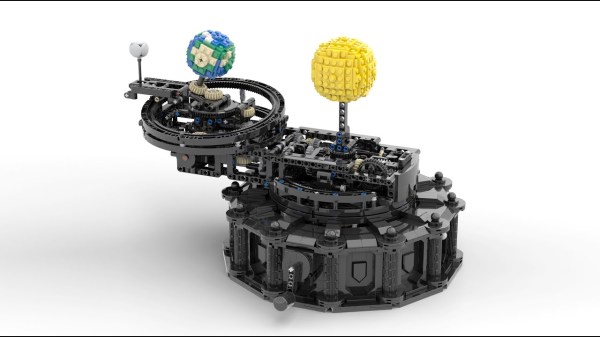 We’ve covered just a few orreries in the past, from this somewhat simple laser cut orrery to this horrifically complex and beautiful thing here.  END_OF_DOCUMENT_TOKEN_TO_BE_REPLACED 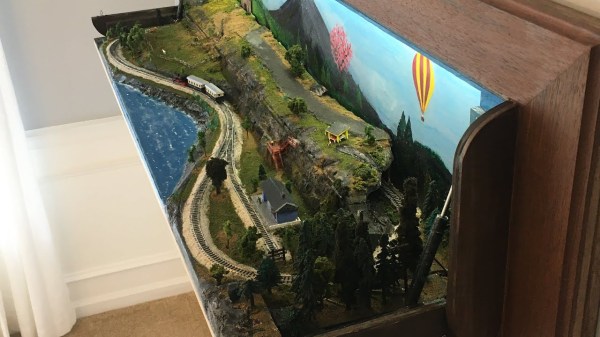 Most of us would be pretty happy with ourselves if we made one of those neat “epoxy river” types of art for our home. Not so with prolific maker [Peter Waldraff]. [Peter] is a skilled craftsman with a penchant for hiding model railroads in everyday furniture and fixtures. To this end, he’s created what he calls the Hidden Epoxy Railroad, which you can see in the video below the break.

The project starts with basic woodworking to build the frame, hinges, and the hinged epoxy river with its colored epoxy pour. Instead of stopping there, [Pete] continued by building a full N scale model railroad into the piece. The frame doubles as a backdrop complete with a beautifully painted scene with what we’re guessing is an N scale hot air balloon, too.

Of course, the skeptics among us might doubt whether the model railroad is fully hidden when closed. But one detail that Pete shared with us is that his wife never knew about the train portion of the build until their daughter pointed it out. She thought it was merely a piece of art for the dining room. Truly a great hack!

The entire build is documented on [Pete]’s YouTube channel, with its own 15 part build series. It’s definitely worth checking out. We’ve covered one of [Pete]’s hidden railroad builds before, so make sure you check that out, too!

END_OF_DOCUMENT_TOKEN_TO_BE_REPLACED 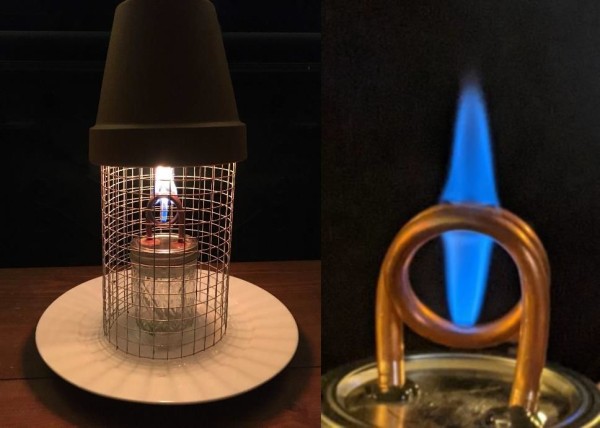 At Hackaday’s Minnesota office, we appreciate central heat and hot coffee because the outdoor temperature is sub-zero in Celsius and Fahrenheit. Not everyone here has such amenities, and families living in tents could use heater help. If you live somewhere inhospitably cold and have the resources (time being the most crucial), please consider building and donating alcohol jet burners.

Alcohol burners like these are great for tents because if they tip over, they self-extinguish. You can fill them with 70% rubbing alcohol and they’ll heat a small space, and if running on denatured alcohol, they can be used to cook with. They won’t do you much good outdoors unless you have significant wind protection, as the tiny jet is likely to blow out. The first time you light one, you must heat the coil with a lighter or another heater to vaporize incoming fuel, then it can sustain itself by wicking fluid up from the reservoir jar. Relighting after a tip or accidental gust only takes a spark since the copper is already hot.

If you came for a hack, note how they fill the small tubes with salt funneled through a condiment cap before bending them. Sure, there are springy pipe bending tools, but who doesn’t already have salt and tape? Keeping humans warm is crucial, but heating metal takes a different approach.

Heater Bloc's Guide for Building the Copper Coil Alcohol Heater and Safety Enclosure is now available!
Please share this zine with anyone interested in instructions on how to build a tent-safe alcohol heater. https://t.co/iv5xKd93jo

Thank you for the tip, [cyberlass]

Unbinare is a small Belgian company at the forefront of hacking e-waste into something useful, collaborating with recycling and refurbishing companies. Reverse-engineering is a novel way to approach recycling, but it’s arguably one of the most promising ways that we are not trying at scale yet. At Hackaday Remoticon 2021, Maurits Fennis talked about Unbinare’s efforts in the field and presented us with a toolkit he has recently released as a part of his work, as well as described how his background as an artist has given him insights used to formulate foundational principles of Unbinare. 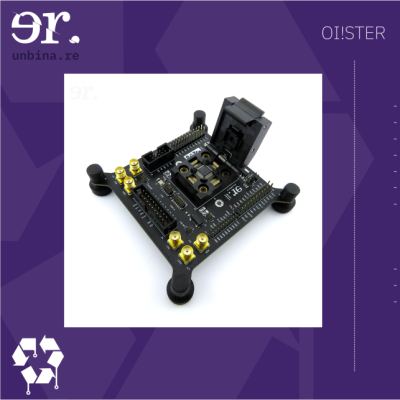 Unbinare’s tools are designed to work in harmony with each other, a requirement for any productive reverse-engineering effort. OI!STER is a general-purpose salvaged MCU research board, with sockets to adapt to different TQFP chip sizes. This board is Maurits’s experience in reverse-engineering condensed into a universal tool, including a myriad of connectors for different programming/debugging interfaces. We don’t know the board’s full scope, but the pictures show an STM32 chip inside the TQFP socket, abundant everywhere except your online retailer of choice. Apart from all the ways to break out the pins, OI!STER has sockets for power and clock glitching, letting you target these two omnipresent Achilles’ heels with a tool like ChipWhisperer.

END_OF_DOCUMENT_TOKEN_TO_BE_REPLACED 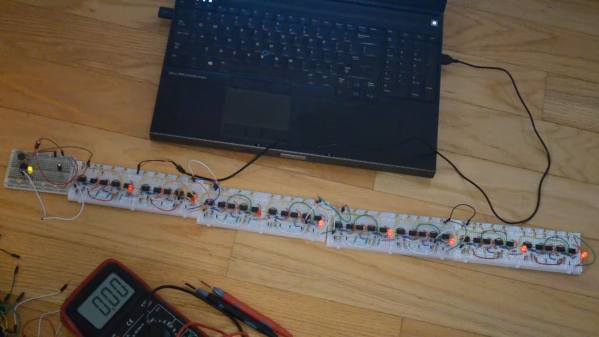 With a 555 on the BOM, you never know what you’re going to get. With 40 of the versatile timer chips in a build, you might just get something completely unexpected, like this 555-based eight-bit digital counter.

This one comes to us by way of [Astronomermike], who chose to make a digital circuit with nothing but 555s and a largish handful of passives as his entry in the current 555 Timer Contest. The ubiquitous timer chip is not exactly the first chip that comes to mind for digital applications, but it does contain an SR latch, which only requires a little persuasion to become a JK flip flop. His initial design for the flip flop that would form the core of the circuit had a pair of 555s surrounded with a bunch of OR gates and inverters — within the rules of the contest but hardly in its spirit. Luckily, the 555 makes a fine inverter too, and along with some diode-resistor OR gates, the basic counter module was born.

The video below shows the design and build, as well as the trip down the troubleshooting rabbit hole courtesy of a bad breadboard. Each half-nibble stage of the 8-bit counter occupies a full breadboard with ten 555s; the whole 40-chip string actually works and looks pretty cool doing it.

Truth be told, this is exactly the kind of thing we had in mind when dreaming up this year’s 555 contest, so good on [Astronomermike] for thinking outside the box for this one. To see what other uses people have found for the chip that keeps on giving, or to get your entry in before the deadline on January 10, head over to the contest page.