Sometimes it feels as though all the good physical interactions with machines have disappeared. Given our current germ warfare situation, that is probably a good thing. But if fewer than ten people ever will be touching something, it’s probably okay to have a little fun and make your own interfaces for things.

Fun definitely seems to be some of the inspiration behind [sethvoltz]’s retro-style launch console. This two-factor authorization token-based system is responsible for an important task that usually receives no fanfare — deploying code to production.

The console is centered around a Yubikey, which is type of hardware dongle for 2FA. Flipping the guarded toggle switch will initiate the launch sequence, and then it’s time to insert the Yubikey into the 3D-printed lock cylinder and wait for authorization. If the Raspberry Pi decides all systems are go, then the key can be turned ninety degrees and the mushroom button mashed. You have our permission to peek at the declassified demo after the break. Stick around for a CAD view inside the lock cylinder.

Console culture was great, but the old full-size cabinets sure took up a lot of space. If you’re more of a hardware person, check out this mini-console for testing multiple servos.

END_OF_DOCUMENT_TOKEN_TO_BE_REPLACED 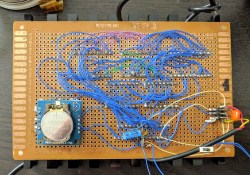 END_OF_DOCUMENT_TOKEN_TO_BE_REPLACED

When we think of an old-style computer terminal, it has a CRT screen: either one of the big 1970s VDUs with integrated keyboard, or maybe one from a later decade with more svelte styling. You would have found other displays in use in previous decades though, and one of them came our way that we think it worthy of sharing.

[Dan Julio] was given several tubes of Siemens DL1416B 4-digit 17-segment LED displays by a friend, and decided to use them as an unusual retro display for his terminal project. These devices are an alphanumeric display with a parallel interface that can show a subset of the ASCII character set as well as a cursor. He had 213 of them, so made plans for a 64 character by 16 line display, however on discovering a quantity of the parts were non-functional he had to scale back to 12 lines of 48 characters.

The displays are mounted on PCBs in groups of four, controlled by a PIC16F1459 and some shift registers. These boards are then daisy-chained via a TTL serial line. The whole display shares one of the three serial ports on a Teensy 3.1 with his retro keyboard that has its own PIC controller, the others serving a serial printer port and the terminal serial port. The Teensy software has two modes: serial terminal or a Tiny Basic interpreter, and the relevant repositories are linked from the project page.

Since each set of DL1416Bs takes 250 mA, the whole display consumes about 9 A at 5 volts. On top of that the keyboard uses another 500 mA, so a sufficiently powerful supply had to be incorporated. This is mounted along with the Teensy in a very well-made enclosure, and the whole is mounted on what looks like a surplus monitor stand for a very professional finish.

To take us through the terminal’s features he’s posted a YouTube video that we’ve placed below the break. It comes across as a surprisingly usable machine, as he logs into a Raspberry Pi and edits a file, and takes us through some features of the BASIC interpreter.

END_OF_DOCUMENT_TOKEN_TO_BE_REPLACED After having ported Contiki to his TI Launchpad platform, [Marcus] was eager to do something with it. He therefore built a simple clock with a vintage HPDL-1414 “smart four-character 16-segment alphanumeric display” and a msp430g2553.

The result that you can see above is powered over USB, includes a 3.3V LDO linear voltage regulator as well as a button, a LED, a crystal, and several passive components. Fortunately enough, the 5V-powered HPDL-1414 display accepts 3.3V logic at its inputs, avoiding the need for level translators.

The clock program is running on the ported Contiki 2.6 that you can find on his Github repository. [Marcus] is considering using a vibration motor to buzz every 20 minutes during work hours as a reminder for the 20-20-20 rule to battle eye fatigue: every 20 minutes, look at something 20 feet away for 20 seconds. A video of the system in action is embedded after the break.