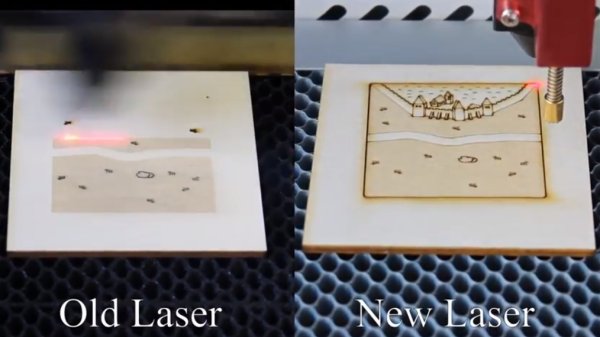 When it comes to power tools, generally speaking more watts is better. But as laser maestro [Martin Raynsford] shows, watts aren’t everything. He shares a brief video showing his older 100 W laser being handily outperformed by a newer 30 W machine. Shouldn’t the higher power laser be able to do the same job in less time? One might think so, but wattage isn’t everything. The 30 W laser engraves and cuts a wooden tile in just under half the time it takes the 100 W machine to do the same job, and with a nicer end result, to boot.

Why such a difference? Part of the answer to that question lies in that the newer machine has better motion control and can handle higher speeds, but the rest is due to the tubes themselves. The older 100 W machine uses a DC-excited (big glass water-cooled tube) CO2 laser, and the newer 30 W machine uses an RF-excited laser that looks a bit like a big metal heat sink instead of oversized lab glassware. Both tubes output what is essentially the same beam, but the RF tube is overall capable of a more refined, more stable, and more finely focused point than that of the glass tube. Since engraving uses only a small fraction of even the 30 W laser’s power, the finer control that the RF laser has over the low end of the power scale results in a much higher quality engraving.

Embedded below is a short video showing both machines engraving and cutting the same tile, side by side. You may wish to consider watching this one full screen, to better see the fine details.

END_OF_DOCUMENT_TOKEN_TO_BE_REPLACED

When a neighbor decided to cut down a walnut tree, [voluhar] decided to make something of the wood. The result was this custom keyboard that combines wood and metal in a lovely and functional package.

Walnut is a wood with a rich heritage in consumer electronics. Back in the early days of TV, huge console sets were built into solid walnut cabinets and proudly displayed along with the other fine furnishings in a home. [voluhar]’s keyboard captures a little of that spirit while retaining all the functionality you’d expect. From the custom PCB to the engraved aluminum key caps, it looks like every part was machined with a CNC router. The keyboard sports satisfyingly clicky Cherry MX switches, and a few cleverly positioned LEDs provide subtle feedback on the state of the locking keys. As for the imperfections in the walnut case, we think it just adds to the charm and warmth of the finished product, which would look great on any desktop.

Wood has appeared in a couple of custom keyboards that we’ve featured before, like this all-wood version. But if you want the retro look without the wood, you could always try a keyboard built out of a typewriter.

END_OF_DOCUMENT_TOKEN_TO_BE_REPLACED

Over the last few months, [Chris] has been machining a timepiece out of brass and documenting the entire process on his YouTube channel. This week, he completed the clock face. The clock he’s replicating comes from a time before CNC, and according to [Chris], the work of engraving roman numerals on a piece of brass would have been sent out to an engraver. Instead of doing things the traditional way, he’s etching brass with ferric chloride. It’s truly artisan work, and also provides a great tutorial for etching PCBs.

[Chris] is using a photoresist process for engraving his clock dial, and just like making PCBs, this task begins by thoroughly scrubbing and cleaning some brass with acetone. The photoresist is placed on the brass, a transparency sheet printed off, and the entire thing exposed to four blacklights. After that, the unexposed photoresist is dissolved with a sodium carbonate solution, and it’s time for etching.

The clock face was etched in ferric chloride far longer than any PCB would; [Chris] is filling these etchings with shellac wax for a nice contrast between the silvered brass and needs deep, well-defined voids.

You can check out the video below, but that would do [Chris]’ channel a disservice. When we first noticed his work, the comments were actually more positive than not. That’s high praise around here.

END_OF_DOCUMENT_TOKEN_TO_BE_REPLACED

Want a laser cutter, but don’t have the space for one? How about a portable machine to engrave and cut wood and plastics? A folding laser cutter solves these problems, and that’s exactly what Red Ant Lasers was showing off last weekend at Maker Faire.

Inside the team’s Origami laser cutter is a 40 Watt CO2 tube, shooting its beam along an entirely enclosed beam path. The beam travels through the body of the machine, out into the folding arm of the machine, and down to whatever material you’ve placed the Origami on. It’s a 40 Watt laser so it will cut plywood and plastics, and as shown in the video above, does a fine job at engraving plywood.

This is a Class 4 laser device operating without any safety glass, but from the short time I spent with the Red Ant team, this is a reasonably safe device. You will need safety glasses if you’re within five feet, but after that, everything (according to OSHA, I think) is safe and not dangerous. Either way, it’s a tool just like a table saw. You don’t see commentors on the Internet complaining about how a spinning metal blade is dangerous all the time, do you?

The Red Ant guys are currently running a Kickstarter for their project, with a complete unit going for $4200. It’s pricier than a lot of other lasers, but not being constrained by the size of a laser cutters enclosure does open up a few interesting possibilities. You could conceivably cut a 4×8 sheet of plywood with this thing, and exceptionally large engravings start looking easy when you have a portable laser cutter.

While most of the time the name of the game is to remove a lot of metal, etching is an entirely other process. If you just want to put a logo on a piece of steel, or etch some labels in a piece of aluminum, You need to think small. Mills and CNC routers will do, but they’re expensive and certainly not as easy to work with as a small, homebrew electrochemical etcher.

This etchinator is the brainchild of [Gelandangan], and gives the techniques of expensive commercial etchers to anyone who can put together a simple circuit. This etcher can etch with both AC and DC thanks to a H bridge circuit, and can be fabbed up by anyone who can make their own circuit board.

To actually etch a design in a piece of metal, simply place the piece on a metal plate, put the stencil down, and hold a felt-covered electrode moistened with electrolyte down over the stencil. Press a button, and in about 30 seconds, you have a wonderfully etched piece of metal.

[Gelandagan] has some templates that will allow you to make your own electro etcher, provided you can etch your own boards and can program the PIC16F1828 microcontroller. All this info is over on the Australian blade forum post he put up, along with a demo video below.

END_OF_DOCUMENT_TOKEN_TO_BE_REPLACED The problem with laser etching dark materials is that the areas burnt away by the intense light don’t really stand out from the rest of the surface. [The 5th Fool] is taking a roundabout way of correcting this by topping his laser engravings with contrasting paint. The technique is still pretty simple and we think it looks great!

Basically he’s etching a layer of painter’s tape which becomes a stencil. But the surface it is masking also gets etched so the paint has an area below to the surface which it can fill in. We figure this will help with durability issues.

After etching the painters tape the design gets a few coatings of a high-contrast paint color and is left to dry. To remove the stencil, duct tape is applied to the entire area. This helps quite a bit in removing the tiny bits of tape from an intricate design.

[Scott] wanted to do some v-carving with a CNC router, but couldn’t find software to generate GCode that didn’t cost hundreds of dollars. He ended up doing the sensible thing and wrote his own that will generate tool paths from CXF fonts. We’ll be bookmarking this for when our router project is done.

Dissatisfied with the sound output on his Sega Genesis, [Drakon] installed a few mods into his console. How much could it really affect the sound? Listen to the video. The changeover happens at 0:50. Impressive. Now if only the chiptune scene would get into Segas.

Yes, we did, and now we’re seeding

Here’s an alternative to Thingiverse: The Pirate Bay has a new category for 3D-printable objects. The best file so far? A 1970 Chevelle. US Copyright law does not protect (most) physical objects, so it’s not illegal. Honestly, we can’t wait for somebody to take this to the courts; It’s sure to be an interesting case. Somebody upload a ship hull design and give the EFF a buzz.

Just be glad it’s not a QFN

[Mikey] was pulling a PDIP ATMega8 out of a socket with pliers and a screwdriver and broke the RESET pin. Ouch. He fixed it by soldering on a lead from a resistor. We’ve all done this before, but [Mikey]’s results look really good. Here’s the gallery.

If you want a second analog stick for your 3DS, you could wait a month and buy a Circle Pad Pro, or install a PSP analog stick. We’re not sure how this would work – the Circle Pad Pro works over IR, and we’re not seeing an IR transmitter on this build. Here’s the source if anyone wants to give this a shot.