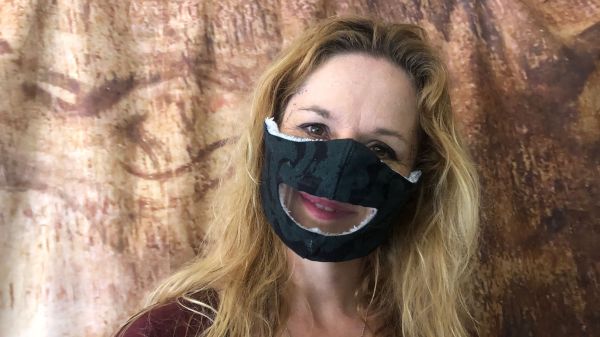 Humans continuously communicate with our bodies, and face masks cover one of the most expressive parts. For some, this is a muffler on strangers, but devastating for people who rely on lip-reading. Several masks exist that have a clear window for precisely this purpose, but they’re specialty and high-demand. [Erin St Blaine] over at Adafruit shows how she makes windowed masks with stuff you may already have in your house. Even if your sewing machine is locked up the local maker-space, you are in luck, because you don’t need a single stitch. For the thread-inclined, it is easy to tweak the recipe.

The part of the mask that touches your face is terry cloth, but any breathable cotton towel should work. There is a PDF in the instructions where you can print templates in four sizes. You will also find a cutout for the plastic window salvaged from your cold soft drink cup. A water bottle should work too. Flexible glue holds the fabric together, but to attach the ear-loops, we fall back on our old friend, the red Swingline. If you don’t have that color and brand, any stapler will do in a pinch. Don’t forget to add some defogger and keep smiling.

Wear your homemade mask proudly and fasten it well, but not too fast.

END_OF_DOCUMENT_TOKEN_TO_BE_REPLACED 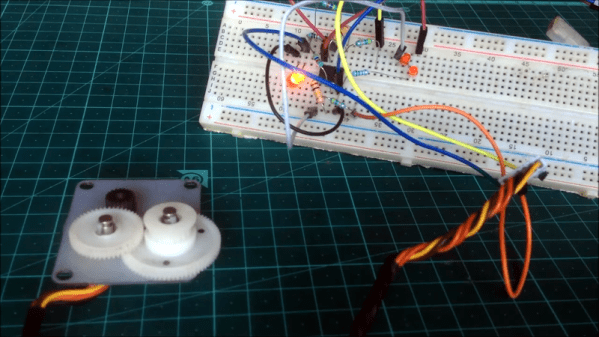 It isn’t hard to imagine a scenario where you are stuck at home all day with nothing to do and certain items are in short supply. Sure, bathroom tissue gets all the press, but try buying some flour or a freezer and see how far you get. Plus online shopping has given up on next day delivery for the duration. Not hard to imagine at all. Now suppose your latest self-quarantine project needs a rotary shaft encoder. Not having one, what do you do? If you are [Tech Build] you go all MacGyver on an old printer and pull out a stepper motor.

How does a stepper motor turn into an encoder? Well, that’s the MacGyver part. We are not big fans of the physical circuit diagrams, but it looks like [Tech Build] borrowed (with credit) from an earlier post and that one has a proper schematic.

END_OF_DOCUMENT_TOKEN_TO_BE_REPLACED

What hacker doesn’t want a plasma cutter? Even if you aren’t MacGyver, you can probably build this one in a few minutes using things you have on hand. The catch? You probably can’t cut anything more than tin foil with it, and it is probably more a carbon-air arc gouger (which uses plasma) than a true plasma cutter. Still, as [Little Shop of Physics] shows on the video, it does a fine job of slicing right through foil.

If you are like us, you are back now after getting four 9V batteries, some tin foil, a pencil lead, and some clip leads and trying it. If you have more self-restraint than we do, you might want to think about what you are going to put the tin foil over. In the video, they used a laundry basket and a rubber band, but anything that keeps the foil suspended would do the trick.

Although it isn’t really a practical plasma cutter, we were thinking about strapping something like this to a 3D printer and cutting foil stencils. The jagged edges on the video are, hopefully, more from being operated by hand and less from the jagged mini-lightning bolt vaporizing the foil.

END_OF_DOCUMENT_TOKEN_TO_BE_REPLACED 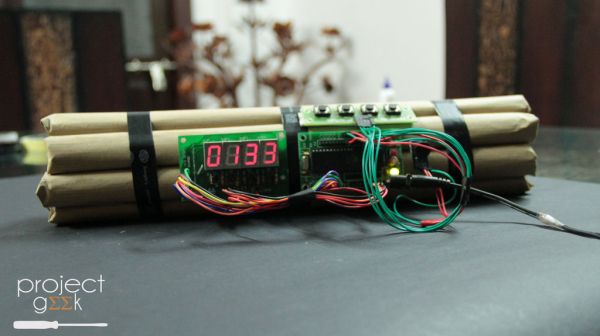 [Jenn’s] family is a single-car household. Because of this, it’s a little more difficult to get a jump start when the headlights run down the battery. Not wanting to ask the neighbors for help, her husband [Richard] decided to come up with his own solution.

Rummaging through the parts on hand, [Richard] went with his old friend Sonic the Hedgehog. He used two 12-volt, 1 amp Sega Genesis power adapters in parallel hooked up to a 12 volt, 3 amp  power supply. The end result is a 12-volt 5 amp source hooked to the car’s electrical system and used to get their road machine started.

We have enjoyed some of [Richard’s] offerings in the past, such as Super Nintoaster and the Super Genintari but this is a bit less… eloquent. A few questions do come to mind. First of all, is this the best way to use parts of your 20-year-old gaming system?  How many amps does your average car starter pull down?  And finally, what kind of issues are we looking at with the lead acid battery under these conditions?  Weigh in on the conversation in the comments.

What can you build with a ballpoint pen and some extra parts? [gzip] found himself with a bonus box of right angle switches and other miscellaneous parts and set out to build a joystick. Simple arcade joysticks use switches that are actuated by the movement of the stick and this design embraces the concept. The four tactile switches are mounted on protoboard facing each other with part of a ballpoint pen in the middle. When the pen is moved it presses against one or more switches to close, completing a circuit. For good measure he even incorporated a fire button into the top of the “stick”. Now we just need someone to make this work with a tiny Ms. Pac-Man emulator.