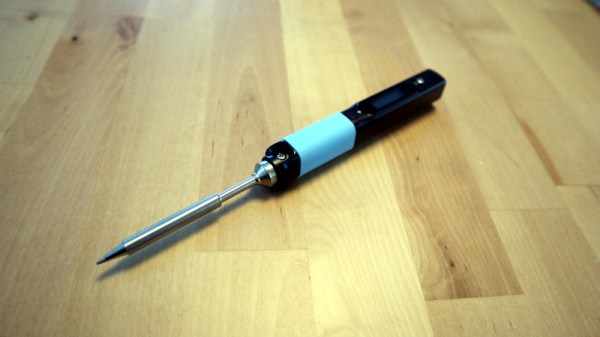 I put the Pinecil through its paces, and and although the device is fully open source, give it a teardown for good measure. Spoiler: it’s my new favorite.
END_OF_DOCUMENT_TOKEN_TO_BE_REPLACED

The TS100 smart soldering iron may have some new competition. Pine — the people best known for Linux-based phones and laptops — though the world needed another smart soldering iron so they announced the Pinecil — Sort of a knock off of the TS100. It looks like a TS100 and uses the same tips. But it does have some important differences.

It used to be a soldering iron was a pretty simple affair. Plug in one end; don’t touch the other end. But, eventually, things got more complicated and you wanted some way to make it hotter or cooler. Then you wanted the exact temperature with a PID controller. However, until recently, you didn’t care how much processing power your soldering iron had. The TS100 changed that. The smart and portable iron was a game-changer and people not only used it for soldering, but also wrote software to make it do other things. One difference is that the device has a RISC-V CPU. Reportedly, it also has better ergonomics and a USB C connector that allows for UART, I2C, SPI, and USB connections. It also has a very friendly price tag of $24.99.