For the longest time, the creators of the Arduino have been looking at how to bring the Arduino platform into the cloud. Ethernet and WiFi shields technically work, but if you’re processing data scraped from a web page, a lowly microcontroller really isn’t the best option. Enter the Arduino YUN. At its core, it’s a regular old Arduino Leonardo. Underneath that metal plate on the board? That’s an SoC running Linux.

Basically, the Linux side of the Yun is pretty similar to a WiFi router running OpenWRT. There’s a USB port for plugging in peripherals, native WiFi support (802.11n, even!), an Ethernet connector, and enough RAM to do all the interesting stuff a small computer connected to the Internet can do.

To make all this web programming easier for Arduino neophytes, the YUN also includes a ‘bridge’ library that automates HTTP transactions between the Linux and microcontroller sides of the YUN. There’s also support for Temboo, an SDK for dozens of APIs that interact with Facebook, Dropbox, FedEx, and hundreds of other web services.

Below you can check out [Massimo] and [David] showing off their wares and going over how the YUN connects to the Internet and interacts with the microcontroller over the ‘bridge’. It’s an interesting device, and something we’ll surely check out at the World Maker Faire.

END_OF_DOCUMENT_TOKEN_TO_BE_REPLACED 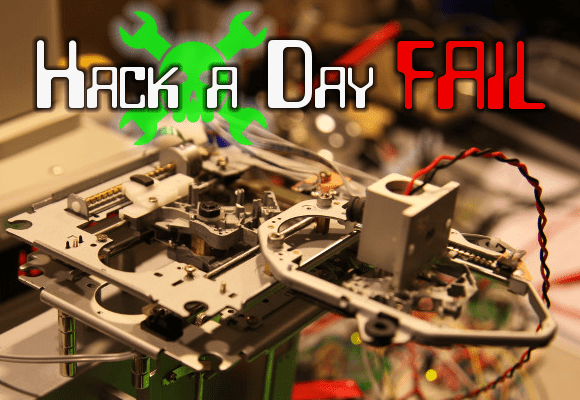 This Fail of the Week is really only a failure because of the standards to which [eLabz] holds himself. The rig pictured above is a laser cutter built out of DVD drive parts. It goes above and beyond most of the optical drive CNC projects we see around here — it actually makes cuts! But [eLabz] looks on it as a failure because the steps of the driver motors are visible as jagged edges in those cuts. We see this more as a pausing point in the development process before the next refinement is made.

END_OF_DOCUMENT_TOKEN_TO_BE_REPLACED We have covered many do it yourself PCBs before, but this video guide adds an easy way to sink heat from high power devices, which we think you might find handy.

It is a very simple process that [CNLohr] uses to keep his small RGB LED projects from overheating. It starts by using a readily available silicone thermal sheet as the substrate by applying it to copper foil. He then applies a toner-transfer circuit pattern to the copper by running the pair through a modified laminator a few times. He makes note that you have to apply the plastic backing side of the silicone sheet to the copper foil to prevent the laminator from chewing it up.

After the typical ferric chloride etching process is complete, he then uses 220 grit sandpaper to remove the toner pattern. Often steel wool is used, but because of the sensitive nature of the silicone, sandpaper works better to avoid peeling up traces.

We have featured [CNLohr] before, as he does some top-notch tutorials in his workshop — which makes for both a fascinating and distracting backdrop for the videos. This one is a bit long (~20 minutes), but is very thorough and goes through the entire process from start to finish. Check it out after the break.

END_OF_DOCUMENT_TOKEN_TO_BE_REPLACED

We’ve seen some light painting before – waving a microcontroller and LED strip in front of a camera is a very interesting project after all. [Saulius]’ light painting stick is unlike anything we’ve seen before, though. It’s huge – four meters high, and is also very flexible in the field, drawing images served up from a smart phone.

To get his pictures onto his light painting stick, [Saulius] used the very cool Carambola, an exceedingly small board that also runs Python. The images were converted to a 128xWhatever .BMP file served to the Carambola over WiFi with a smart phone, Since the Carambola runs Linux, sometimes a kernel interrupt would mistakenly restart the drawing process. [Saulius] found a way around that by writing the drawing code in C and wrapping that in a Python module. The speed of C and the flexibility of Python, who could ask for more.

On the project page, you can see [Saulius] pulling off some very cool light paintings. Even though the Hackaday logo is the best way to get on the front page here, this pic is probably the most impressive Greenhouse owners might find [David Dorhout]’s latest invention a groundbreaking green revolution! [David]’s Aquarius robot automates the laborious process of precision watering 90,000 square feet of potted plants. Imagine a recliner sized Roomba with a 30 gallon water tank autonomously roaming around your greenhouse performing 24×7 watering chores with absolute perfection. The Aquarius robot can do it all with three easy setups; add lines up and down the aisles on the floor for the robot to follow, set its dial to the size of your pots and maybe add a few soil moisture sensors if you want the perfect amount of water dispensed in each pot. The options include adding soil moisture sensors only between different sized plants letting Aquarius repeat the dispensing level required by the first plant’s moisture sensor for a given series.

After also digging through a pair of forum posts we learned that the bot is controlled by two Parallax propeller chips and has enough autonomous coding to open and close doors, find charging stations, fill its 30 gal water tank when low, and remember exactly where it left off between pit stops. We think dialing in the pot size could easily be eliminated using RFID pot identification tags similar in fashion to the Science Fair Sorting Project. Adjusting for plant and pot size as well as location might easily be automated using a vision system such as the featured Pixy a few weeks back. Finally, here are some featured hardware hacks for soil moisture sensing that could be incorporated into Aquarius to help remotely monitor and attend to just the plants that need attention: [Andy’s] Garden sensors, [Clover’s] Moisture control for a DIY greenhouse, [Ken_S’s] GardenMon(itoring project)

[David Dorhout] has 14 years experience in the agriculture and biotech industry. He has a unique talent applying his mad scientist technology to save the future of mankind as seen with his earlier Prospero robot farmer. You can learn more about Aquarius’s features on Dorhout R&D website or watch the video embedded below.

END_OF_DOCUMENT_TOKEN_TO_BE_REPLACED 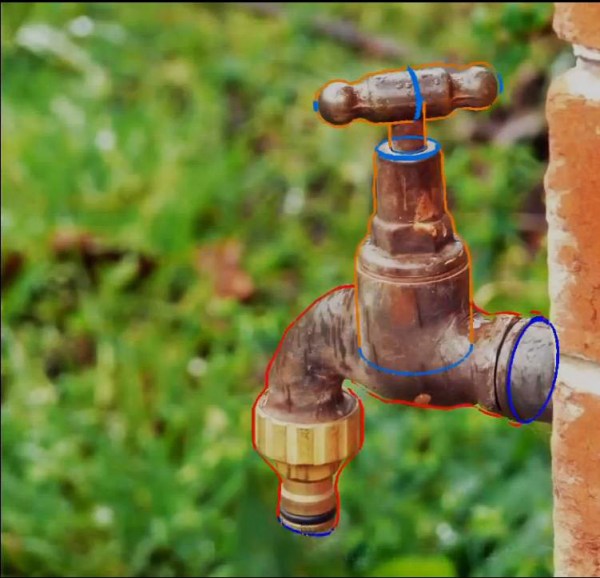 As 3D printing continues to grow, people are developing more and more ways to get 3D models. From the hardware based scanners like the Microsoft Kinect to software based like 123D Catch there are a lot of ways to create a 3D model from a series of images. But what if you could make a 3D model out of a single image? Sound crazy? Maybe not. A team of researchers have created 3-Sweep, an interactive technique for turning objects in 2D images into 3D models that can be manipulated.

To be clear, the recognition of 3D components within a single image is a bit out of reach for computer algorithms alone. But by combining the cognitive abilities of a person with the computational accuracy of a computer they have been able to create a very simple tool for extracting 3D models. This is done by outlining the shape similar to how one might model in a CAD package — once the outline is complete, the algorithm takes over and creates a model.

The software was debuted at Siggraph Asia 2013 and has caused quite a stir on the internet. Watch the fascinating video that demonstrates the software process after the break!