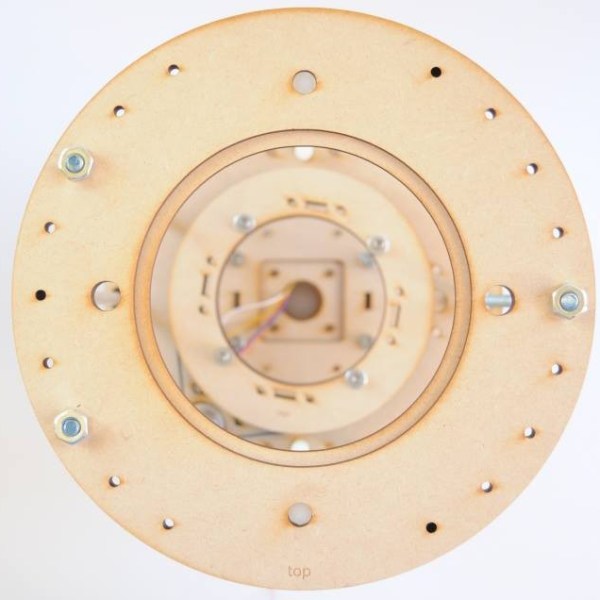 Magnetic resonance imaging devices are one of the most fantastically incredible machines humans have ever built. They’re capable of producing three-dimensional images of living tissue by flipping protons around with a magnetic field. Ninety percent of the population doesn’t know what that sentence means, yet you can find an MRI machine inside nearly any reasonably equipped hospital in America.

For his Hackaday Prize entry, [Peter Jansen] is building a magnetic resonance imager, capable of producing the same type of images you’d get from the radiology department at a hospital. It’s going to be a desktop unit, capable of scanning fruit and other similarly sized objects, and can be built using tools no more advanced than a hot air gun and a laser cutter.

This project is a continuation of what should have been [Peter]’s Hackaday Prize entry last year. Things got busy for him last summer, he dropped out of the Hackaday Prize, which means he’s welcome to continue his build this year.

Last year, [Peter] developed the plywood mechanism that would rotate a magnetic sensor across the diameter of the scanning volume, rotate the object to be scanned, and lift the object through the volume. It’s a weird 3-axis CNC machine, basically, but the parts near the magnetic sensor can’t be made out of metal. Dental floss worked okay, but we have a few hundred feet of Spectra fishing line if we ever bump into [Peter]. Magnetic resonance imaging means big coils of wire, too, which means the tedious task of winding coils around a cylinder is part of the build. [Peter] built a machine to do the work for him.

This is not [Peter]’s first attempt at building an imaging device. He built a desktop CT scanner that is exceptionally slow, but does shoot radiation through fruit to produce an image. His first project on Hackaday.io was the Open Source Science Tricorder, one of the top five finalists in the first year of the Hackaday Prize.

Already, [Peter] has some amazing work under his belt that produces real data that could not be otherwise obtained. An Open Source MRI is the perfect project for the Hackaday Prize’s Citizen Science phase, and we’re very happy to see him enter this project.

If you’ve taken any digital signal processing classes at a college or university, you’ve probably been exposed to MATLAB. However, if you want to do your own work, you might think about Linux and one of the many scientific computing applications available for it.

[David Duarte] recently published a three-part tutorial on using Octave to do scientific audio processing. The first part covers basic reading, writing, and playing of audio files. Part two covers synthesis of signals, plotting, and some basic transformations.  Modulation is the topic of the third part. If you prefer your tutorials on video, you can check out the video below.

We’ve talked about MATLAB before in the context of message cracking. Then again, some of the best signal processing is done by humans. If you don’t like Octave, you might try Scilab, another Linux package that is similar. There’s also Freemat, Sage, and Spyder. Of course, you can also run MATLAB under Linux. 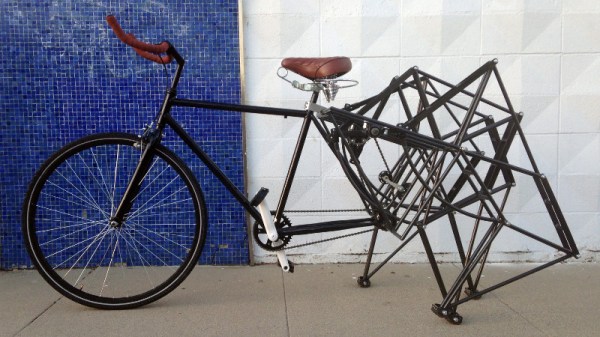 “If you’re asking ‘why,’ you don’t get it.” So said [JP] when he told us about his strandbeest bicycle build. After all, who in their right mind would graft a complex multi-leg mechanical walking mechanism to the rear end of a perfectly good bicycle? But to expand on his sentiment, to not understand his creation is to miss the whole essence of our movement. Sometimes you just have to make something, because you can.

If you aren’t familiar with the strandbeest, it is the creation of Dutch artist [Theo Jansen]. Complex skeletal walking machines powered by the wind, that in the case of [Jansen]’s machines autonomously roam the beaches of the Netherlands. Hence the name, from Dutch: “Beach beast”.

[JP]’s strandbeest bike came together over 8 months of hard work. It started with a conceptual CAD design and 3D print, and progressed through many iterations of fine-tuning the over 400 parts required to put four legs on the back of a bicycle frame. It’s an impressive achievement and it is fully rideable, though we suspect we won’t be seeing it at the Tour de France any time soon.

He’s posted several videos of the bike in action, you can see one of them below the break.

END_OF_DOCUMENT_TOKEN_TO_BE_REPLACED

[jamesone111] bought a Transcend WifiSD card, presumably for photography, but it may just have been because he heard that they’re actually tiny Linux servers.

He read a post about these cards on the OpenWRT forums. They’re all a similar configuration of a relatively large amount of memory (compared to the usual embedded computer), a WiFi chip, and an ARM processor running a tiny Linux install. The card acts as a WiFi access point with a little server running on it, and waits for the user to connect to it via a website. It also has a mode where it will connect to up to three access points specified by the user, but it doesn’t actually have a way to tell the user what its IP address is; which is kind of funny.

[jamesone111] hacked around with the Transcend card for a bit. He found it pretty insecure, which as long as you’re not a naked celebrity, shouldn’t be a huge issue. For the hacker this is great as it opens up the chance of hacking the firmware for other uses.

Some have already pulled off some cool hacks with these cards. For example, [peterburk] hacked a similar card by PQI to turn his iPod into a portable file server.

The year was 1996, the European Space agency was poised for commercial supremacy in space. Their new Ariane 5 Rocket could launch two three-ton satellites into space. It had more power than anything that had come before.

The rocket rose up towards the heavens on a pillar of flame, carrying four very expensive and very uninsured satellites. Thirty-seven seconds later it self destructed. Seven billion dollars of RUD rained down on the local beaches near the Guiana Space Centre in  South America. A video of the failed launch is after the break.

The cause of all this was a single improper type cast in a bit of code that wasn’t even supposed to run during the actual launch. Talk about a fail.

There were two bits of code. One that measured the sideways velocity, and one that used it in the guidance system. The measurement side used a 64 bit variable, but the guidance side used a 16 bit variable. The code was borrowed from an earlier, slower rocket whose velocity would never grow large enough to exceed that 16 bits. The Ariane 5, however, could be described with a Daft Punk song, and quickly overflowed this value.

The code that caused the overflow was actually a bit of pre-launch software that aligned the rocket. It was supposed to be turned off before the rocket firing, but since the rocket launch got delayed so often, the engineers made it timeout 40 seconds into the launch so they didn’t have to keep restarting it.

The ESA never placed blame on a single contractor. The programmers had made assumptions. The engineers had made reasonable shortcuts to make their job easier. It had all made it through inspections, approvals, and finally the launch event.

They certainly learned from the event; the Ariane 5 rocket has flown 82 out of 86 missions successfully since then. It has at least five more launches contracted before it is retired in 2023 for the Ariane 6 rocket being developed now. This event also changed the way critical software and redundant systems were tested, bringing the dangers of code failure to the attention of the public for the first time.

If you want to read more, there is a great discussion on Reddit which tipped us off to this fail, a quite thorough Wikipedia article, and the original article that ran in the New York Times is mirrored here.

END_OF_DOCUMENT_TOKEN_TO_BE_REPLACED

We weren’t going to run this one, because, well, it’s just ridiculous. But enough of you have browbeat us by sending in tips to the tipline that we’re going to capitulate. We’re not going to name you all by name, because really, you should be ashamed of yourselves. But you know who you are!

[Styropyro] does a lot of crazy things on YouTube. We really liked his “stuff in a microwave oven” series. He’s also obsessed with lasers and popping black balloons. So he took the laser heads out of four DLP computer projectors (the ones with 24 of those 1.5W Nichia diodes) and combined them. Yup, 200W of 445nm blue.

Then he just straps them together and passes them through a lens. It’s not a tight beam, but this thing is really bright. Even though the beam is very loosely focused, it burns stuff. That’s about all you can say. Lots of laser. Boy Howdy!

OK, there, we ran it. Don’t do this at home. It doesn’t require much finesse, and it’s going to get someone blind. Much better to expend your efforts on something more civilized like a projector. At least then you can play vector games on the wall. And stay off my lawn!!! (Kids these days…)

For those that do want to burn stuff, [Joshua Vasquez] published an article yesterday about building a safe laser cutter… much more worth your energy than anything billed as a laser bazooka.

END_OF_DOCUMENT_TOKEN_TO_BE_REPLACED 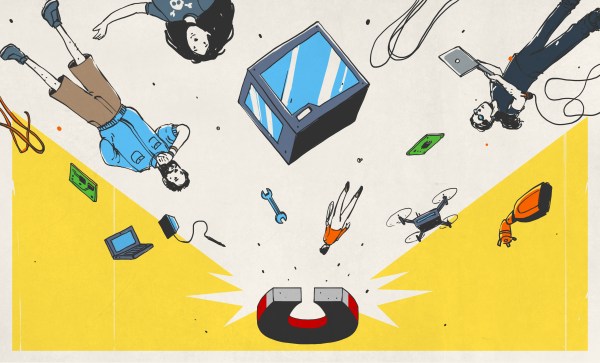 Makerspace North is unique out of the 5 makerspaces in the Ottawa, Canada area in that it started life as an empty 10,000 square foot warehouse with adjoining office spaces and large open rooms, and has let the community fill it, resulting in it having become a major hub for makers to mix in all sorts of ways, some unexpected.

Many makerspaces are run by an organization that provides tools that groups or individuals use, along with qualification courses for select tools. Makerspace North, on the other hand, provides the space and lets the community provide the maker component. The result is a variety of large scale events from indoor drone flying and various types of maker faire style days, to craft shows, garage sales, and even concerts. Smaller meet-ups, most often open to anyone, are held by such groups as the Ottawa Robotics Club and the Ottawa Electronics Club as well as some more general ones. Courses offered by the community are also as varied.

This also means that the owners of Makerspace North don’t provide tools for people to use, but instead provide dedicated rental space. That doesn’t mean there aren’t tools — it means that Makerspace North encompasses a microcosm of various renters who fill out the task of things like tool rental. This is just one example of how the community has embraced the unique approach. Let’s take a closer look at that and a few other novelties of this system.