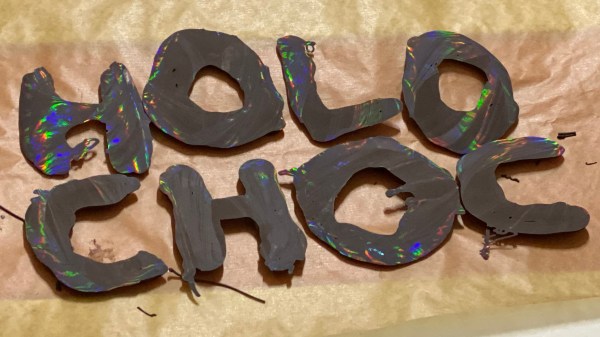 Here’s a great picture from [Jelly & Marshmallows] that shows off the wild effects of melted chocolate poured onto a diffraction grating. A diffraction grating is a kind of optical component whose micro-features act to disperse and scatter light. Diffraction gratings are available as thin plastic film with one side that is chock full of microscopic ridges, and the way light interacts with these ridges results in an iridescent, rainbow effect not unlike that seen on a CD or laserdisc.

It turns out that these micro-ridges can act as a mold, and pouring chocolate over a diffraction grating yields holo-chocolate. These photos from [Jelly & Marshmallows] show this effect off very nicely, but as cool as it is, we do notice that some of the letters seem a wee bit hit-or-miss in how well they picked up the diffraction grating pattern.

Fortunately, we know just what to suggest to take things to the next level. If you want to know more about how exactly this effect can be reliably accomplished, you’ll want to check out our earlier coverage of such delicious optics, which goes into all the nitty-gritty detail one could ever want about getting the best results with either melted sugar, or dark chocolate. 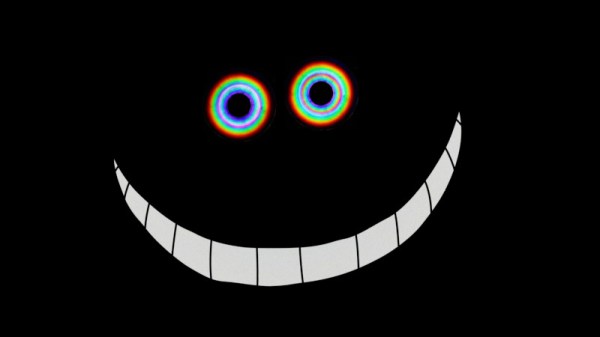 The 1960s were, in Western culture, a time of great social and political upheaval, and the dawning of the psychedelia subculture. This resulted in an art style consisting of bright colours in wild, shifting designs. [Afraser-kruck] has built a device capable of generating beautiful rainbow light patterns, which he calls Mesmer-Eyes.

The device uses two CDs, stripped of their reflective coating. This leaves the plastic layer behind, which appears to be acting as a circular diffraction grating. By passing light from a flashlight through a CD, a dazzling rainbow vortex is created, and the effect is even further improved by adding a second disc. The patterns can be moved and shifted by changing the distance between the discs themselves, as well as the flashlight. This is achieved through the use of a sled that slides on PVC pipes, holding each individual element.

It’s a build of a kind we haven’t seen before, and is put to good use as a creepy Halloween decoration, imitating the famous Cheshire Cat. It’s one we can’t wait to tackle ourselves, and we wonder how difficult it would be to turn it into a projection, or a larger scale design.

Creepy eyes remain a Halloween staple; we’ve featured them before. Video after the break.

END_OF_DOCUMENT_TOKEN_TO_BE_REPLACED 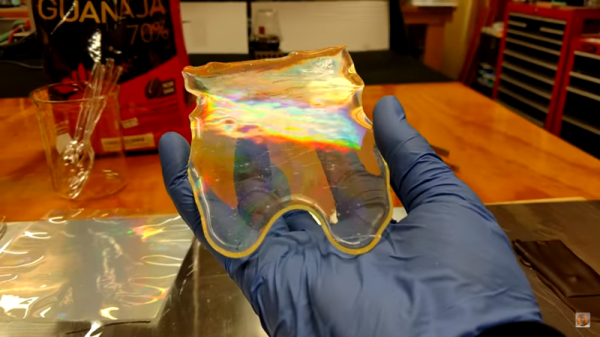 Diffraction gratings are curious things. Score a series of equally spaced tiny lines in a surface, and it will cause reflected or transmitted light to bend and separate into its component wavelengths. This ability gives them all manner of important applications in the field of optics, but they’re also fun to play with. [Tech Ingredients] has done the hard work to find out how to make them out of candy!

The video starts with a basic discussion on the principles of diffraction gratings. The basis of the work is a commonly available diffraction grating, readily available online. It’s a plastic sheet with thousands of microscopic ridges scored into the surface. The overarching method to create a candy version of this is simple — coat the ridged surface in liquid chocolate or sugar syrup, to transfer the impression on to the candy surface when it solidifies. However, the video goes further, explaining every step required to produce a successful end result. The attention to detail is on the level of an industrial process, and shows a mastery of both science and candy processing techniques. If you’ve ever wondered how to properly crystallize chocolate, this video has the knowledge you need.

It’s not often we see candy optics, but we like it — and if you fail, you can always eat your mistakes and try again. If you’re wondering what you can do with a diffraction grating, check out this DIY USB spectrometer.