Stop me if this sounds familiar. You are interested in 3D printing but lacked a clear idea of what was involved. Every time you looked into it, it returned to the back burner because after spending your limited free time researching, it still looked like a part time job just to get up to speed on the basics. If this is you, then you’re exactly the reason I say the following: despite 3D printing being more accessible than ever, getting started remains harder than it needs to be. It’s a shame, because there are smart, but busy, people just waiting for that to change. 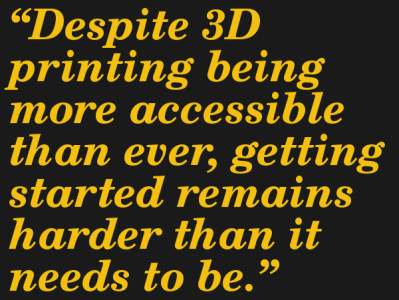 A highly technical friend and colleague of mine had, off and on, been interested in 3D printing for some time. He had questions, but also didn’t have a very good understanding of the basics because it’s clumsy and time-consuming to research something when one doesn’t even know the right terms.

I told him to video call me. Using my phone I showed him the everyday process, from downloading a model to watching the first layer get put down by the printer. He had researched getting started before, but our call was honestly the first time he had ever seen a 3D printer’s actual workflow, showing hands-on what was involved from beginning to end. It took less than twenty minutes to give him a context into which he could fit everything else, and from where he felt comfortable seeking more information. I found out later, when I politely inquired whether he had found our talk useful, that he had ordered a Prusa MK3S printer later that same day.

It got me thinking. What from our call was important and useful, but not available elsewhere? And why not?

END_OF_DOCUMENT_TOKEN_TO_BE_REPLACED

ESP32 is the hottest new wireless chip out there, offering both WiFi and Bluetooth Low Energy radios rolled up with a dual-core 32-bit processor and packed with peripherals of every kind. We got some review sample dev boards, Adafruit and Seeed Studio had them in stock for a while, and AI-Thinker — the company that makes the most popular ESP8266 modules — is starting up full-scale production on October 1st. This means that some of you have the new hotness in your hands right now, and the rest of you aren’t going to have to wait more than a few more weeks.

As we said in our first-look review of the new chip, many things are in a state of flux on the software side, but the basic process of writing, compiling, and flashing code to the chip is going to remain stable. It’s time to start up some tutorials!

END_OF_DOCUMENT_TOKEN_TO_BE_REPLACED

The workbench. We’re always looking for ways to make the most out of the tools we have, planning our next equipment purchase, all the while dealing with the (sometimes limited) space we’re allotted. Well, before you go off and build your perfect electronics lab, this forum thread on the EEVblog should be your first stop for some extended research.

You’ll find a great discussion about everything from workbench height, size, organization, shelf depth, and lighting, with tons of photos to go with it. You’ll also get a chance to peek at how other people have set up their labs. (Warning, the thread is over 1000 posts long, so you might want to go grab a snack.)

We should stop for a moment and give a special note to those of you who are just beginning in electronics. You do not need to have a fancy setup to get started. Most of these well equipped labs is the result of being in the industry for years and years. Trust us when we say, you can get started in electronics with nothing more than your kitchen table, a few tools, and a few parts. All of us started that way. So don’t let anything you see here dissuade you from jumping in. As proof, we’ve seen some amazingly professional work being done with the most bare-bones of tools (and conversely, we seen some head-scratching projects by people with +$10,000 of dollars of equipment on their desk.)

Here’s some links that you might find handy when setting up a lab. [Kenneth Finnegan] has a great blog post on how his lab is equipped. And [Dave Jones] of the EEVblog has a video covering the basics. One of the beautiful things about getting started in electronics is that used and vintage equipment can really stretch your dollars when setting up a lab. So if you’re looking into some vintage gear, head on over to the Emperor of Test Equipment. Of course no thread about workbenches would be complete with out a mention of Jim Williams’ desk. We’ll leave the discussion about workbench cleanliness for the comments. Are you looking for a good source of information to get started into making and hacking electric circuits? We would like to refer you to Lessons in Electric Circuits. Even if you have good knowledge of electronics, this is another tool you can use. The book is a work in progress and will have some incomplete and pending areas, but the basic theory parts to get started are all there. It has six volumes: DC, AC, Semiconductors, Digital, Reference, and Experiments. The DC and AC volumes are the most complete. If your eyes are already glazing over thinking you already know all of this stuff, then the most interesting volume for you may be the Experiments, which contains a number of sample circuits like transistor amplifiers and 555 timer circuits. The best part of this book it that it is free, but as with most free things, you can make it better by contributing.