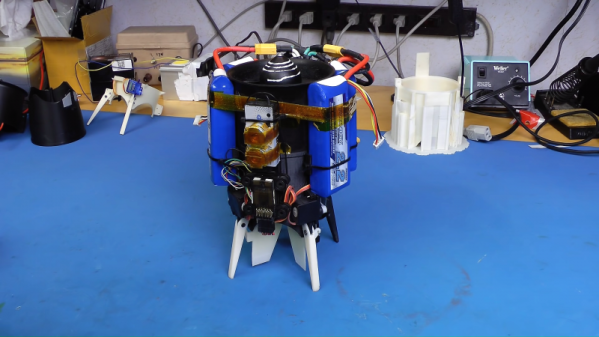 We’re not entirely sure what to call this one. It’s got the usual trappings of a drone, but with only a single rotor it clearly can’t be called by any of the standard multicopter names. Helicopter? Close, but not quite, since the rotor blades are fixed-pitch. We’ll just go with “monocopter” for now and sort out the details later for this ducted-fan, thrust-vectored UAV.

Whatever we choose to call it — builder [tesla500] dubbed it the simultaneously optimistic and fatalistic “Ikarus” — it’s really unique. The monocopter is built around a 90-mm electric ducted fan mounted vertically on a 3D-printed shroud. The shroud serves as a mounting point for the landing legs and for four servos that swivel vanes within the rotor wash. The vanes deflect the airstream and provide the thrust vectoring that gives this little machine its control.

Coming to the correct control method was not easy, though. Thanks mainly to the strong gyroscopic force exerted by the rotor, [tesla500] had a hard time getting the flight controller to cooperate. He built a gimballed test stand to work the problem through, and eventually rewrote LibrePilot to deal with the unique forces on the craft and tuned the PID loops accordingly. Check out the results in the video below.

Some attempts to reduce the number of rotors work better than others, of course, but this worked out great, and we’re looking forward to the promised improvements to come.

END_OF_DOCUMENT_TOKEN_TO_BE_REPLACED 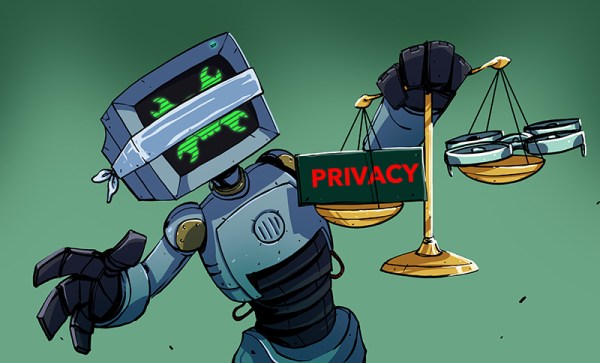 Over the last few weeks we’ve waded through the debate of Drone restrictions as the FAA announced, solicited comments, and finally put in place a registration system for Unmanned Aerial Systems (UAS). Having now had a week to look at the regulation, and longer to consider the philosophy behind it, I don’t think this is a bad thing. I think the FAA’s move is an early effort to get people to pay attention to what they’re doing.

The broad picture looks to me like a company trying to get users to actually read an End User Licensing Agreement. I’m going to put the blame for this firmly on Apple. They are the poster children for the unreadable EULA. Every time there is an update, you’re asked to read the document on your smartphone. You scroll down a bit and think it’s not that long, until you discover that it’s actually 47 pages. Nobody reads this, and years of indoctrination have made the click-through of accepting an EULA into a pop-culture reference. In fact, this entire paragraph has been moot. I’d bet 99 out of 103 readers knew the reference before I started the explanation.

So, we have a population of tech adopters who have been cultivated to forego reading any kind of rules that go with a product. Then we have technological advancement and business interests that have brought UAS to the feet of the general public both with low costs, wide availability, and pop-culture appeal. What could possibly go wrong? Let’s jump into that, then cover some of the other issues people are concerned about, like the public availability of personal info on the drone registry.

END_OF_DOCUMENT_TOKEN_TO_BE_REPLACED

The first talk of ShmooCon was [Ethan O’Toole] and [Matt Davis] presenting their OpenVulture software for unmanned vehicles. In the initial stages, they had just planned on building software for Unmanned Aerial Vehicles, but realized that with the proper planning it could be used with any vehicle: airplanes, cars, boats, and subs (or more specifically, their Barbie PowerWheels). The software is in two parts. First is a library that lets you communicate with each of the vehicle’s modules. The second half is the actual navigation software.

They’ve spent a lot of time sourcing hardware modules. They are looking for items that work well, aren’t too expensive, and have a fairly plug and play implementation. For their main processor, they wanted something that wasn’t a microcontroller and could run a full Linux system. The ARM based NSLU2 NAS seems to be the current frontrunner. You can find the opensource software and descriptions of the supported modules on their site.

They’re building the first test UAVs now. One has a 12 foot wingspan for greater lift and stability. We’ve covered the Arduino based Ardupilot and other UAVs in the past.