Computational Fluid Dynamics, or CFD, and is applied to everything from aircraft design to how good of a wing a new skyscraper will be. Of course, the science of building airfoils is much older than CFD, leading to the question of how airfoil design was done before computers.

The answer, of course, is a wind tunnel. Walk around a few very good air museums, and you’ll find wind tunnels ranging from the long wooden boxes built by the Wright brothers to fantastic plywood contraptions that are exceptionally interesting to woodworkers.

[Joel] needed final project as an upcoming aeronautical engineer, but he wanted his project to be something physical, and a tool that could be used again. He decided to build a wind tunnel that’s also his entry for The Hackaday Prize.

This wind tunnel isn’t a gigantic device the size of a building. The very first wind tunnels were simple devices just a few meters long. With a fan at one end, a section to stabilize the wind, a chamber, and a place for the air to go, it’s also a very simple device. Just because something is simple doesn’t mean anyone has built one recently, though: [Joel] couldn’t find anyone who built a wind tunnel with step-by-step instructions. This project is just that – an Open Source wind tunnel.

The design of this wind tunnel is simple enough, built out of fiberglass with relatively simple molds. The design can be adapted to various electric fans, and the most fun part of the build – the smoke machine – is already complete.

Sometimes, a simple fix is the best solution. Lacking extra funds for a proper remote-controlled gate-opener after the recent purchase of their farm, redditor [amaurer3210] built one as a birthday gift for his wife.

Supported on pillow block housings, a 10″ wheel is connected to the motor by via a 3D printed pulley and a timing belt turned inside-out to allow for slippage — in case of obstacles or manual opening of the gate. If you’ve ever worked with belts in your builds, [amaurer3210] adds that during sizing he uses a few layers of fiberglass tape as a stand-in for the belt to avoid frustration over final belt size and tension.
END_OF_DOCUMENT_TOKEN_TO_BE_REPLACED 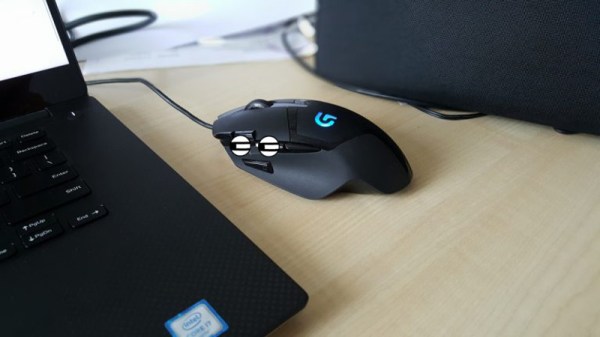 Some people really enjoy the kind of computer mouse that would not be entirely out of place in a F-16 cockpit. The kind of mouse that can launch a browser with the gentle shifting of one of its thirty-eight buttons ever so slightly to the left and open their garage door with a shifting to the right of that same button. However, can this power be used for evil, and not just frustrating guest users of their computer?

We’ve heard of the trusted peripheral being repurposed for nefarious uses before. Sometimes they’ve even been modified for more benign purposes. All of these have a common trend. The mouse itself must be physically modified to add the vulnerability or feature. However, the advanced mice with macro support can be used as is for a vulnerability.

The example in this case is a Logitech G-series gaming mouse. The mouse has the ability to store multiple personal settings in its memory. That way someone could take the mouse to multiple computers and still have all their settings available. [Stefan Keisse] discovered that the 100 command limit on the macros for each button are more than enough to get a full reverse shell on the target computer.

Considering how frustratingly easy it can be to accidentally press an auxiliary button on these mice, all an attacker would need to do is wait after delivering the sabotaged mouse. Video of the exploit after the break.

END_OF_DOCUMENT_TOKEN_TO_BE_REPLACED

Today, Design Shift has released ORWL (as in George Orwell), the first computer designed with physical security in mind. This tiny disc of a computer is designed to defeat an Evil Maid through some very clever engineering on top of encryption tools we already use.
END_OF_DOCUMENT_TOKEN_TO_BE_REPLACED 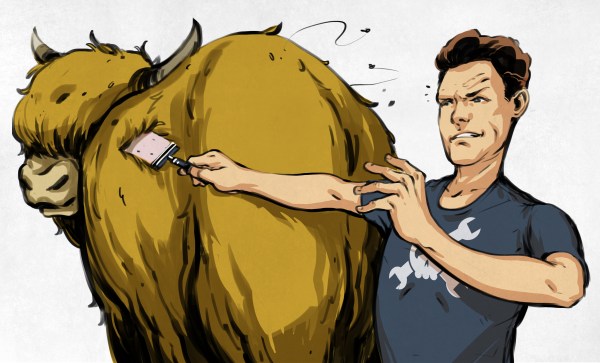 The phrase comes obliquely from a Ren and Stimpy episode, and refers to common phenomenon where to get one thing done you have to first solve another problem. The second problem, of course, involves solving a third, and so on. So through this (potentially long) chain of dependencies, what looks like shaving a yak is obliquely working on cracking some actually relevant problem.
END_OF_DOCUMENT_TOKEN_TO_BE_REPLACED

“Round up the usual suspects…”

[CNLohr] just can’t get enough of the ESP8266 these days — now he’s working on getting a version of V-USB software low-speed USB device emulation working on the thing. (GitHub link here, video also embedded below.) That’s not likely to be an afternoon project, and we should warn you that it’s still a project in progress, but he’s made some in-progress material available, and if you’re interested either in USB or the way the mind of [CNLohr] works, it’s worth a watch.

In this video, he leans heavily on the logic analyzer. He’s not a USB expert, and couldn’t find the right resources online to implement a USB driver, so he taught himself by looking at the signals coming across as he wiggled a mouse on his desk. Using the ever-popular Wireshark helped him out a lot with this task as well. Then it was time to dig into Xtensa assembly language, because timing was critical.

Speaking of timing, one of the first things that he did was write some profiling routines so that he could figure out how long everything was taking. And did we mention that [CNLohr] didn’t know Xtensa assembly? So he wrote routines in C, compiled them using the Xtensa GCC compiler, and backed out the assembly. The end result is a mix of the two: assembly when speed counts, and C when it’s more comfortable.

END_OF_DOCUMENT_TOKEN_TO_BE_REPLACED 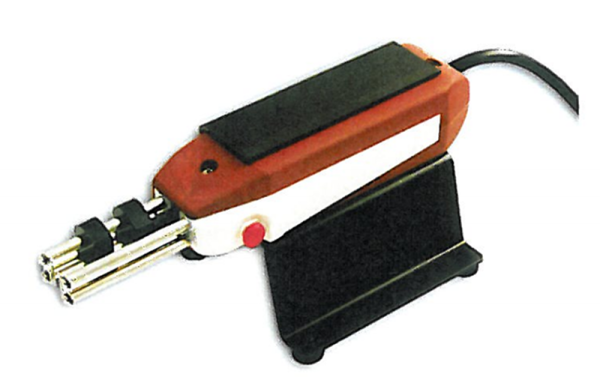 I wanted to point out a tool that I often use, but rarely see on other people’s workbenches: thermal strippers. They aren’t cheap, but once you’ve used them, it is hard to go back to stripping wires with an ordinary tool.

I know, I know. When I first heard of such a thing, I thought what you are probably thinking now: maybe for some exotic coated wire, but for regular wire, I just use a pair of diagonal cutters or a mechanical stripper or a razor blade. You can do that, of course, and for large solid wires, you can even get good results. But for handling any kind of wire, regardless of size, you just can’t beat a thermal stripper.