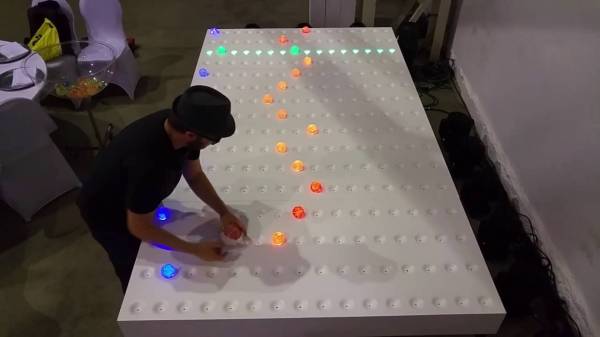 Sequencers allow you to compose a melody just by drawing the notes onto a 2D grid, virtually turning anyone with a moderate feel for pitch and rhythm into an electronic music producer. For  [Yuvi Gerstein’s] large-scale grid MIDI sequencer GRIDI makes music making even more accessible.

Instead of buttons, GRIDI uses balls to set the notes. Once they’re placed in one of the dents in the large board, they will play a note the next time the cursor bar passes by. 256 RGB LEDs in the 16 x 16 ball grid array illuminate the balls in a certain color depending on the instrument assigned to them: Drum sounds are blue, bass is orange and melodies are purple.

Underneath the 2.80 x 1.65 meters (9.2 x 4.5 foot) CNC machined, sanded and color coated surface of the GRIDI, an Arduino Uno controls all the WS2812 LEDs and reads back the switches that are used to detect the balls. A host computer running Max/MSP synthesizes the ensemble. The result is the impressive, interactive, musical art installation you’re about to see in the following video. What better tune to try out first than that of Billie Jean whose lighted sidewalk made such an impression on the original music video.

END_OF_DOCUMENT_TOKEN_TO_BE_REPLACED 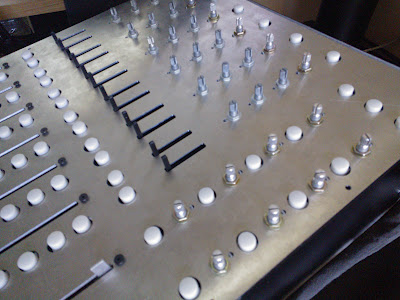 So like many followers of Hackaday, maybe you’re into electronic music. We’d dare to say though that few of you have the dedication of [adamdzak] as he decided to replicate [Sasha]‘s custom controller for the [Abelton Live] software package. Apparently it’s more difficult than taking apart your DJ Hero controller and hacking it to interface songs on your computer.

The “new” controller is named Apollo, and is meant to be a replica of Sasha’s Maven controller. The build process is well laid out in his post, and the results so far look quite incredible. What’s particularly interesting is the effort taken to reverse engineer this device without ever having been able to use it. Both from a mechanical standpoint and trying to figure out how the buttons are used to control the software must have been quite a challenge. Check out the video after the break to see this new controller in action. END_OF_DOCUMENT_TOKEN_TO_BE_REPLACED

[Lizzie] from LustLab sent in her Ball of Dub that turns a few accelerometer and a digital audio workstation and turns everything into an aural experience of wubs and dubs. The Ball of Dub can turn just about anything into dubstep, and does so with a fairly interesting user interface.

There isn’t a build log for the Ball of Dub, but  the folks at LustLab did send in a basic overview of her project. Inside the ball, there’s a Razor IMU from Sparkfun that is attached to the ever-popular XBee wireless transceiver. A tiny program on an Arduino calibrates the gyroscope and accelerometer and sends that data to the DAW at 50Hz.

The host computer is running Renoise, a very popular tracker that can accept MIDI and OSC input. A Processing app parses the ball spin, free fall and impact, averages them over a period of time, and pipes that into the OSC input of Renoise. In [Lizzie]’s video, the ball spin is sent to a low-pass filter on the baseline track, and the average impact is applied to the vocal track.

This isn’t the first time we’ve seen some fairly strange ways to modulate wub; we saw real instruments covering Skrillex earlier this month. The Ball of Dub wins in the simplicity department, though.

When we first saw the live cover of Skrillex Scary Monsters And Nice Sprites by the band Pinn Panelle, we had to know how a band is able to play live dubstep on real instruments. We emailed the band and they spilled the beans on how to process the hell out of an instrument in a live environment.

First up is the bassist, [Nathan Navarro]. He wears a Source Audio Hot Hand on his right thumb. This little box is a two-axis accelerometer that communicates with his pedal board using RF frequencies. With the Hot Hand, he has control over two parameters on Hot Hand Pedals. The envelope effect is awesome, but it’s worth noting that [Nathan] is sponsored by Source Audio. We’re thinking it would be relatively easy to cram a Wii MotionPlus and microcontroller into a wristband. Tied to a computer and MIDI interface, the homebrew solution would do the same thing.

[Derek Song] is the guitarist and he’s used multieffects for most of his musical life He has a small Bluetooth keyboard and touchpad mounted to the front of his guitar that controls just about everything on his pedal board. The Bluetooth controller sends commands to [Derek]’s computer that outputs MIDI CC messages to his pedal board.

In a studio, Pinn Panelle’s cover would be impressive. The fact that it’s being played live opens up a number of doors as to what a band can do in real-time. If you’ve got a pedal board or electronic music build, send it into the tip line. Also, check out the videos after the break for a better demo of [Derek]’s Bluetooth setup.