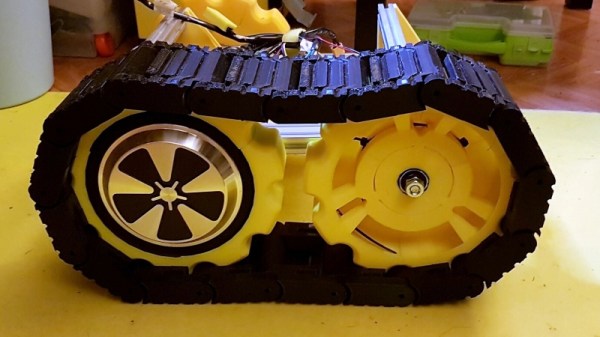 When “hoverboards” first came out, you may have been as disappointed as we were that they did not even remotely fulfill the promises of Back to the Future II. Nothing more than a fancified skateboard, hoverboards are not exactly groundbreaking technology. That doesn’t mean they’re not useful platforms for hacking, though, as this hoverboard to track-propelled robot tank conversion proves.

Most of the BOM for this build came from the junk bin – aluminum extrusions, brackets, and even parts cannibalized from a 3D-printer. But as [pasoftdev] points out, the new-in-box hoverboard was the real treasure trove of components. The motors, the control and driver electronics, and the big, beefy battery were all harvested and mounted to the frame. To turn the wheels into tracks, [pasoftdev] printed some sprockets to fit around the original tires. The tracks were printed in sections and screwed to the wheels. Idlers were printed in sections too, using central hubs and a clever method for connecting everything together into a sturdy wheel. Printed tank tread links finished the rolling gear eventually; each of the 34 pieces took almost five hours to print. The dedication paid off, though, as the 15-kg tank is pretty powerful; the brief video below shows it towing an office chair around without any problems.

We noticed that [pasoftdev] found the assembly of the tread links a bit problematic. These 3D-printed links that are joined by Airsoft BBs might make things a little easier next time.

END_OF_DOCUMENT_TOKEN_TO_BE_REPLACED

Have you heard it said that everything in Linux is a file? That is largely true, and that’s why the ability to manipulate files is crucial to mastering Linux Fu.

One thing that makes a Linux filesystem so versatile is the ability for a file to be many places at once. It boils down to keeping the file in one place but using it in another. This is handy to keep disk access snappy, to modify a running system, or merely to keep things organized in a way that suits your needs.

There are several key features that lend to this versatility: links, bind mounts, and user space file systems immediately come to mind. Let’s take a look at how these work and how you’ll often see them used.

END_OF_DOCUMENT_TOKEN_TO_BE_REPLACED

Hurry! Carve out your Hackaday.io homestead with a vanity URL. You can see I’ve already secured hackaday.io/mike, but get in before the rest of Hackaday finds out and you can you have ‘/tom’, ‘/jane’, or ‘/zerocool’. (Don’t do it… you can be more creative than zerocool!)

Whether you already have an account, or if you want to create one right now, the next time you log into Hackaday.io the interface will give you the opportunity to choose your vanity address. Like the Oklahoma land rush, we’re sure there will be a swell of folks looking to squat on the most pristine land. So if your first name is already taken, now is the perfect time to re-invent your perfect username.

For those that need a jump start picking their slug, we want to hear your favorite screen name/handle/user alias of all time in the comments. At the risk of embarassing [Jeff Keyzer], I have to say his alias (and company name) Mighty Ohm is pretty spectacular. Can anyone beat it?