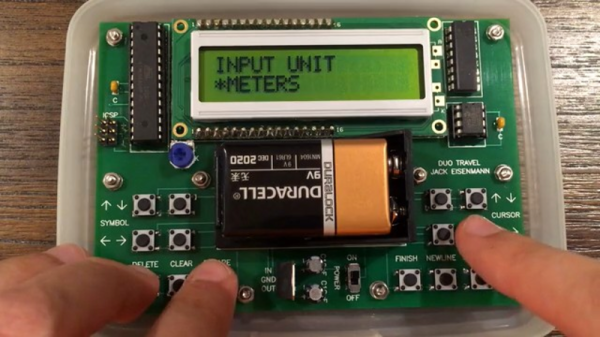 If there was one downside to 8-bit computers like the Commodore 64, it’s that they weren’t exactly portable. Even ignoring their physical size, the power requirements would likely have required a prohibitively large power bank of some sort to lug around as well. The problem of portability has been solved since the late ’70s, but if you still want that 8-bit goodness in a more modern package you’ll have to look at something like retrocomputing madman [Jack Eisenmann]’s DUO Travel computer.

The computer is based around the ubiquitous ATmega328 which should make the ease at which it is programmable apparent. Even so, its 14-button keypad makes it programmable even without another computer. While it has slightly less memory than a standard C-64, it’s still enough for most tasks. And, since its powered by a 9-volt battery it doesn’t require any external power sources either.

The most impressive part of the build, however, is the custom programming language specifically tailored for this platform. After all, a 14-button keypad wouldn’t be a great choice if you had to program in Perl or C all the time. There is some example code on the project page for anyone interested in this specific implementation. While it’s not the most minimal computer [Jack] has ever built, it’s certain to be much more practical.

END_OF_DOCUMENT_TOKEN_TO_BE_REPLACED 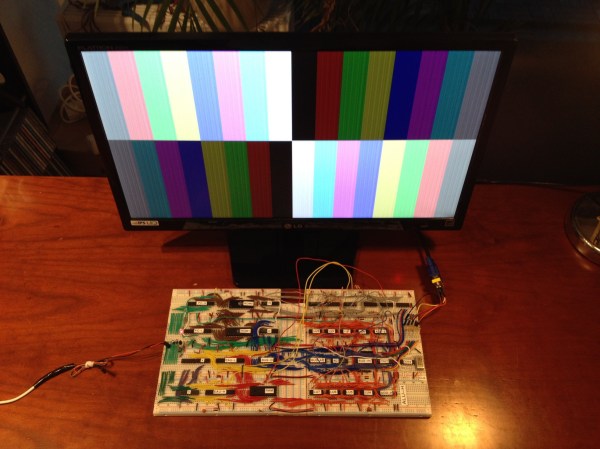 Sometimes it starts with a 555 timer and an op-amp. Other times with a small microcontroller. But the timing’s not so great and needs a dedicated timing crystal circuit. And maybe some more memory, and maybe the ATtiny should be swapped out for some 74LS-series chips. And now of course it needs video output too. Before you know it, you’re staring at a 40-chip computer that hearkens back to a simpler, yet somehow more complex, time of computing. At least that’s where [Marcel] is with his breadboard computer based on 1970s-era chips.

For what it does, this homebrew computer is relatively simple and straightforward. It gets 8 bits of processing power from 34 TTL chips. Another 6 round out the other features needed for the computer to operate. It is capable of rendering 64 colors in software and has more than enough memory for a computer of this sort. So far the only recurring problem [Marcel] has had has been with breadboard fatigue, as some of the chips keep popping out of the sockets.

This is a great project for anyone interested in homebrew or 8-bit computing, partially because of some of the self-imposed limitations that [Marcel] imposed on himself, like “only chips from the 70s”. It’s an impressive build on its own and looks to get much better since future plans call for a dedicated PCB to solve the issue with the worn-out breadboards. If you’re already invested in a project like this, don’t forget that the rabbit hole can go a little deeper: you can build a computer out of discrete transistors as well.

[Steeeve] just sent us his work on emulating a handful of 8080-based microcomputers on a Stellaris Launchpad, including the bare-metal to run Space Invaders. We know what you’re thinking: Is that all you folks are doing these days?!?!? There must be something in the water.

[Steeeve]’s build is based on the Launchpad with an external 64kB of SPI RAM, a nice little TFT display, and a built-in SD card for all of your storage needs. Add in an 8080 emulator and a keyboard and you’ve got a tiny microcomputer. (Is that redundant?)

What’s really neat about [Steeeve]’s project is that he’s cloned not just one target computer, but a whole bunch of computers including (GitHub links follow) the 8080-based UK101/Superboard, the CPM/80, and the machine that ran Space Invaders, as well as the 6502-based Commodore PET and Apple-1.  And as a bonus, you can save the state onto the built-in SD card so that you can hibernate the microcomputer and pick up right back where you left off at a later date. Snazzy.

He’s also built a library which provides an emulation framework if you want to build on this work yourself. And did we mention he can play Space Invaders? Bravo [Steeeve]!

[Juan] sent us his writeup of a microcomputer he built using an Arduino UNO (AVR ATmega328p) and some off-board SRAM. This one’s truly minimalistic.

Have a look at the schematics (PDF). There’s an Arduino, the SPI SRAM, some transistors for TV video output, and a PS/2 connector for the keyboard. That’s it, really. It’s easily built on a breadboard in a few minutes if you have the parts on hand. Flash the Dan64 operating system and virtual machine into the AVR and you’re good to go.

Now we’ve seen a few 6502-based retro computers around here lately that use a 6502 paired with a microcontroller for the interfacing, but they’ve all been bulky three-chip affairs. [Juan] wins the minimalism prize by using a 6502 virtual machine implemented in the AVR to reduce the parts count down to two chips for the whole shooting match.

Using a 6502 virtual machine was a crucial choice in the design, because there are 6502 cross compilers that will let you compile and debug code for the microcomputer on your macrocomputer and then load it into the micro to run. This makes developing for the micro less painful.

How does it load programs you ask? The old-fashioned way of course, using audio files. Although rather than using the Kansas City Standard as in days of yore, he encodes the data in short and long pulses of square waves. This might be less reliable, but it sure saves on external hardware.

END_OF_DOCUMENT_TOKEN_TO_BE_REPLACED

Way back before the days of microcomputers, a few very lucky students first got their hands wet with microcomputer trainers. These simple devices used common logic chips, lights, and switches to perform calculations; basically, a very small and simple computer. [Jack] has just released his DUO Basic 8-bit educational computer, a computer designed entirely around logic chips just as was done in the olden days.

The entire computer except for a single EEPROM giving the computer 256 bytes of ROM, three registers, and two instructions (condition jmp and add). This allows for simple programs to be written just by flipping switches and hitting buttons – it doesn’t get much more ‘bare metal’ than that.

[Jack] has an online assembler and emulator for the DUO Basic along with a few example assembly programs. Of course, all the schematics and block diagrams are available on his site, along with a nice introductory video, shown below.