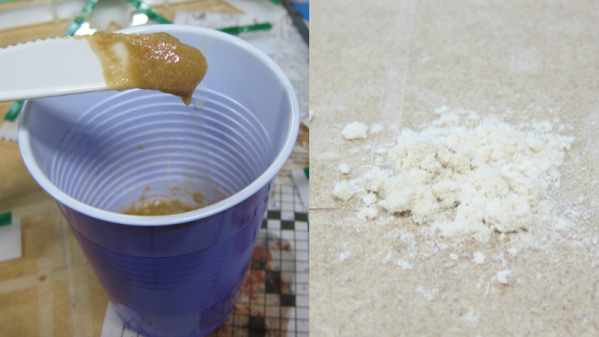 The world of glues is wide and varied, and it pays to use the right glue for the job. When [Eric] needed to stick a wide and flat 3D printed mount onto the back of a PCB that had been weatherproofed with an uneven epoxy coating, he needed a gap-filling adhesive that would bond to both surfaces. It seemed like a job for the hot glue gun, but the surface was a bit larger than [Eric] was comfortable using with hot glue for. The larger the surface to be glued, the harder it is to do the whole thing before hot glue cools too much to bond properly.

What [Eric] really wanted to use was a high quality two-part epoxy that he already had on hand, but the stuff was too runny to work properly for this application. His solution was to thicken it with a thixotropic filler, which yields a mixture that is akin to peanut butter: sticky, easily spread to where it’s needed, but otherwise stays in place without dripping or sagging and doesn’t affect bonding.

Common thixotropic fillers include ground silica or plastic fibers, but [Eric]’s choice was wood flour. Wood flour is really just very fine sawdust, and easily obtained from the bag on his orbital sander. Simply mix up a batch of thin two-part epoxy and stir in some wood flour until the sticky mixture holds its shape. Apply as needed, and allow it to cure.

Thanks to this, [Eric] was able to securely glue a 3D printed pad to the back of his animated LED snowflakes to help mount them in tricky spots. Whether for small projects or huge installations, LEDs, PCBs, and snowflakes are a good combination. 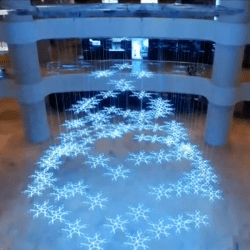 For the connections between the boards, he ended up using SIM card connectors intended for cell phones. Some testing led to choosing a connector that matched up well with the thickness of a 1.6mm PCB used as a spacer. About 28,000 of them were used, and for a while in 2015 it was very hard to get a hold of that particular part, because they had cleaned everyone out! END_OF_DOCUMENT_TOKEN_TO_BE_REPLACED

END_OF_DOCUMENT_TOKEN_TO_BE_REPLACED [Aki Korhonen] wanted to tighten up his macro photography setup. He already had the camera for the job, but wanted a fully adjustable target platform that he could easily light. What he came up with is a jig to hold the camera and fine tune the subject of each photo. It uses a frame with a piece of glass whose distance from the lens is adjusted by turning a knob. Below the glass a reflective surface redirects light from an LED flashlight up through the platform, lighting the snowflakes he’s shooting. A fixed LED source is in the plans for the next rendition.

Take a look at the overview of his setup in the quick clip after the break.

END_OF_DOCUMENT_TOKEN_TO_BE_REPLACED

[unusualelectronics] posted this animated LED snowflake. It has 61 LEDs, is controlled by a PIC microcontroller, and can perform about 30 different effects. The instructions are quite thorough, including diagrams for soldering and source code for the microcontroller.