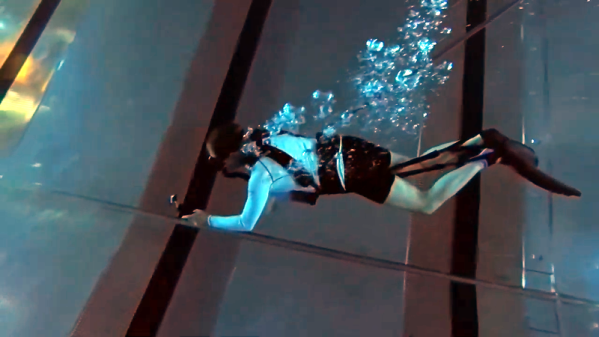 If you want to explore underwater, you have a few options. You can hold your breath. You can try to recycle your air. You can carry your breathing air with you as in SCUBA. You can stick a tube up like a snorkel, or you can have air sent down to you from the surface. EXOlung falls into this last category, but unlike many other surface solutions, it has a twist: it never runs out of power before you do. Watch the video below and you’ll see how it works.

A buoy puts a snorkel up out of the water, and a tube lets you dive up to 5 meters away. There’s a small tank on your chest, and your body’s motion serves to fill the tank from the outside air supply. As your legs extend and retract, you fill the tank and then put the tank’s air at ambient pressure so you can breathe. As a bonus, by varying how you inhale and exhale, you can control your buoyancy and, therefore, your depth.

The cost looks to be around 300 Euro, although for a bit more you can get one that uses different materials to withstand higher pressures. That one has a 7-meter hose.

Another approach is to just carry a little air and remove the CO2 from it and rebreathe it. We’ve also seen a risky surface air pump that uses wind power.

END_OF_DOCUMENT_TOKEN_TO_BE_REPLACED 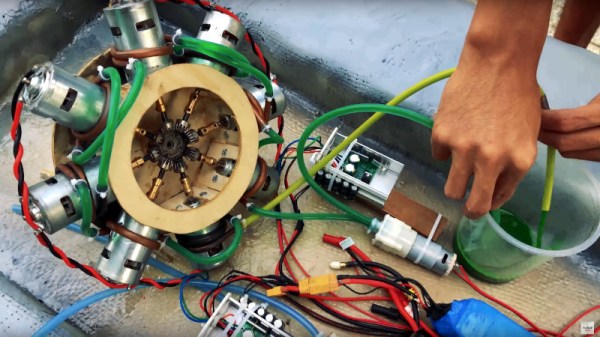 END_OF_DOCUMENT_TOKEN_TO_BE_REPLACED

Whether you’re new to electronics and programming, or you were bit-banging bare metal long before hair metal, CircuitPython is a great tool for getting a project up and working without all the fuss. The boards show up as mass storage devices, and programming consists of editing the Python file and saving it back to the board.

The only hard part about CircuitPython is trying to cram those official boards into small projects. [Kevin Neubauer] got tired of making his own board every time and came up with a slim system-on-module that has all the core functionality of CircuitPython. CircuitBrains Deluxe has regular holes for using headers, but also has castellated pads so he can solder these modules directly to a larger project PCB. [Kevin] says these are still in the testing and cost-optimization phase, but we would totally buy a few of them.

[Kevin] probably has a programming method for this module in mind already. But if you find yourself mystified by castellated pads, take a look at this pogo pin programmer built for ESP8266s. If your problem is pitch-related, maybe you can save the day with a breakout board.

Thanks to [Drew Fustini] for the tip! 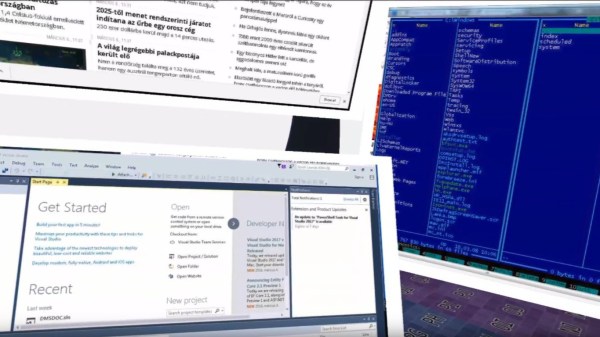 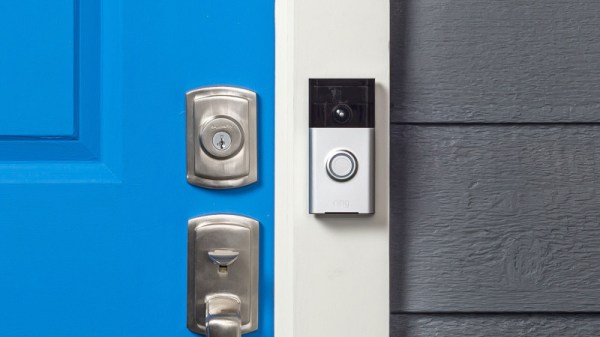 For a while now a series of stories have been circulating about Amazon’s Ring doorbell, an Internet-connected camera and entry system that lets users monitor and even interact with visitors and delivery people at their doors. The adverts feature improbable encounters with would-be crooks foiled by the IoT-equipped homeowner, but the stories reveal a much darker side. From reports of unhindered access by law enforcement to privately-held devices through mass releases of compromised Ring account details to attackers gaining access to children via compromised cameras, it’s fair to say that there’s much to be concerned about.

One cause for concern has been the location data exposed by the associated Amazon Neighbors crowd-sourced local crime paranoia app, and for those of us who don’t live and breathe information security there is an easy-to-understand Twitter breakdown of its vulnerabilities from [Elliot Alderson] that starts with the app itself and proceeds from there into compromising Ring accounts by finding their passwords. We find that supposedly anonymized information in the app sits atop an API response with full details, that there’s no defense against brute-forcing a Ring password, and that a tasty list of API and staging URLs is there for all to see embedded within the app. Given all that information, there’s little wonder that the system has proven to be so vulnerable.

As traditional appliance makers have struggled with bringing Internet connectivity into their products there have been a few stories of woeful security baked into millions of homes. A defense could be made that a company with roots outside the Internet can be forgiven for such a gaffe, but in the case of Amazon whose history has followed that of mass Web adoption and whose infrastructure lies behind so much of the services we trust, this level of lax security is unforgivable. Hackaday readers will be aware of the security issues behind so-called “smart” devices, but to the vast majority of customers they are simply technological wonders that are finally delivering a Jetsons-style future. If some good comes of these Ring stories it might be that those consumers finally begin to wake up to IoT security, and use their new-found knowledge to demand better. 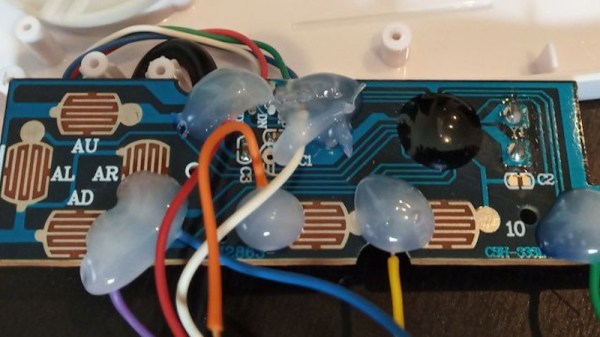 Though many of us will never have experimented with it, most readers should be familiar with DTMF as the tones used by the telephone system for dialling. If your youth was not misspent mashing 4-4-2-6-4-6-2, 4-4-2-6-4-1 into a keypad, then you haven’t lived!

As you might expect there are a variety of chipsets to handle DTMF, and one of them has been used by [ackerman] in a slightly unusual way. Many desktop computers do not have a convenient array of GPIOs upon which to hang a piece of hardware, but a constant among them is to support some form of gaming controller. Hence he’s taken a commodity joypad and interfaced a MT8870 DTMF decoder to its switch lines with a simple transistor buffer, and is able to pull the resulting information out in the host operating system. So far there are versions for Windows, DOS, Amstrad CPC, Arduino, and even PSX ( the original PlayStation console ).

One might ask why on earth you might want a DTMF input for your desktop PC, but to do so is to miss the point. We are surrounded by computing devices from our mobile phones upwards that do not have any form of interface that can easily be used by our electronic projects, and this serves as an example of how with a bit of ingenuity that can be overcome. It’s a subject we’ve touched upon before, when we asked why people aren’t hacking their cellphones. 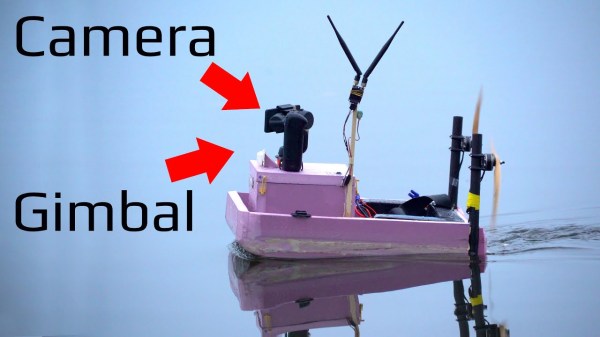 With the ever-increasing capabilities of smart phones, action cameras, and hand-held gimbals, the battle for the best shots is intensifying daily on platforms like YouTube and Instagram. Hyperlapse sequences are one of the popular weapons in the armoury, and [Daniel Riley] aka [rctestflight] realised that his autonomous boat could be an awesome hyperlapse platform.

This is the third version of his autonomous boat, with version 1 suffering from seaweed assaults and version 2 almost sleeping with the fishes. The new version is a flat bottomed craft was built almost completely from pink insulation foam, making it stable and unsinkable. It uses the same electronics and air boat propulsion as version 2, with addition of a GoPro mounted in smart phone gimbal to film the hyper lapses. It has a tendency to push the bow into the water at full throttle, due to the high mounted motors, but was corrected by adding a foam bulge beneath the bow, at the cost of some efficiency.

Getting the gimbal settings tuned to create hyperlapses without panning jumps turned out to be the most difficult part. On calm water the boat is stable enough to fool the IMU into believing that it’s is not turning, so the gimbal controller uses the motor encoders to keep position, which don’t allow it to absorb all the small heading corrections the boat is constantly making. Things improved after turning off the encoder integration, but it would still occasionally bump against the edges of the dead band inside which the gimbal does not turn with the boat. In the end [Daniel] settled for slowly panning the gimbal to the left, while plotting a path with carefully calculated left turns to keep the boat itself out of the shot. While not perfect, the sequences still beautifully captured the night time scenery of Lake Union, Seattle. Getting it to this level cost many hours of midnight testing, since [Daniel] was doing his best to avoid other boat traffic, and we believe it paid off.

We look forward to his next videos, including an update on his solar plane. END_OF_DOCUMENT_TOKEN_TO_BE_REPLACED