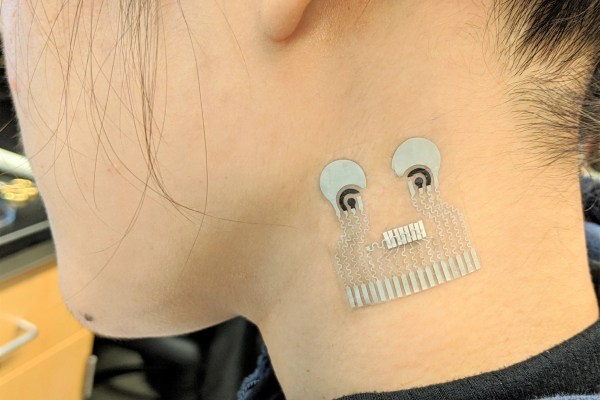 Does anyone actually enjoy the sensation of being squeezed by a blood pressure cuff? Well, as Mom used to say, it takes all kinds. For those who find the feeling nearly faint-inducing, take heart: researchers at UC San Diego have created a non-invasive medical wearable with a suite of sensors that can measure blood pressure and monitor multiple biochemicals at the same time.

The device is a small, flexible patch that adheres to the skin. So how does it manage to measure blood pressure without causing discomfort? The blood pressure sensor consists of eight customized piezoelectric transducers that bounce ultrasonic waves off the near and far walls of the artery. Then the sensor calculates the time of flight of the resulting echoes to gauge arterial dilation and contraction, which amounts to a blood pressure reading.

This patch also has a chemical sensor that uses a drug called pilocarpine to induce the skin to sweat, and then measures the levels of lactate, caffeine, and alcohol found within. To monitor glucose levels, a mild current stimulates the release of interstitial fluid — the stuff surrounding our cells that’s rife with glucose, salt, fatty acids, and a few minerals. This is how continuous glucose monitoring for diabetes patients works today. You can check out the team’s research paper for more details on the patch and its sensors.

In the future, the engineers are hoping to add even more sensors and develop a wireless version that doesn’t require external power. Either way, it looks much more comfortable and convenient than current methods. 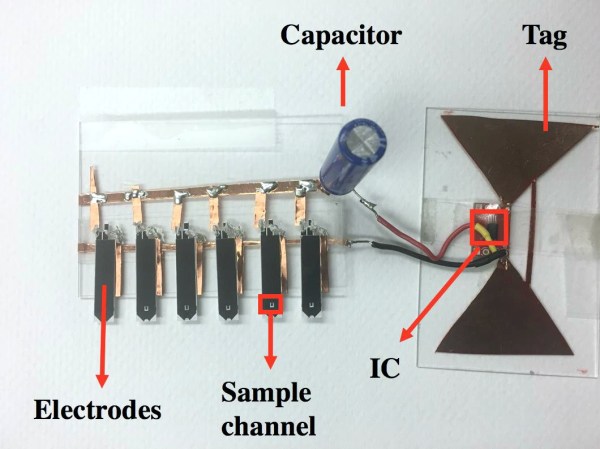 RFID is a workhorse in industrial, commercial, and consumer markets. Passive tags, like work badges and key fobs, need a base station but not the tags. Sensors are a big market and putting sensors in places that are hard to reach, hostile, or mobile is a costly proposition. That price could drop, and the sensors could be more approachable with help from MIT’s Auto-ID Lab who are experimenting with sensor feedback to RFID devices. 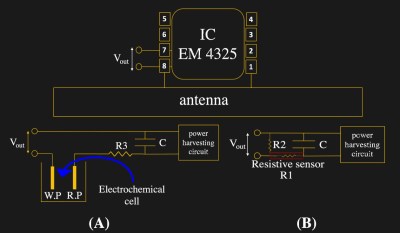 Let’s pretend you want to measure the temperature inside a vat of pressurized acid. You’d rather not drill a hole in it to insert a thermometer, but a temperature sensor sealed in Pyrex that wirelessly transmits the data and never runs out of power is a permanent and cheap solution. The researchers have their sights set on glucose sensing and that news come shortly after Alphabet gave up their RFID quest to measure glucose through contact lenses. Shown the top of this article is a prototype for a Battery Assisted Passive (BAP) RFID sensor that uses commodity glucose testing strips, sending data when the electrochemical reaction occurs. It uses six of these cells in parallel to achieve a high enough peak current to trigger the transmission. But the paper (10.1109/RFID.2018.8376201 behind paywall) mentions a few strategies to improve upon this. However, it does prove the concept that the current spike from the test strips determines the time the tag is active and that can be correlated to the blood glucose detected.

How many of our own projects would instantly upgrade with the addition of a few sensors that were previously unobtainable on a hacker budget? Would beer be brewed more effectively with more monitoring? How many wearables would be feasible with battery-free attachments? The sky is the figurative limit.

Thank you, [QES] for the tip [via TechXplore] 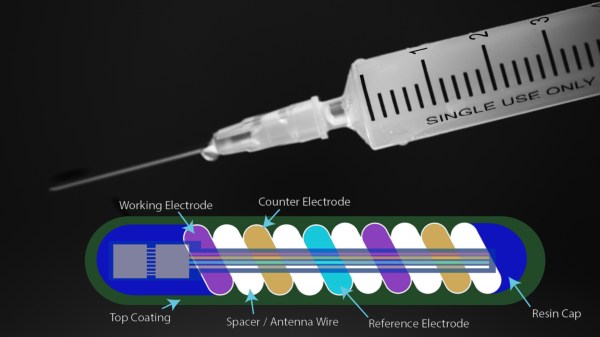 People with diabetes have to monitor their blood regularly, and this should not be a shock to anyone, but unless you are in the trenches you may not have an appreciation for exactly what that entails and how awful it can be. To give a quick idea, some diabetics risk entering a coma or shock because drawing blood is painful or impractical at the moment. The holy grail of current research is to create a continuous monitor which doesn’t break the skin and can be used at home. Unaided monitoring is also needed to control automatic insulin pumps.

Alphabet, the parent company of Google, gave up where Noviosense, a Netherlands company owned by [Dr. Christopher Wilson], may gain some footing. Instead of contact lenses which can alter the flow of fluids across the eye, Noviosense places their sensor below the lower eyelid. Fluids here flow regardless of emotion or pain, so the readings correspond to the current glucose level. Traditionally, glucose levels are taken through blood or interstitial fluid, aka tissue fluid. Blood readings are the most accurate but the interstitial fluid is solid enough to gauge the need for insulin injection, and the initial trial under the eyelid showed readings on par with the interstitial measurements.

Hackers are not taking diabetes lying down, some are developing their own insulin and others are building an electronic pancreas. 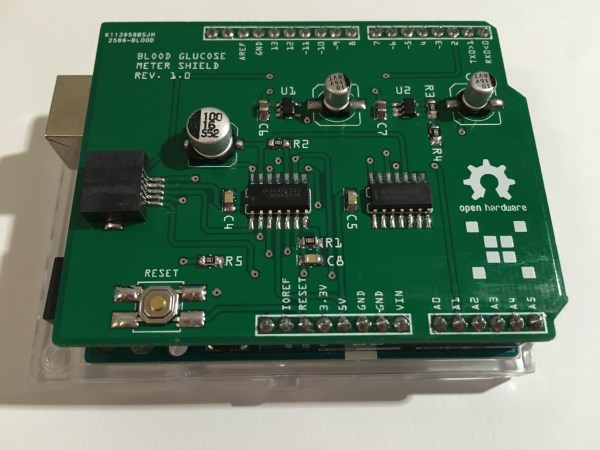 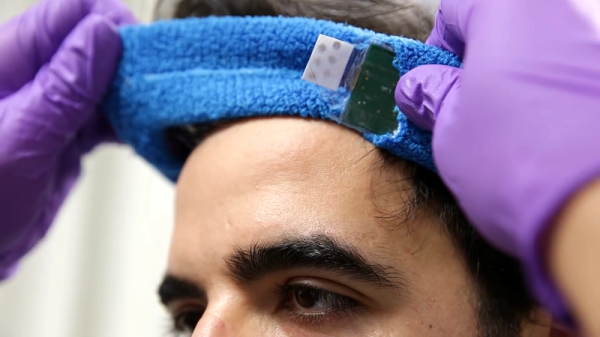 END_OF_DOCUMENT_TOKEN_TO_BE_REPLACED

Diabetes affects almost 400 million people worldwide, and complications due to diabetes – blindness, cardiovascular disease, and kidney problems – can be reduced by regular monitoring of blood glucose. The usual way of measuring blood glucose is with a pin prick of blood and a small test strip that costs about $0.30. That’s a lot of test strips and blood used by 400 million diabetics every day. Wouldn’t it be better if there was a less invasive way of measuring blood glucose?

[marcelclaro]’s project for The Hackaday Prize aims to do just that. Instead of measuring blood directly, his project will measure blood glucose by shining light through a finger or an earlobe. Using light to detect blood glucose is something that has been studied in the lab, but so far, there aren’t any products on the market that use this technique.

There are two major problems [marcel] needs to overcome to turn this project into reality. The first is simply raw data for calibration. For [marcel], this is easy; he has Type 1 diabetes, and takes four glucose measurements a day. Patient heal thyself, or something.

The second problem is getting a photosensor that’s sensitive enough. By using an InGaAs PIN diode, a current-controlled oscillator, and a digital counter, [marcel] should have a sensor that’s good enough, with electronics that are cheap enough, to create some tech that is truly game changing for a few hundred million people around the world.