Hose clamps have been around as long as we’ve been using flexible hoses. Usually, a clamp consists of a slotted metal strap, and a screw for tightening. Most of us know how quickly they slip when you want to add a bit more torque, or the frustration of not having the right size. Fortunately [Max Egorov] reminded us of DIY wire clamps (video after the break), an excellent alternative that is very effective, covers an infinite size range and is easy to make with a simple tool.

The wire clamp is in effect a doubled girth hitch, that is pulled tight with the ends bent over to keep the tension. [Max] shows you how to easily make your own clamper tool with basic tools and a few bits of steel. Making it as ornate as his one is definitely not required.  You can also buy a commercial tool that is sold under the name ClampTite, which uses a leadscrew type design.

To achieve a tight seal with a hose clamp, the main requirement is constant pressure around its entire circumference. These wire clamps do this very well and are popular among aircraft mechanics, since flying in a plane with a leaky coolant or fuel hose could shorten your lifespan a bit. [Max] also demonstrates a variety of other uses for these including fixing tool handles and even building a ladder.

We love simple but effective tools like this, and we’ll definitely be adding one to our toolbox. Have you used these before? Let us know in the comments!

There is (almost) never such a thing as too many tools, and making your own is very satisfying. We’ve seen people build an outfit a complete carpentry workshop using plywood, and build sheet metal press brake with no welding.

Thanks [Keith O] for the tip!

END_OF_DOCUMENT_TOKEN_TO_BE_REPLACED

The world of DIY circuits for STEM and wearables has a few options for conductors. Wire with Dupont connectors is a standard, as is adhesive copper tape. There’s also conductive nylon/steel thread or ribbon. Which you choose depends on your application, of course, but as a general rule wire is cheap and ubiquitous while making connections is more challenging; copper tape is cheap and simple to use, but delicate and rips easily, so is best used for flat surfaces that won’t see a lot of stress or temporary applications; and conductive nylon thread or tape is better for weaving into fabrics.

The Brown Dog Gadgets team wanted to respond to a frequent question they are asked, what are the current limits for their Maker Tape (nylon/steel ribbon), so they ran some experiments to find out. In the name of Science you’ll see some flames in the video below, but only under extreme conditions.
END_OF_DOCUMENT_TOKEN_TO_BE_REPLACED 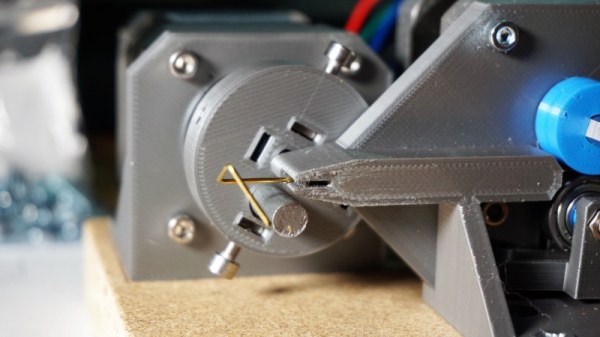 It doesn’t seem as though bending wire would be much of a chore, but when you’re making art from your circuits, it can be everything. Just the right angle in just the right place can make the difference between a circuit sculpture that draws gasps and one that’s only “Meh.”

[Jiří Praus] creates circuit sculptures that are about as far away from the “Meh” end of the spectrum as possible. And to help him make them even more spectacular, he has started prototyping a wire-bending machine to add precision to his bends. There’s no build log at the moment, but the video below shows progress to date. All the parts are 3D-printed, with two NEMA 17 steppers taking care of both wire feed and moving the bending head. It appears that the head has multiple slots for tools of different shapes. For now, the wire is rotated around its long axis manually, but another stepper could be added to take care of that job.

[Jiří] tells us that while he loves making circuit sculptures like his amazing mechanical tulip, he hates repeating himself. He hopes this bender will make repeat jobs a little less tedious and a lot more precise, and we hope he goes forward with the build so we get to see both it and more of his wonderful works of circuit art.

END_OF_DOCUMENT_TOKEN_TO_BE_REPLACED 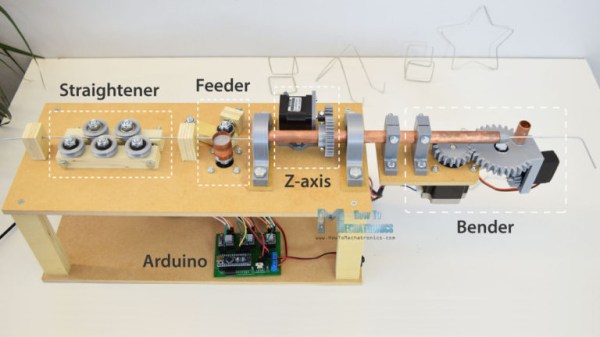 It’s been a while since we’ve shown a DIY wire bending machine, and [How To Mechatronics] has come up with an elegant design with easy construction through the use of 3D-printed parts which handle most of the inherent complexity. This one also has a Z-axis so that you can produce 3D wire shapes. And as with all wire bending machines, it’s fun to watch it in action, which you can do in the video below along with seeing the step-by-step construction.

One nice feature is that he’s included a limit switch for automatically positioning the Z-axis when you first turn it on. It also uses a single 12 volt supply for all the motors, and the Arduino that acts as the brains. The 5 volts for the one servo motor is converted from 12 using an LM7805 voltage regulator. He’s also done a nice job packaging the Arduino, stepper motor driver boards, and the discrete components all onto a single custom surface mount PCB.

The bender isn’t without some issues though, such as that there’s no automatic method for giving it bending instructions. You can write code for the steps into an Arduino sketch, which is really just a lot of copy and paste, and he’s also provided a manual mode. In manual mode, you give it simple commands from a serial terminal. However, it would be only one step more to get those same commands from a file, or perhaps even convert from G-code or some other format.

Another issue is that the wire straightener puts too much tension on the wire, preventing the feeder from being able to pull the wire along. One solution is to feed it pre-straightened wire, not too much to ask for since it’s really the bending we’re after. But fixing this problem outright could be as simple as changing two parts. For the feeder, the wire is pulled between copper pipe and a flat steel bearing, and we can’t help wondering whether perhaps replacing them with a knurled cylinder and a grooved one would work as the people at [PENSA] did with their DIWire which we wrote about back in 2012. Sadly, the blog entries we linked to no longer work but a search shows that their instructable is still up if you want to check out their feeder parts.

As for the applications, we can think of sculpting, fractal antennas, tracks for marble machines, and really anything which could use a wireframe for its structure. Ideas anyone?

END_OF_DOCUMENT_TOKEN_TO_BE_REPLACED

Here’s a quick build to show off fundamentals of electric current to new makers — or a cool party trick that might earn you a buck. [Jay] from the [Plasma Channel] shows off how you can make a simple motor with only three pieces of enameled wire in under five minutes.

Start with a roll of 26-guage — or thicker — magnet wire, and a pair of scissors or knife. For the base, wrap fifteen to twenty turns of wire around any spherical object about one and a half inches in diameter, leaving a few inches extra on both ends. Wrap those ends around your coil a few tines to secure it and straighten out the excess length — one will act as a support and the other will connect to your power source. Another piece of wire — similarly wrapped around the base coil — acts as the other support and the other terminal. Scrape off the wire coating from one side on both support wires and curl them into small loops. Halfway done!

END_OF_DOCUMENT_TOKEN_TO_BE_REPLACED 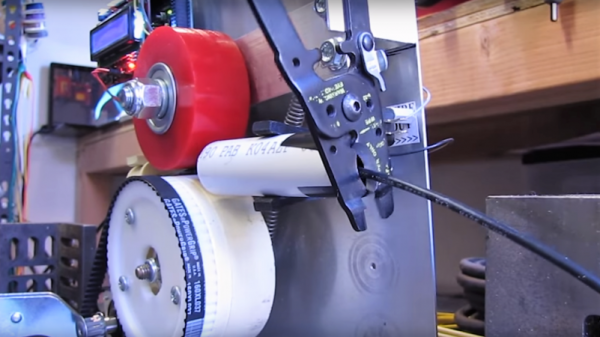 We’ve all been there: faced with a tedious job that could be knocked out manually with a modest investment of time, we choose instead to overcomplicate the task and build something to do it for us. Such was the impetus behind this automated wire cutter, but in this case the ends justify the means.

That [Edward Carlson] managed to stretch a twenty-minute session with wire cutters and a tape measure into four days of building and tweaking this machine is pretty impressive. The build process was jump-started by modifying an off-the-shelf wire measuring machine, of the kind one finds in the electrical aisle of The Big Orange Store. Stripped of the original mechanical totalizer and with a stepper added to drive the friction wheels, the machine can now measure cable by counting steps. A high-torque servo drives a stout pair of cable shears through a nifty linkage, or the machine can just measure the length of cable without cutting. [Edward]’s solution in search of a problem ends up bringing extra value, so maybe the time spent was worth it after all.

If the overall design looks familiar, you may be thinking of a similar of another cable-cutting bot we featured a while back. That one used a filament extruder and was for lighter gauge wires than this machine. END_OF_DOCUMENT_TOKEN_TO_BE_REPLACED