The Raspberry Pi has only been available for a few days, but already those boards are heading through the post office and onto workbenches around the world. From the initial impressions, we already know this quad-core ARMv7 system boots in about half the time, but other than that, there aren’t many real benchmarks that compare the new Raspberry Pi 2 to the older Raspi 1 or other similar tiny Linux dev boards. This is the post that fixes that.

A word of warning, though: these are benchmarks, and benchmarks aren’t real-world use cases. However, we can glean a little bit of information about the true performance of the Raspberry Pi 2 with a few simple tools.

For these tests, I’ve used Roy Longbottom’s Raspberry Pi benchmarking tools, nbench, and a few custom tools to determine how fast both hardware versions of the Raspberry are in real-world use cases.

END_OF_DOCUMENT_TOKEN_TO_BE_REPLACED 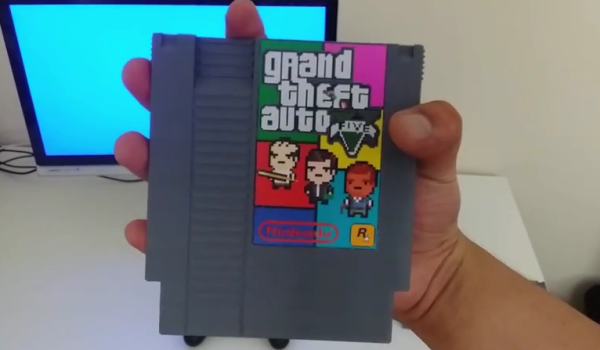 [Frank] came up with a clever way to extend the storage of his PS4. He’s managed to store his digital PS4 games inside of storage devices in the shape of classic NES cartridges. It’s a relatively simple hack on the technical side of things, but the result is a fun and interesting way to store your digital games.

He started out by designing his own 3D model of the NES cartridge. He then printed the cartridge on his Ultimaker 3D printer. The final print is a very good quality replica of the old style cartridge. The trick of this build is that each cartridge actually contains a 2.5″ hard drive. [Frank] can store each game on a separate drive, placing each one in a separate cartridge. He then prints his own 80’s style labels for these current generation games. You would have a hard time noticing that these games are not classic NES games at first glance.

Storing the game in cartridge form is one thing, but reading them into the PS4 is another. The trick is to use a SATA connector attached to the PS4’s motherboard. [Frank’s] project page makes it sound like he was able to plug the SATA cable in without opening the PS4, by attaching the connector to a Popsicle stick and then using that to reach in and plug the connector in place. The other end of the SATA cable goes into a custom 3D printed housing that fits the fake NES cartridges. This housing is attached to the side of the PS4 using machine screws.

Now [Frank] can just slide the cartridge of his choice into the slot and the PS4 instantly reads it. In an age where we try to cram more and more bits into smaller and smaller places, this may not be the most practical build. But sometimes hacking isn’t about being practical. Sometimes it’s simply about having fun. This project is a perfect example. END_OF_DOCUMENT_TOKEN_TO_BE_REPLACED

To anyone, this should not be news. For the last decade, the public perception of Radio Shack was one of a shell of its former self. In 2007, The Onion famously published Even CEO Can’t Figure Out How RadioShack Still In Business, an article that like most of The Onion’s work, is a sand dune of grains of truth.

In recent years, Radio Shack has made attempts to appeal to the demographic that holds the ‘shack in such high regard. Just four short years ago, Radio Shack made an appeal to this community and asked for suggestions for what people would actually buy at Radio Shack. The answers ranged from Arduinos and larger component selections to Parallax Propellers. Even with this renewed focus on DIY, repair, electronic tinkering, and even in-house cellphone repair shops in some select locations, this was not enough.

This was a make or break year for Radio Shack. Last fall, Standard General, a hedge fund with an amazing name, attempted to refinance Radio Shack’s debt with specific revenue benchmarks set for the holiday season. These benchmarks were not met, and now Radio Shack has filed for bankruptcy protection after reaching a deal to sell nearly 2,500 stores. Radio Shack now has about 5,000 stores in the U.S.. Half of them will close, and as many as 1,700 will be operated by Sprint. The future of Radio Shack was a cell phone store, it seems.

Right now, there are rumors of Radio Shack employees ‘released from service’, with mass closings of stores very, very soon.

There has always been a love-hate relationship with Radio Shack with the DIY and tinkerer community. It was everything from many programmer’s first introduction to computers, the only place in town you could buy [Forrest Mims]’ excellent books, to a horrible place to work, and an odd store where you need a phone number to buy batteries.

This is not a eulogy; Radio Shack isn’t quite dead just yet, and eulogies are reserved for the loved ones in our lives. Radio Shack is neither. We all have a rich history with Radio Shack, and next time you’re buying some resistors on Mouser or Digikey, just remember we’re living in a different world now. 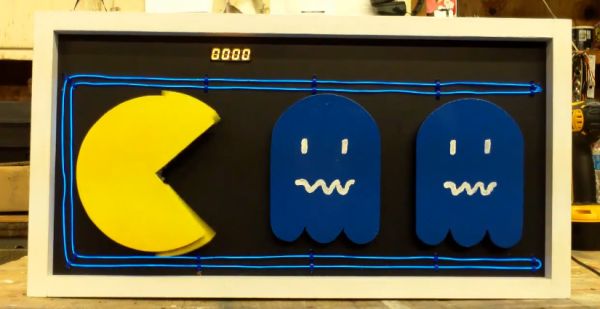 [Bob] mentions that he can’t have the EL wire and the servo running at the same time. If he tries this, the Teensy ends up “running haywire” after a few minutes. He’s looking for suggestions, so if you have one be sure to leave a comment. END_OF_DOCUMENT_TOKEN_TO_BE_REPLACED 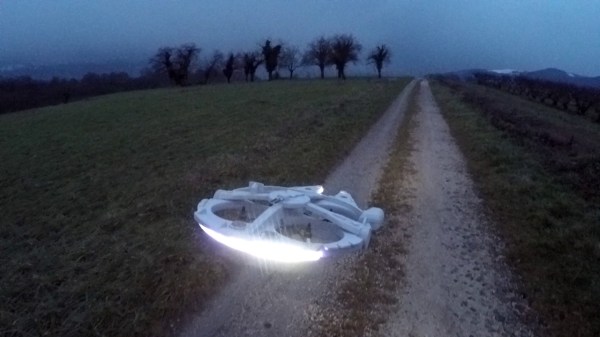 If you own a quadcopter chances are you own more than one. It’s kind of an addictive thing in that way. So dig out that dinged up model and build something awesome around it. We’d suggest making it look exactly like a Millenium Falcon. Okay, to be fair this is built around a custom quadcopter originally designed to carry a camera and GPS but removed for this project. We’re not sure if stock models have enough extra umph to lift a fancy fuselage like this (maybe you’ll weigh in on that in the comments?).

As with any great build this started with a scale drawing. The drawing was printed for use as a cutting template for the expanded polystyrene. Part of what makes it look so fantastic is that the fuselage isn’t 2-dimensional. There is depth in the places that matter and that’s all because of near-mythical foam cutting/shaping skills on [Olivier’s] part.

Final touches are LEDs on front and to simulate the curved engine on the tail. You can almost see this thing picking up a handless [Luke] below Bespin’s floating city. This Falcon flies like… a quadcopter (what did you expect? The Kessel Run in 12 parsecs?), which you can see in the videos after the break. The second clip shows how easy it is to remove the foam body from the quad frame, yet another nice touch!

Of course if Star Wars isn’t your thing you can give trolling the skies as a flying body a shot.

END_OF_DOCUMENT_TOKEN_TO_BE_REPLACED 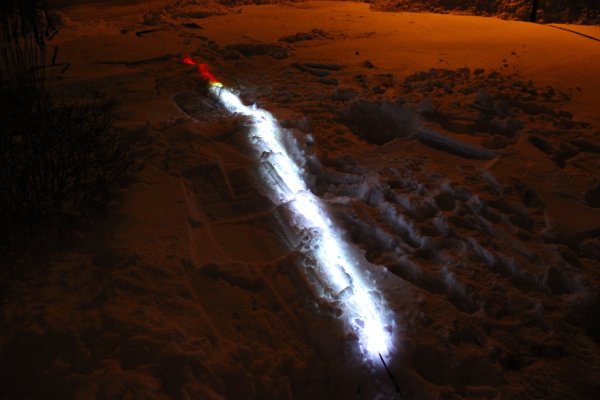 [Hunter] wanted to do something a bit more interesting for his holiday lights display last year. Rather than just animated lights, he wanted something that was driven by data. In this case, his display was based on the mood of people in his city. We’ve seen a very similar project in the past, but this one has a few notable differences.

The display runs off of an Arduino. [Hunter] is using an Ethernet shield to connect the Arduino to the Internet. It then monitors all of the latest tweets from users within a 15 mile radius of his area. The tweets are then forwarded to the Alchemy Sentiment API for analysis. The API uses various algorithms and detection methods to identify the overall sentiment within a body of text. [Hunter] is using it to determine the general mood indicated by the text of a given tweet.

Next [Hunter] needed a way to somehow display this information. He opted to use an LED strip. Since the range of sentiments is rather small, [Hunter] didn’t want to display the overall average sentiment. This value doesn’t change much over short periods of time, so it’s not very interesting to see. Instead, he plots the change made since the last sample. This results in a more obvious change to the LED display.

Another interesting thing to note about this project is that [Hunter] is using the snow in his yard to diffuse the light from the LEDs. He’s actually buried the strip under a layer of snow. This has the result of hiding the electronics, but blurring the light enough so you can’t see the individual LEDs. The effect is rather nice, and it’s something different to add to your holiday lights display. Be sure to check out the video below for a demonstration. END_OF_DOCUMENT_TOKEN_TO_BE_REPLACED 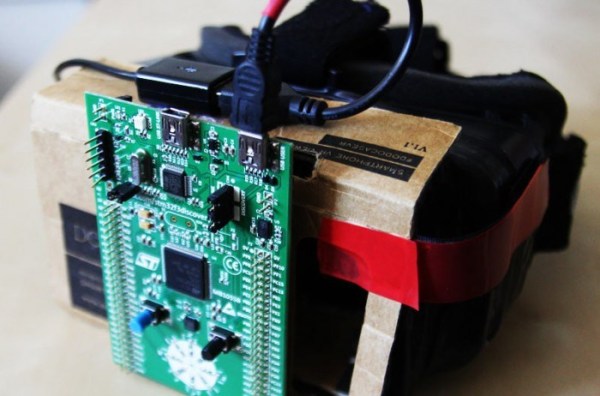