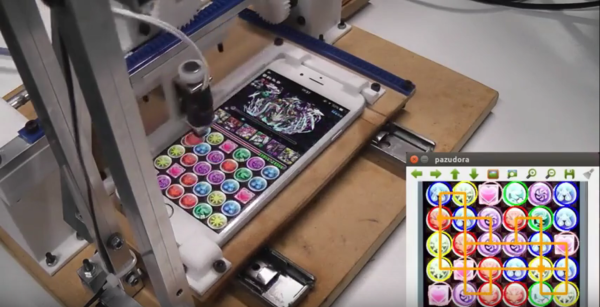 Have you heard of the iPhone game Puzzle & Dragons? We understand it’s big in Japan. The puzzle part is all about rearranging colored orbs and grouping them together so they disappear and give you points. It’s also part RPG—each color is linked to a little guy, and every combo makes the matching-colored guy a little stronger. Then you fight monsters and take loot.

A YouTube user named [Junya Sakamoto] built a robot to play the game for him. It analyzes the board to come up with the best possible series of moves and then executes them using a Raspberry Pi. You can see what the robot is planning on the screen of a connected laptop. A couple of motors controlled with a Gertbot move a stylus up and down the screen and the phone itself back and forth.

We like game-playing robots quite a bit around here. Here’s a Legoduino robot that plays Jurassic Park Builder. This other robot was built to test apps, but it plays Angry Birds in its spare time.

END_OF_DOCUMENT_TOKEN_TO_BE_REPLACED

[Lee] continues with his exploration of the U8Plus (a cheap smartwatch). He hasn’t got it all cracked, yet, but he did manage to get a dump of the device’s ROM using an unusual method. At first, [Lee] thought that the JTAG interface (or, at least, the pins presumed to be the JTAG interface) would be a good way to explore the device. However, none of the people experimenting with the device have managed to get it to work.

Instead, [Lee] went through the serial bootloader and dumped the flash memory. He found out, though, that the bootloader refused to read the ROM area. It would, however, load and run a program. Unfortunately, no one has found how to access the UART device directly, but they have found how to drive the vibration motor.

[Lee] took off the vibration motor and used it as an output port for a simple program to dump the ROM. An Arduino picked up the data at a low baud rate and produced an output file. This should allow more understanding of how to drive the watch hardware.

We covered the initial teardown of this watch earlier this year. Of course, if you don’t want to reverse engineer a smartwatch, you could always build your own. 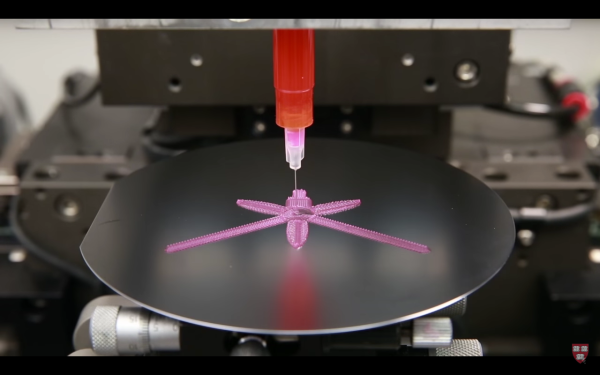 END_OF_DOCUMENT_TOKEN_TO_BE_REPLACED

Contributors are hired as private contractors and paid for each post. You should have the technical expertise to understand the projects you write about, and a passion for the wide range of topics we feature. If you’re interested, please email our jobs line, and include: 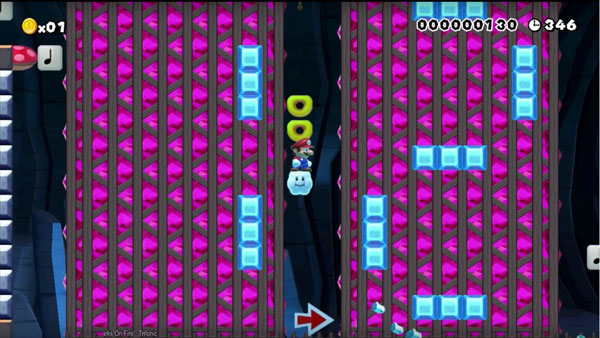 Most people use the Super Mario Maker to, well, create Super Mario game levels. [Robin T] decided to try something a little different: building a working calculator. Several hundred hours later, he created the Cluttered Chaos Calculator, which definitely lives up to the name. What this Super Mario level contains is a 3-bit digital computer which can add two numbers between 0 and 7, all built from the various parts that the game offers. To use it, the player enters two numbers by jumping up in a grid, then they sit back and enjoy the ride as Mario is carried through the process, until it finally spits out the answer in a segment display.

It’s not going to be winning any supercomputer prizes, as it takes about two minutes to add the two digits. But it is still an incredibly impressive build, and shows what a dedicated hacker can do with a few simple tools and a spiny shell or two.

END_OF_DOCUMENT_TOKEN_TO_BE_REPLACED

Just over a year ago, Particle (formerly Spark), makers of the very popular Core and Particle Photon WiFi development kits, released the first juicy tidbits for a very interesting piece of hardware. It was the Electron, a cheap, all-in-one cellular development kit with an even more interesting data plan. Particle would offer their own cellular service, allowing their tiny board to send or receive 1 Megabyte for $3.00 a month, without any contracts.

Thousands of people found this an interesting proposition and the Electron crowdfunding campaign took off like a rocket. Now, after a year of development and manufacturing, these tiny cellular boards are finally shipping out to backers and today the Electron officially launches.

Particle was kind enough to provide Hackaday with an Electron kit for a review. The short version of this review is the Electron is a great development platform, but Particle pulled off a small revolution in cellular communications and the Internet of Things

END_OF_DOCUMENT_TOKEN_TO_BE_REPLACED

Whilst designing hardware, it’s easy to shut the doors, close the blinds, and bury ourselves deeply into an after-hours design session. Although it’s tempting to fly solo, it’s likely that we’ll encounter bugs that others have handled, or perhaps we’ll realize that we forgot to add a handy feature that someone else could’ve noticed before we sent the darned PCB files out for fab. All that said, if we probe the community around us and ask for feedback, we can produce a project that’s far more functional and feature-complete in less time than if we were to design solo. Who knows? With enough eyes giving feedback on your project, maybe others will get excited enough to want one for themselves! [Andrew Werby] and [Zak Timan] on the FormLabs forums did just that: through months of iterative design and discussion on the FormLabs forums, they’ve created the first 3rd party glass resin tank that’s altogether sturdier, longer-lasting, more scratch-resistant, and less distorting than the original resin tank. And guess what? After months of trials through a few brave customers, you too can be the proud owner such a tank as they’re now up for sale on [Zak’s] website.
END_OF_DOCUMENT_TOKEN_TO_BE_REPLACED