Connecting a headless Raspberry Pi to a wireless network can be quite a paradoxical situation. To connect it to the network, you need to open an SSH connection to configure the wireless port. But to do so, you need a network connection in the first place. Of course, you can still get command-line access using a USB-to-UART adapter or the Pi’s ethernet port – if present – but [Arsenijs] worked out a much more convenient solution for his Hackaday Prize entry: The pyLCI Linux Control Interface.

His solution is a software framework written in Python that uses a character display and buttons to make a simple hardware interface. This allows you to configure all important aspects of a Raspberry Pi – or any other Linux SBC – from a tidily organized click-and-scroll menu. [Arsenijs] implemented a whole bunch of useful tools: There’s a network tool to scan and connect to WiFi networks. A systemctl tool that lets you manage the services running on the system, which is especially helpful when you need to restart a stuck service. A partition tool helps with viewing and unmounting mass storage devices. He’s even planning to add a filesystem browser.

With his Open Source project, [Arsenjs] aims to shorten the development time for embedded projects by taking out the efforts of implementing the basic interface functions from scratch. Indeed, there are countless scenarios, where a basic display interface can be of great value. Given the great project documentation and the fact that this can work with virtually any Arduino or Raspberry Pi LCD-pushbutton-hat or shield, we’re sure this is going to be used a lot. Enjoy the video!

END_OF_DOCUMENT_TOKEN_TO_BE_REPLACED 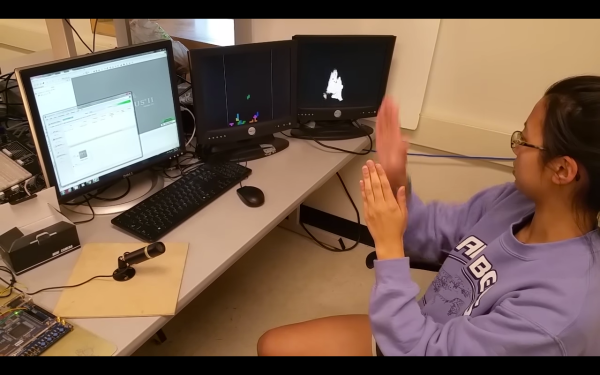 There are reports of a Tetris movie with a sizable budget, and with it come a plentiful amount of questions about how that would work. Who would the characters be? What kind of lines would there be to clear? Whatever the answers, we can all still play the classic game in the meantime. And, thanks to some of the engineering students at Cornell, we could play it without using a controller.

This hack comes from [Bruce Land]’s FPGA design course. The group’s game uses a video camera which outputs a standard NTSC signal and also does some filtering to detect the user. From there, the user can move their hands to different regions of the screen, which controls the movement of the Tetris pieces. This information is sent across GPIO to another FPGA which uses that to then play the game.

This game is done entirely in hardware, making it rather unique. All game dynamics including block generation, movement, and boundary conditions are set in hardware and all of the skin recognition is done in hardware as well. Be sure to check out the video of the students playing the game, and if you’re really into hand gesture-driven fun, you aren’t just limited to Tetris, you can also drive a car.

END_OF_DOCUMENT_TOKEN_TO_BE_REPLACED

[Matikas] apparently forgets to lock the screen on his computer when he gets up to grab a coffee. And he apparently works with a bunch of sharks: “If you don’t [lock it], one of your colleagues will send email to the whole company that you invite them to get some beer (on your bill, of course).” Not saying we haven’t done similar, mind you. Anyway, forgetting to lock your screen in an office environment is serious business.

So [Matikas] built a great system that remotely types the keystrokes to lock his screen, or unlock it with his password. An off-the-shelf 433 MHz keyfob is connected to an Arduino micro that simulates a keyboard attached to his computer. It’s a simple system, but it’s a great effect. (See the video demo, below.)

END_OF_DOCUMENT_TOKEN_TO_BE_REPLACED

If you can’t tell, we’re on a roll with 3D printers and printed projects this month. So far, we’ve covered printers, and simple functional 3D prints. This week we’re taking a look at some of the awesome complex 3D printed projects on Hackaday.io. 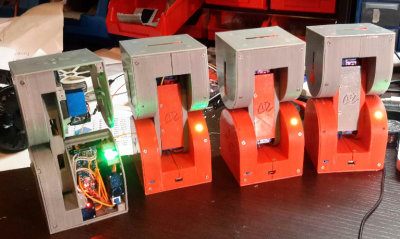 We start with [Alberto] and Dtto v1.0 Modular Robot. Dtto is [Alberto’s] entry in the 2016 Hackaday Prize. Inspired by Bruce Lee’s famous water quote, Dtto is a modular snake-like robot. Each section of Dtto is a double hinged joint. When two sections come together, magnets help them align. A servo controlled latch solidly docks the sections, which then work in unison. Dtto can connect and separate segments autonomously – no human required. [Alberto] sees applications for a robot like [Dtto] in search and rescue and space operations. END_OF_DOCUMENT_TOKEN_TO_BE_REPLACED

[Christian] wrote and sells some CAM/CNC controller software. We’re kinda sticklers for open source, and this software doesn’t seem to be, so “meh”. But what we do like is the Easter egg that comes included: the paths to mill out the base for a clock, and then the codes to move steel ball-bearings around to display the time.

Of course we’d like to see more info (more, MORE, MOAR!) but it looks easy enough to recreate. We could see redesigning this with marbles and a vacuum system, for instance. The seats for the ball bearings don’t even need to be milled out spheres. You could do this part with a drill press. Who’s going to rebuild this for their 3D printer? You just have to make sure that the machine is fast enough to move the balls around within one minute.

END_OF_DOCUMENT_TOKEN_TO_BE_REPLACED

If you have owned Android phones, there’s a reasonable chance that as the kind of person who reads Hackaday you will at some time have rooted one of them, and even applied a new community ROM to it. When you booted the phone into its new environment it’s not impossible you would have been surprised to find your phone now sported an FM radio. How had the ROM seemingly delivered a hardware upgrade?

It’s something your cellphone carrier would probably prefer not to talk about, a significant number of phones have the required hardware to receive FM radio, but lack the software to enable it. The carriers would prefer you to pay for their data to stream your entertainment rather than listen to it for free through a broadcaster. If you are someone capable of upgrading a ROM you can fix that, but every other phone owner is left holding a device they own, but seemingly don’t own.

Across North America there is a group campaigning to do something about this situation. Free Radio On My Phone and their Canadian sister organization are lobbying the phone companies and manufacturers to make the FM radio available, and in the USA at least they have scored some successes.

We have covered numerous attempts to use the DMCA to restrict people’s access to the hardware they own, but this story is a little different. There is no question of intellectual property being involved here, it is simply that the carriers would rather their customers didn’t even know that they had bought an FM radio along with their phone. If this bothers you, thanks to Free Radio On My Phone you can now join with others and find a voice on the matter.

It’s interesting to note that many FM radio chips also support a wider bandwidth than the North American and European 88 to 108MHz or thereabouts. In parts of Asia the broadcast band extends significantly lower than this, and the chipset manufacturers make products to support these frequencies. This opens up the interesting possibility that given a suitable app a cellphone could be used to receive other services on these frequencies. Probably more of a bonus for European radio amateurs with their 70MHz allocation than for North American residents.