Metal fabrication is a useful skill to have. There’s plenty you can achieve in your workshop at home, given the right tools. There’s lathes for turning, mills for milling, and bandsaws and dropsaws for chopping it all to pieces. But what do you do if you need to make hoops and bends and round sections? You build a metal roller, of course – and that’s precisely what [James Bruton] did.

The main body of the tool is built out of box section, chosen largely as it’s what [James] had lying around. Bearings are of the familiar pillow block variety, with 20 mm bright steel serving as the rollers due to its better tolerance than mild steel stock. Set screws hold the shafts in place to avoid everything sliding around the place. A 10-ton bottle jack then provides the force to gently bend the workpiece as it passes through the rollers.

Initial tests were positive, with the roller producing smooth curves in 4 mm thick steel bar. There were some issues with runout, which were easily fixed with some attention to the parallelism of the shafts. It’s a tidy build, and can serve as a basis for further upgrades in future if necessary.

We’ve seen DIY roll benders before, too. Video after the break.

END_OF_DOCUMENT_TOKEN_TO_BE_REPLACED 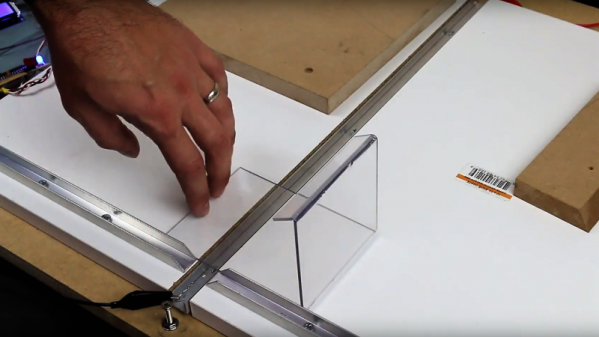 Look around your bench and chances are pretty good that there’s a PCB or scrap of perfboard or even a breadboard sitting there, wires and LEDs sprouting off it, doing something useful and interesting. Taking it to the next level with a snazzy enclosure just seems too hard sometimes, especially if you don’t have access to a 3D printer or laser cutter. But whipping up plastic enclosures can be quick and easy with this simple acrylic bending outfit.

At its heart [Derek]’s bending rig is not much different from any of the many hot-wire foam cutters we’ve featured. A nichrome wire with a tensioning spring is stretched across a slot in a flat work surface. The slot contains an aluminum channel to reflect the heat from the wire upward and to protect the MDF bed; we wonder if perhaps an angle section set in a V-groove might not be more effective, and whether more vertical adjustment range would provide the wider heating area needed for wider radius bends. It works great as is, though, and [Derek] took the time to build a simple timer to control the heating element, for which of course he promptly built a nice looking enclosure.

We can imagine the possibilities here are endless, especially if you use colored acrylic or Lexan and add in some solvent welding. We’ve covered acrylic enclosure techniques before; here’s a post that covers the basics.

END_OF_DOCUMENT_TOKEN_TO_BE_REPLACED 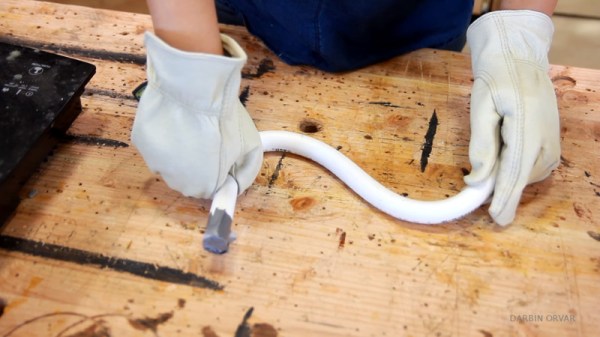 PVC pipe is a valuable material to the backyard hacker. It’s cheap, readily available, and comes in a range of different sizes. However, what do you do if you need to bend it? The typical approach would be to grab a heat gun or blowtorch, warm it up, and go from there. These methods can get messy however, with kinks and melted surfaces spoiling the final result. Now [Linn] has released a video with a method that delivers impressively neat results.

The method is simple, using that classic hacker staple — duct tape. The end of the pipe is taped off, and the pipe filled with sand. With the correct amount measured out, the sand is heated on a cooktop, then poured back into the pipe. After giving the heat some time to soften the plastic, the pipe can then be manipulated into the desired shape.

[Linn] does a great job of explaining the process in a clear and concise manner, and shares tips on how to use a bending jig to guide the final shape. Results are best with smaller pipes that are easier to heat through, but larger sections can be manipulated with patience.

We can’t wait to see what [Linn] builds with this new technique. The possibilities could be further expanded by combining with these PVC fittings designed just for building stuff.

[Thanks to George for the tip!] 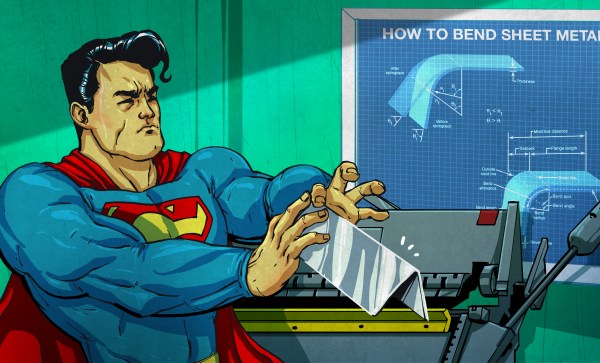 END_OF_DOCUMENT_TOKEN_TO_BE_REPLACED

Circuit bending doesn’t get a lot of respect around some parts of the Internet we frequent, but there is certainly an artistry to it. Case in point is the most incredible circuit bending we’ve ever seen. Yes, it’s soldering wires to seemingly random points on a PCB, but these bend points are digitally controlled, allowing a drum machine to transform between bent crunchiness and a classic 1980s drum machine with just a few presses of a touch screen controller.

All circuit bending must begin with an interesting piece of equipment and for this project, [Charles], the creator of this masterpiece of circuit bending, is using a Roland TR-626, a slightly more modern version of the TR-606, the percussive counterpart of the infamous TB-303. The circuit is bent in the classical fashion – tying signals on the PCB to ground, VCC, or other signals on the board. [Charles] then out does everyone else by connecting these wires to 384 analog switches controlled by an Arduino Mega. Also on the Arduino is a touch screen, and with a slick UI, this old drum machine can be bent digitally, no vast array of toggle switches required.

[Charles] has put up a few videos going over the construction, capabilities, and sound of this touch screen, circuit bent drum machine. It’s an amazing piece of work, and something that raises the bar for every circuit bending mod from this point on.

END_OF_DOCUMENT_TOKEN_TO_BE_REPLACED Sometimes while working on a project there comes a point where a specialized tool is needed. That necessary tool may or may not even exist. While [Fabien] was working on his DNA Lamp project he needed to bend a copper wire into a helical shape. Every one of us has wrapped a wire around a pencil and made a little springy thing at some point. While the diameter may have been constant, the turn spacing certainly was not. [Fabien] came up with a simple gizmo to solve that problem.

The tool utilizes an 8mm rod that will ensure the ID of the helix is indeed 8mm. We’ve already discussed that was the easy part. To make certain the turn spacing is not only consistent but also of the correct amount, a wooden frame is used. The frame has holes in it to allow the 8mm rod to pass through. Adjacent to those rod holes are much smaller holes just a bit larger than the copper wire that will become the helix. These holes are drilled at an angle to produce the correct turn spacing. [Fabien] figured out the correct angle by taking the desired turn spacing distance, helix diameter and wire diameter and plopping it in this formula:

END_OF_DOCUMENT_TOKEN_TO_BE_REPLACED Regular reader [RoadWarrior222] has watched as we’ve featured several projects that show how to bend acrylic. But so far he hasn’t seen us cover his favorite technique developed by [Dale A. Heatherington] which uses a hot wire forming tool to make precise bends. The tool is simple to use plus it’s cheap and easy to build. It’s a great choice if you don’t have a heat gun, and it may be possible to make cleaner bends than other techniques.

The business end of the bending tool is the red-hot Nichrome wire running through the aluminum channel. That channel is used to protect the MDF and act as a spacer so that the wire doesn’t touch the acrylic. On the near side the wire is anchored with a screw, but on the far end it is kept taught by including a spring. The wire heats up as it is connected to a 12V battery, but since the heating is cause by the wire’s resistance it will only get red-hot in between the alligator clips providing power. To make sure your bends will be perpendicular to the edge of the acrylic there’s an aluminum guide strip on one side of the MDF platform.

You can salvage Nichrome wire from an old hair dryer. If you have any left over it’s great for other projects like building a CNC hot-wire cutter.