Few mechanical clocks are silent, and many find the sounds they make pleasant. But the stately ticking of an old grandfather clock or the soothing sound of a wind-up alarm clock on the nightstand are nothing compared to the clattering cacophony that awaits [ProtoG] when he finishes the clock that this electromechanical decimal to binary to hex converter and display will be part of.

Undertaken as proof of concept before committing to a full six digit clock build, we’d say [ProtoG] is hitting the mark. Yes, it’s loud, but the sound is glorious. The video below shows the display being put through its paces, and when the clock rate ramps up, the rhythmic pulsations of the relays driving the seven-segment flip displays is hypnotizing. The relays, one per segment of the Alfa Zeta flip displays, have DPDT contacts wired to flip a segment by reversing polarity. As a work in progress, [ProtoG] hasn’t shared many more details yet, but he promises to keep us up to date on the converter aspect of the circuit. Right now it just seems like a simple but noisy driver. We’ll be following this one with interest.

If you prefer your clocks quieter but still like funky displays, check out this mixed media circus-themed clock.

END_OF_DOCUMENT_TOKEN_TO_BE_REPLACED 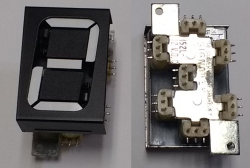 END_OF_DOCUMENT_TOKEN_TO_BE_REPLACED

[Yen] tipped us off about this cardboard record player. It’s a marketing tool that you receive in the mail. Inside the cardboard packaging is a record and the packaging itself can be folded into a player.

The NanoNote is a tiny handheld housing a lot of power for a small price. It ships running openWRT and sports a full keyboard, 336MHz processor, 32 MB ram, and 2 GB of flash memory. Not bad for $99. [Thanks Drone via Linux Devices]

Love reading ebooks but miss flipping through the pages? [Marcin Szewczyk] developed this interface that lets you flip a couple of sheets of plastic to turn and fan through pages on the screen.

Not interested in supporting an ink artist or just can’t decide on the design? Perhaps you should get an augmented reality marker tattooed on your arm and have the art digitally added for those who have already made the switch away from using their analog-only eyes. [Thanks DETN8R via Asylum]

Cooking with a CPU

[Bo3bo3] is practicing the art of cooking with processors but he’s bumped things up a notch. Instead of cooking inside a computer case, he removed the processor from the board and made it USB powered. [Thanks Waseem] Here’s another home console made into a portable. [Techknott] built this shiny GameCube handheld. You may remember him from his work on a portable Dreamcast and the wireless Xbox 360 interface. This time around he’s mirrored the finish; a good idea in concept but even his demo images are already plagued by smudges. But if you can keep your digits on the plastic buttons this makes for an eye-catching design. One part that we love is the flip-top screen that hides the optical drive. This is a much better solution than the exposed lens we saw on [Hailrazer’s] GC portable. As always, video after the break.

END_OF_DOCUMENT_TOKEN_TO_BE_REPLACED Flip cameras are fun and easy to use, but not particularly versatile. If you’ve had poor results at macrophotography with a Flip, you might be interested in these DIY lenses. One is macroscopic lens for taking photos and video of small things, and the other is a microscope for even smaller things.

The microscope’s eyepiece uses no such attachment method, simply hold it in front of the Flip. The same process can’t be used here because getting the proper focus requires it to be held at varying distances from the camera, not flush against it like the macro lens. In any case, it’s any easy mod that should have you taking pictures of bugs and other tiny things in no time. Look after the break for video of the lenses in action.