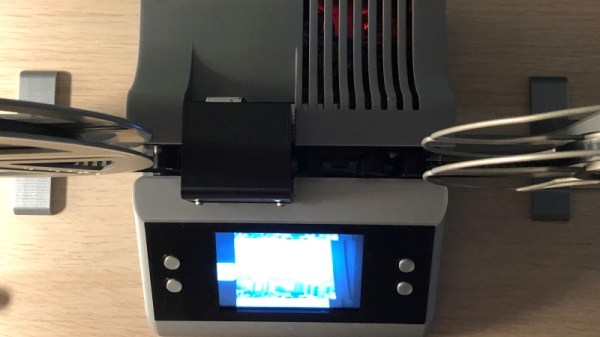 There is a treasure trove of history locked away in closets and attics, where old shoeboxes hold reels of movie film shot by amateur cinematographers. They captured children’s first steps, family vacations, and parties where [Uncle Bill] was getting up to his usual antics. Little of what was captured on thousands of miles of 8-mm and Super 8 film is consequential, but giving a family the means to see long lost loved ones again can be a powerful thing indeed.

That was the goal of [Anton Gutscher]’s automated 8-mm film scanner. Yes, commercial services exist that will digitize movies, slides, and snapshots, but where’s the challenge in that? And a challenge is what it ended up being. Aside from designing and printing something like 27 custom parts, [Anton] also had a custom PCB fabricated for the control electronics. Film handling is done with a stepper motor that moves one frame into the scanner at a time for scanning and cropping. An LCD display allows the archivist to move the cropping window around manually, and individual images are strung together with ffmpeg running on the embedded Raspberry Pi. There’s a brief clip of film from a 1976 trip to Singapore in the video below; we find the quality of the digitized film remarkably good.

Hats off to [Anton] for stepping up as the family historian with this build. We’ve seen ad hoc 8-mm digitizers before, but few this polished looking. We’ve also featured other archival attempts before, like this high-speed slide scanner.

END_OF_DOCUMENT_TOKEN_TO_BE_REPLACED 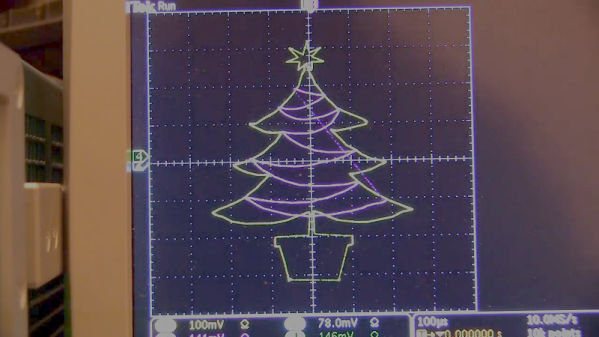 It seems like holiday decorations come up earlier and earlier every year. You might not have room for a full-blown tree in your lab, but if you have an arbitrary waveform generator and a scope, Tektronix has a way for you to show your spirit electronically.

You can see the video below. Naturally, it features Tektronix gear, but we are pretty sure you could make it work with any arbitrary waveform generator that has at least two channels and a scope with an XY mode.

END_OF_DOCUMENT_TOKEN_TO_BE_REPLACED 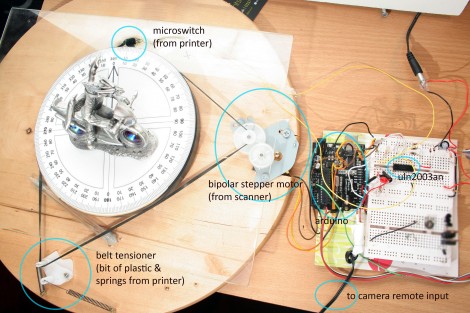 This turntable can automatically digitize objects for use in 3D rendering software like Blender3D. [James Dalby] built it using a high-quality DSLR, and some bits and pieces out of his junk box. The turntable itself is a Lazy Susan turned on its head. The base for the spinning model is normally what sits on the table, but this way it gives him an area to rest the model, and the larger portion acts as a mounting surface for the drive mechanism.

He used the stepper motor from a scanner, as well as the belt and tension hardware from a printer to motorize the platform. This is driven by a transistor array (a ULN2003 chip) connected to an Arduino. The microcontroller also controls the shutter of the camera. We’ve included his code after the break; you’ll find his demo video embedded there as well.

The concept is the same as other turntable builds we’ve seen, But [James] takes the post-processing one step further. Rather than just make a rotating gif he is using Autodesk 123D to create a digital model from the set of images.

END_OF_DOCUMENT_TOKEN_TO_BE_REPLACED For their ECE final project, [Adam Papamarcos] and [Kerran Flanagan] implemented a real-time video object tracking system centered around an ATmega644 8-bit microcontroller. Their board ingests an NTSC video camera feed, samples frames at a coarse 39×60 pixel resolution (sufficient for simple games), processes the input to recognize objects and then drives a TV output using the OSD display chip from a video camera (this chip also recognizes the horizontal and vertical sync pulses from the input video signal, which the CPU uses to synchronize the digitizing step). Pretty amazing work all around.

Sometimes clever projects online are scant on information…but as this is their final grade, they’ve left no detail to speculation. Along with a great explanation of the system and its specific challenges, there’s complete source code, schematics, a parts list, the whole nine yards. Come on, guys! You’re making the rest of us look bad… Videos after the break…

END_OF_DOCUMENT_TOKEN_TO_BE_REPLACED For those of you who have been dreading the day that you have to dig out those old family films in Super 8 format and take them to get digitized, dread no more. Now you could turn it into a cool project. [Photobsen] has posted pictures of an automated system for scanning and compiling the film into a digital movie. There was already software available, called CineToVid, which would take the scanned segments and create a video from them, but doing the actual scanning was quite laborious. [Photobsen] built a quick automated system using an old floppy drive connected to his computer via parallel port. He now scans about 80 seconds of film per hour, unattended.