Some of us are oblivious to how often we touch our faces. The current finding is we reach for our eyes, nose, or mouth every three to four minutes. Twenty times per hour is an awful lot of poking, picking, itching, and prodding when we’re supposed to keep our hands away from glands that can transmit and receive disease. To curb this habit and enter the 2020 Hackaday Prize, [Lloyd lobo] built a proof-of-concept device that sounds the alarm when you reach for your face.

We see an Arduino Uno connected to the classic HC-SR04 ultrasonic distance sensor, an LED, and we have to assume a USB battery pack. [Lloyd] recommends the smaller Nano, we might reach for the postage-stamp models and swap the ultrasonic module out for the much smaller laser time of flight sensor. At its soul, this is an intruder alarm. Instead of keeping siblings out of your room, you will be keeping your hands out of the area below the bill of the hat where the sensor is mounted. If you regularly lift a coffee cup to your lips, it might chastise you, and if you chew sunflower seeds, you might establish a tempo. *crunch* *chip* *beep* *crunch* *chip* *beep*

We have reviewed technology to improve our habits like a bracelet that keeps a tally, and maybe there is a book that will help shirk some suboptimal behaviors.

END_OF_DOCUMENT_TOKEN_TO_BE_REPLACED

We’re all pretty well-acquainted with the obstacle avoiding robot. These little inventions use a proximity sensor to detect an object in front of the robot, then circumvent the object accordingly. Brown Dog Gadgets’ little robot really caught our eye, mostly because it’s kind of cute.

This little robot combines a few LEGO pieces, Arduino, and Brown Dog Gadgets’ own in-house invention, Crazy Circuits. The LEGO pieces make up the body of the robot, craftily enclosing a small portable battery pack used to power the bot. Brown Dog Gadgets uses another home-grown design, their robotics controller board, breaking out a few GPIO pins of an Arduino-compatible microcontroller into LEGO-compatible connections. This makes it easy to interface two of our favorite DIY STEM tools using a solderless connection.

Add a few LEGO wheels and a caster for pivoting and you’ve got a pretty simple, little robot. Fortunately, Brown Dog Gadgets was very thorough in their write-up, so head on over to their Instructable for all the details.

In the meantime, we’ve got a rich history of obstacle-avoiding robots here on Hackaday. Take a look around.

END_OF_DOCUMENT_TOKEN_TO_BE_REPLACED

[Miguel] wanted to get more hands-on experience with Python, so he created a small robotic platform as a testbed. But as such things sometimes go, it turns out the robot he created is a worthy enough project in its own right. With a low total cost and highly flexible design, it might be exactly what you’re looking for. Who knows, it might even bootstrap that rover project that’s been wandering around the back of your mind. 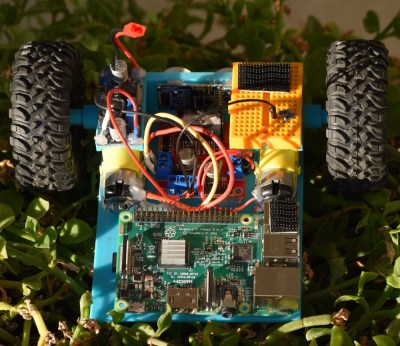 The robot makes use of an exceptionally simple 3D printed frame. No complicated suspension to worry about, no fasteners to hold together multiple printed parts. It’s just a single printed “L” shaped piece that has mounts for the motors and front sensor board. As designed it simply drags its tail around, which should work fine on smooth surfaces, but might need a bit of tweaking if you plan on taking your new robotic friend on an outdoor adventure.

There’s a big open area on the “tail” to mount a Raspberry Pi, but you could really put whatever board or microcontroller you wish here. In the nose is an HC-SR04 ultrasonic sensor, which [Miguel] is using to perform obstacle avoidance in his Python code. A dual H-Bridge motor driver controls the pair of gear motors in the front to provide propulsion and steering, and a buck converter steps down the 7.4V from the 2S LiPo battery to power the electronics. He’s even included a mini breadboard so you can add circuits or sensors as experimental payloads.

If you’re looking for a slightly more advanced 3D printed robotics platform, we’ve seen our fair share. From the nearly fully printed Watney to a tank that looks like it’s ready for front-line combat.

Infrared certainly has its uses, but if you’re trying to locate objects, ultrasonic detection is far superior. It’s contact-less, undetectable to the human ear, and it isn’t affected by smoke, dust, ambient light, or Silly String.

[lingib]’s dual sensor echo locator uses two HY-SRF05s, but the cheap and plentiful HC-SR04s will work, too. Both sensors are arranged for maximum beam overlap and wired up to an Arduino Uno. One sensor’s emitter is blocked with masking tape, so all it does is listen.

When the system registers the object, it shows up as a red dot on a grid inside a Processing sketch along with a bunch of details like the object’s coordinates, its distance from each sensor, and the area of the triangle formed by the two sensors and the object. [lingib] reports that the system is quite accurate and will work for much larger playgrounds than the 1 meter square in the demo after the break.

Don’t want to detect objects? Ultrasonic sensors are cheap enough to hack into other things, like this one-way data communications module.

END_OF_DOCUMENT_TOKEN_TO_BE_REPLACED 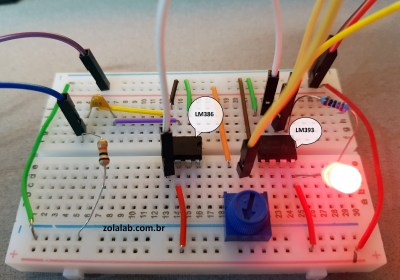 END_OF_DOCUMENT_TOKEN_TO_BE_REPLACED

We thought that making things levitate in mid-air by the power of sound was a little bit more like magic, or at least required fancy equipment. It turns out that you can do it yourself easily enough with parts that any decent hacker’s closet should have in abundance: a motor-driver IC, two ultrasonic distance pingers, and a microcontroller. This article shows you how (translated here, scroll down).

But aside from a few clever tricks, there’s not that much to show. The two HC-SR04 ultrasonic distance sensors are standard fare, and are just being used as a cheap source of 40 kHz transducers. The circuit uses a microcontroller, but any source of 40 kHz square waves should suffice. Those of you who could do that with a 555 (or a Raspberry Pi), this one’s for you! A stepper motor driver bumps up the voltage applied to the transducers, but you could use plain-vanilla transistors as well.

It’s all the little details that count, however. You need to position the two ultrasonic drivers fairly precisely to create a standing wave, and while you can start at 8.25 mm and trial-and-error it, the article demonstrates using an oscilloscope to align the capsules by driving one and reading the signal out of the other and tweaking them until they’re in phase. Clever!

The author also takes the ultrasonic-transparent grille from one of the unused receivers and uses it as a spoon to help position the styrofoam bits in the sound waves. We always wondered how you’d do that!

It turns out that it’s easy to make a DIY ultrasonic levitation desk toy, and none of the parts are expensive or critical. The missing ingredient is just the gumption to try it, and now we have that, too.

As cool as they are, the HC-SR04 modules aren’t perfect for all distance sensing applications. Here’s everything you need to know about them, including hacks to make them work up-close. And since HC-SR04 sensors come cheapest in ten-packs, you’ll be wondering what you’re going to do with the other eight. That problem has apparently also been solved.