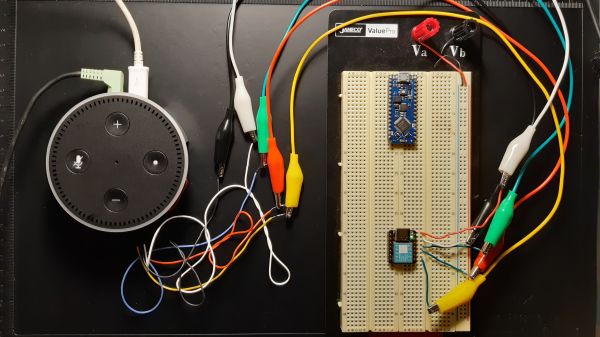 Since we’ve started inviting them into our homes, many of us have began casting a wary eye at our smart speakers. What exactly are they doing with the constant stream of audio we generate, some of it coming from the most intimate and private of moments? Sure, the big companies behind these devices claim they’re being good, but do any of us actually buy that?

It seems like the most prudent path is to not have one of these devices, but they are pretty useful tools. So this hardware mute switch for an Amazon Echo represents a middle ground between digital Luddism and ignoring the possible privacy risks of smart speakers.  Yes, these devices all have software options for disabling their microphone arrays, but as [Andrew Peters] relates it, his concern is mainly to thwart exotic attacks on smart speakers, some of which, like laser-induced photoacoustic attacks, we’ve previously discussed. And for that job, only a hardware-level disconnect of the microphones will do.

To achieve this, [Andrew] embedded a Seeeduino Xiao inside his Echo Dot Gen 2. The tiny microcontroller grounds the common I²S data line shared by the seven (!) microphones in the smart speaker, effective disabling them. Enabling and disabling the mics is done via the existing Dot keys, with feedback provided by tones sent through the Dot speaker. It’s a really slick mod, and the amount of documentation [Andrew] did while researching this is impressive. The video below and the accompanying GitHub repo should prove invaluable to other smart speaker hackers.

END_OF_DOCUMENT_TOKEN_TO_BE_REPLACED We think of the Arduino as a rapid prototyping tool but we never thought of it as an FTDI breakout board before. [Ihsan Kehribar] wrote a quick post to show how it’s done. You’ll find an FTDI chip on Arduino boards that have a USB connector. It’s used to handle the USB communications on one side, and TTL serial communications on the other. The serial pins from the chip are mapped to the UART on the AVR chip, and in turn they appear on the pin headers for easy connections. Just load up a really simple sketch(available from Ihsan’s post) to make sure the processor doesn’t get in the way and you’ve got yourself an FTDI breakout board. If you happen to have a Seeeduino there’s even more functionality as the board has a selector switch that allows you to choose between 5V and 3.3V levels.

This doesn’t hold true to the newest generation of Arduino, as those board have replaced the FTDI chip with an ATmega8U2. That’s basically and ATmega8 with native USB handling… fancy.

Related: The Seeeduino has an alternate row of headers with protoboard friendly spacing.

Make has assembled a buyers guide for the many different types of Arduino devices. The Arduino is an open hardware platform designed to make prototyping easily accessible. The design allows for other people to modify, expand, and improve on the base, and many people have started producing their own versions. The guide features a lot of the hardware we’ve covered in the past like the LilyPad, Arduino Pro, Sanguino, Duemilanove, Ethernet Shield, and Freeduino.

Out of the pack, the Seeeduino (pictured above) definitely caught our eye. It’s a low profile SMD design much like the Arduino Pro. They’ve taken advantage of the space saved by the SMD ATmega168 by adding more useful headers. In addition to the ICSP, you get the pins in UART order and an I2C header. Vcc is switch selectable for 3.3 or 5volts. The reset switch has been moved to the edge plus two additional ADC pins. Our favorite feature is the new spacing on the digital pins. Arduino digital pin headers have an inexplicable 160mil gap between the banks. The Seeeduino has the standard row for shield compatibility, but has an additional row spaced at standard 100mil spacing for use with protoboard. At $23.99, it’s competitively priced too.