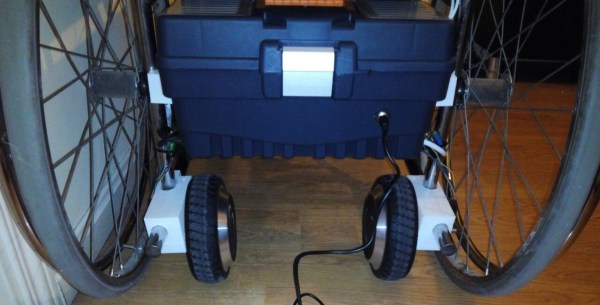 [Irene Sans] and [Alvaro Ferrán Cifuentes] feel that electric wheelchairs are still too expensive. On top of that, as each person’s needs are a little different, usually don’t exactly fit the problems a wheelchair user might face. To this end they’ve begun the process of creating an open wheelchair design which they’ve appropriately dubbed OpenChair.

As has been shown in the Hackaday Prize before, there’s a lot of things left to be desired in the assistive space. Things are generally expensive. This would be fine, but often insurance doesn’t cover it or it’s out of the range of those in developing nations.  As always, the best way to finish is to start, so that’s just what [Irene] and [Alvaro] has done.

They based their initial design on the folding wheel chair we all know. It’s robust enough for daily use and is fairly standard around the world. They designed a set of accessories to make the wheelchair more livable for daily use as well as incorporating the controls.

The next problem was locomotion. Finding an off-the-shelf motor that was powerful enough without breaking the budget was proving  difficult, but they had an epiphany. Why not use mass production toy crap to their advantage. The “hoverboards” that were all the rage this past commerical holiday season were able to roll a person around, so naturally a wheelchair would be within the power range.

They extracted the two 350 watt hub motors, batteries, and control boards. It took a bit of reverse engineering but they were able to get the hub drive motors of the hoverboard integrated with the controls on their wheelchair. 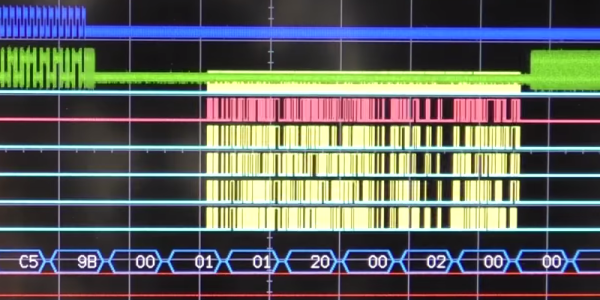 [Mike] wanted to drive several SPI peripheral from a PIC32. He shows how much latency his conventional interrupt handlers were taking away from his main task. He needed something more efficient. So he created the SPI channels using DMA. He also made a video (see below) with a very clear explanation about why he did it and shows oscilloscope traces about how it all works.

Although the project is specific to the PIC32, the discussion about DMA applies to any computer with direct memory access. The only thing missing is the code. However, there are plenty of examples on the web you can look at, including a Microchip webinar.

END_OF_DOCUMENT_TOKEN_TO_BE_REPLACED 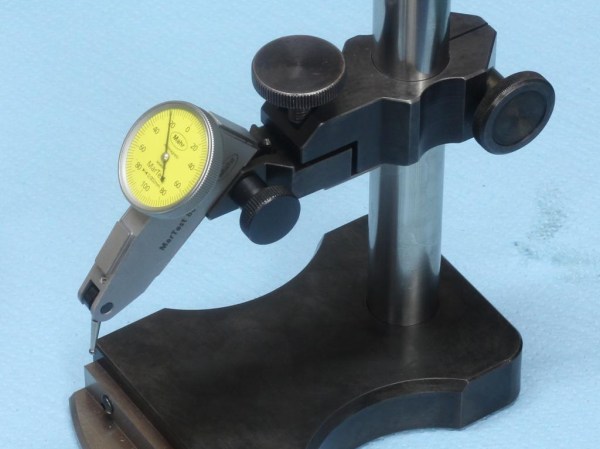 [Stefan Gotteswinter] has a thing for precision. So it was no surprise when he confessed frustration that he was unable to check the squareness of the things he made in his shop to the degree his heart desired.

He was looking enviously at the squareness comparator that [Tom Lipton] had made when somone on Instagram posted a photo of the comparator they use every day. [Stefan] loved the design and set out to build one of his own. He copied it shamelessly, made a set of drawings, and got to work.

[Stefan]’s videos are always a trove of good machine shop habits and skills. He always shows how being careful, patient, and doing things the right way can result in really astoundingly precise work out of a home machine shop. The workmanship is beautiful and his knack for machining is apparent throughout. We chuckled at one section where he informed the viewer that you could break a tap on the mill when tapping under power if you bottom out. To avoid this he stopped at a distance he felt was safe: 0.5 mm away.

The construction and finishing complete, [Stefan] shows how to use the comparator at the end of the video, viewable after the break.

END_OF_DOCUMENT_TOKEN_TO_BE_REPLACED 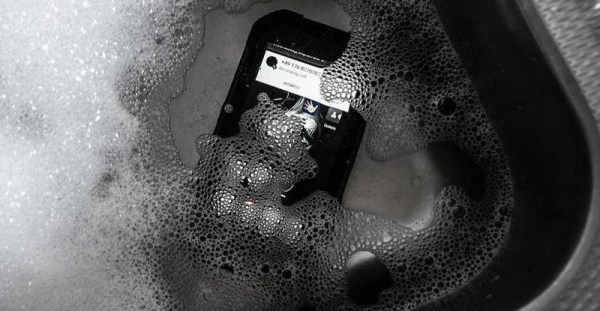 Have you ever considered sourcing an off-brand phone from the China markets? Why, or what stopped you? The answer is data and identity. You are trusting both when you decide to use a smartphone. Let’s face it, smartphones are a personality prosthesis in our society. They know your physical location, what your interests are, the people you hang out with, and how you spend your money. The keys to the castle are shared with these devices and you shouldn’t grant that kind of trust without knowing your phone is worthy of it.

But… what if that phone has amazing features at an equally amazing price? [ijsf] bought the phone and then made it earn the proper level of trust. The model in question is a Blackview BV6000s — pictured above in a tub of soapy water proving it’s IP68 claim. This thing has flagship specs but not a flagship name so [ijsf] took [Dave Jones’] advice and took it apart instead of turning it on. In this case, it is a complete ROM dump and disassembly.

The goals was to find malware — anything that is potentially leaking data. Nothing was found, which we think is because this phone isn’t nearly shady enough. We’d expect the bargain basement models (like this $3 vaporware) to be more in line. That one actually has a carrier behind it which means they plan to recoup on usage charges. But suspiciously cheap phones may be using a business model that makes it back by stealing a chunk of your identity.

Two good things come out of [ijsf’s] writeup. First, it’s a decent guide to dumping and snooping in a ROM. Second, in addition to the fruitless search for thieving apps, the annoying bloatware was removed for a cleaner ‘stock’ image.

Artist and Hackaday reader [Blair Neal] wrote in with his incredible compendium of “alternative” displays. (Here as PDF.) From Pepper’s Ghost to POV, he’s got it all covered, with emphasis on their uses in art.

There’s an especially large focus on 3D displays. Projecting onto screens, droplets of water, spinning objects, and even plasma combustion are covered. But so are the funny physical displays: flip-dots, pin-cushions, and even servo-driven “pixels”.

We really liked the section on LCDs with modified polarization layers — we’ve seen some cool hacks using that gimmick, but the art pieces he dredged up look even better. Makes us want to take a second look at that busted LCD screen in the basement.

We’re big fans of the bright and blinky, so it’s no surprise that [Blair] got a bunch of his examples from these very pages. And we’ve covered [Blair]’s work as well: both his Wobbulator and his “Color a Sound” projects. Hackaday: your one-stop-shop for freaky pixels.

[Blair]’s list looks pretty complete to us, but there’s always more out there. What oddball displays are missing? What’s the strangest or coolest display you’ve ever seen? 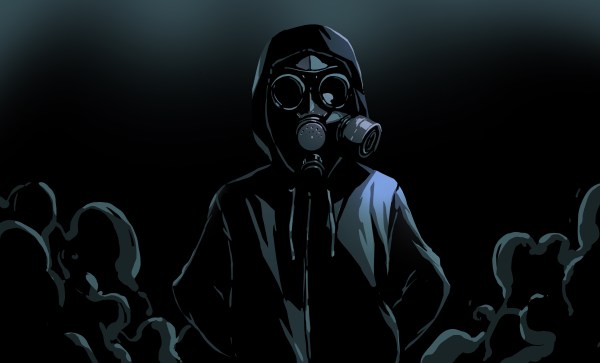 Fearless makers are conquering ever more fields of engineering and science, finding out that curiosity and common sense is all it takes to tackle any DIY project. Great things can be accomplished, and nothing is rocket science. Except for rocket science of course, and we’re not afraid of that either. Soldering, welding, 3D printing, and the fine art of laminating composites are skills that cannot be unlearned once mastered. Unfortunately, neither can the long-term damage caused by fumes, toxic gasses and heavy metals. Take a moment, read the material safety datasheets, and incorporate the following, simple practices and gears into your projects.

END_OF_DOCUMENT_TOKEN_TO_BE_REPLACED 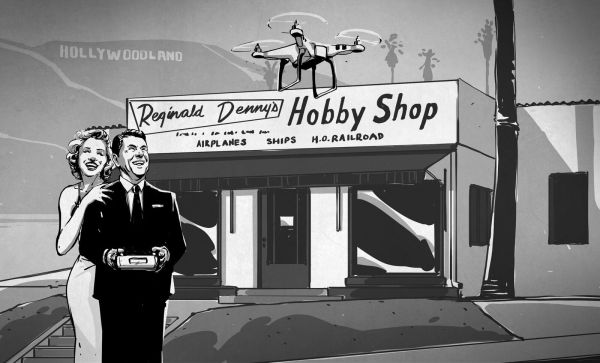 In the early 1930s, Reginald Denny, an English actor living in Los Angeles, stumbled upon a young boy flying a rubber band-powered airplane. After attempting to help the boy by adjusting the rubber and control surfaces, the plane spun into the ground. Denny promised he would build another plane for the boy, and wrote to a New York model manufacturer for a kit. This first model airplane kit grew into his own hobby shop on Hollywood Boulevard, frequented by Jimmy Stewart and Henry Fonda.

The business blossomed into Radioplane Co. Inc., where Denny designed and built the first remote controlled military aircraft used by the United States. In 1944, Captain Ronald Reagan of the Army Air Forces’ Motion Picture unit wanted some film of these new flying targets and sent photographer David Conover to the Radioplane factory at the Van Nuys airport. There, Conover met Norma Jeane Dougherty and convinced her to go into modeling. She would later be known as Marilyn Monroe. The nexus of all American culture from 1930 to 1960 was a hobby shop that smelled of balsa sawdust and airplane glue. That hobby shop is now a 7-Eleven just off the 101 freeway.

Science historian James Burke had a TV wonderful show in the early 90s – Connections – where the previous paragraphs would be par for the course. Unfortunately, the timbre of public discourse has changed in the last twenty years and the worldwide revolution in communications allowing people to instantaneously exchange ideas has only led to people instantaneously exchanging opinions. The story of how the Dutch East India Company led to the rubber band led to Jimmy Stewart led to remote control led to Ronald Reagan led to Death of a Salesman has a modern fault: I’d have to use the word ‘drone’.

I’m slightly annoyed by this and by the reminder I kindly get in my inbox every time I use the dreaded d-word. The etymology of the word ‘drone’ has nothing to do with spying, firing missiles into hospitals, or illegally killing American civilians. People like to argue, though, and I need something to point to when someone complains about my misuse of the word ‘drone’. Instead of an article on Hollywood starlets, the first remote control systems, and model aviation, you get an article on the etymology of a word. You have no one else to blame but yourself, Internet.