It’s a versatile robot arm, for a fraction of the cost of what came before it, with immense potential for customization. And did I mention that it’s open source? END_OF_DOCUMENT_TOKEN_TO_BE_REPLACED

When Iron Man movie came out, we’d bet there wasn’t a single hacker that left the theater without daydreaming about having a few robotic lab assistants of their own. But unlike most of them, [Tony-Lin] decided to turn his celluloid dreams into a reality and started work on his robotic arm, Abot.

Abot is built from a combination of 5 mm nylon panels and 3D printed parts. One thing we found particularly interesting about this build is that the motor reductions for the joints are done using stages of pulleys and GT2 belting rather than planetary gear boxes or cycloidal drives. This produces a lightweight and affordable build.

He also designed his own driver boards for each motor using the STM32. They communicate with a CAN bus which uses USB connectors, an interesting choice. Just make sure not to try and charge your phone with it.

We have to admit to a little jealousy that [Tony] is moved himself a bit closer to being Tony Stark than the rest of us are likely to get. We’ll just have to live vicariously through the documentation of his project.

How is it possible that a robot can sketch both better and worse than I can at the same time, and yet turn out an incredible work of art? Has 3D-scanning really come so far that a simple camera and motorized jig can have insane resolution? These are the kinds of questions that were running through my mind, and being answered by the creators of these brilliant machines, at Maker Faire Rome.

There was a high concentration of robots creating art and 3D printing on display and the Faire, so I saved the best examples just for this article. But you’ll also find hacks from a few groups of clever students, and hardware that made me realize industrial controllers can be anything but boring. Let’s take a look!

END_OF_DOCUMENT_TOKEN_TO_BE_REPLACED

[Dan Royer] is taking some inspiration from Prusa’s business and is trying to build the same sort of enterprise around open source 3D printable robot arms. His 6 axis robot arm is certainly a strong first step on that road.

As many people have learned, DIY robot arms are pretty difficult.  [Dan]’s arm has the additional complexity of being 3D printable with the ambitious goal of managing a 2kg payload at 840mm of reach. He’s already made significant progress. There’s a firmware, set of custom electronics, and a Fusion 360 project anyone can download and checkout. You can even control it with an Xbox controller.

The main board is an Arduino shield which outputs step and direction signals to stepper drivers. The gears are cycloidal and it appears there’s even some custom machining going on. When the parts are all laid out it becomes clear just how much effort has been put into this design.

It should be a pretty nice robot and might finally spur some of us to build the Iron Man style robot assistants we’ve always wanted. You can see the robot in action after the break.

END_OF_DOCUMENT_TOKEN_TO_BE_REPLACED 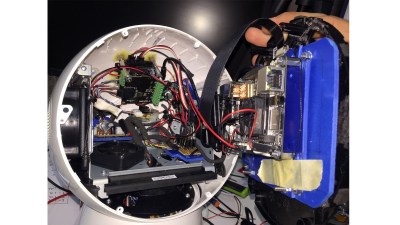