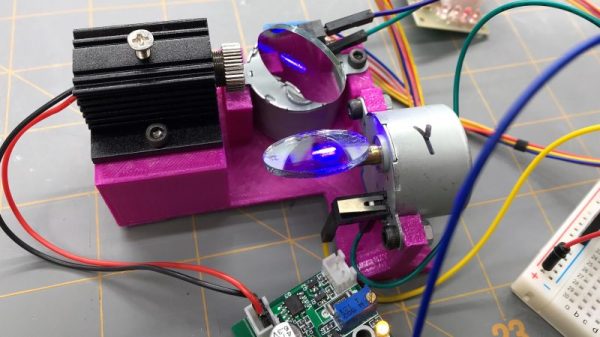 Yes, laser cutters that come off the slow boat from China are more affordable than ever, and with some tweaks and hacks they can turn out some decent results. But if you just want a laser lightshow that’ll draw boxes on your living room ceiling, this simple X-Y laser scanner might be a good platform to build.

Let’s say right up front that there are more than a few safety issues with [ThingEngineer]’s 3D-printed two-axis scanner. He’s well aware of these potential retina-cooking issues and duly notes that a good pair of laser safety goggles is a must and that the cheap anti-lawsuit glasses that laser module manufacturers often include with their products don’t count.

[Editor’s Note: Glasses are really only intended for alignment operations. Pros enclose lasers beyond a certain power to prevent anyone going blind. Know where your beam terminates, kids.]

With that in mind, there’s a lot to be said for this poor man’s scanner build. Yes, it would be faster with real galvos and low-mass mirrors, but time is money, and the steppers and craft store mirror discs do the job, albeit slowly. We like that everything is so simple, even the method for turning a regular mirror into a front-surface mirror.

[ThingEngineer] proves you don’t need galvanometers to have some simple laser fun. And if steppers don’t do it for you, you can try little brushed DC hobby motors or even 3D-printed cams.

END_OF_DOCUMENT_TOKEN_TO_BE_REPLACED 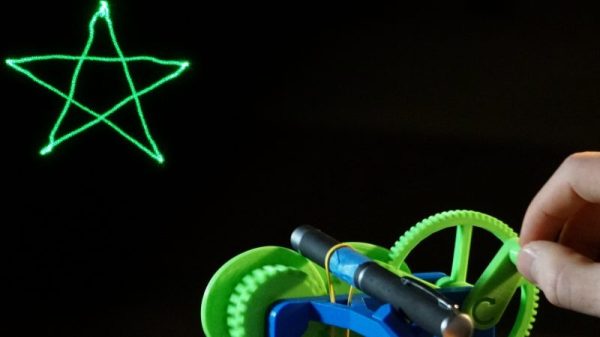 Everyone knows how to make a POV laser display — low-mass, first-surface mirrors for the X- and Y-axes mounted on galvanometers driven rapidly to trace out the pattern. [Evan Stanford] found a simpler way, though: a completely mechanical laser show from 3D-printed parts.

The first 10 seconds of the video below completely explains how [Evan] accomplished this build. A pair of custom cams wiggles the laser pointer through the correct sequences of coordinates to trace the desired pattern out when cranked by hand through a 1:5 ratio gear train. But what’s simple in concept is a bit more complicated to reduce to practice, as [Evan] amply demonstrates by walking us through the math he used to transfer display shapes to cam profiles. If you can’t follow the math, no worries — [Evan] has included all the profiles in his Thingiverse collection, and being a software guy by nature, he’s thoughtfully developed a program to automate the creation of cam profiles for new shapes. It’s all pretty slick.

Looking for more laser POV goodness? Perhaps a nice game of laser Asteroids would suit you.

END_OF_DOCUMENT_TOKEN_TO_BE_REPLACED

What happens when you throw a ball into a box? In the real world, the answer is simple – the ball bounces between the walls and the floor until it eventually loses energy and comes to rest. What happens when you throw a virtual ball into a virtual box? Sounds like something you might need a program running on a digital computer to answer. But an analog computer built with a handful of op amps can model a ball in a box pretty handily too.

OK, it takes quite a large handful of op amps and considerable cleverness to model everything in this simple system, as [Glen Kleinschmidt] discovered when he undertook to recreate a four-decade-old demonstration project from AEG-Telefunken. Plotting the position of an object bouncing around inside the virtual box is the job of two separate circuits, one to determine the Y-coordinate and bouncing off the floor, and one to calculate the X-coordinate relative to the walls. Those circuits are superimposed by a high-frequency sine-cosine pair generator that creates the ball, and everything is mixed together into separate outputs for an X-Y oscilloscope to display. The resulting simulation is pretty convincing, with the added bonus of the slowly decaying clicks of the relay used to change the X direction each time a wall is hit.

There’s not much practical use, but it’s instructional for sure, and an impressive display of what’s possible with op amps. For more on using op amps as analog computers, check out [Bil Herd]’s “Computing with Analog” article.

END_OF_DOCUMENT_TOKEN_TO_BE_REPLACED 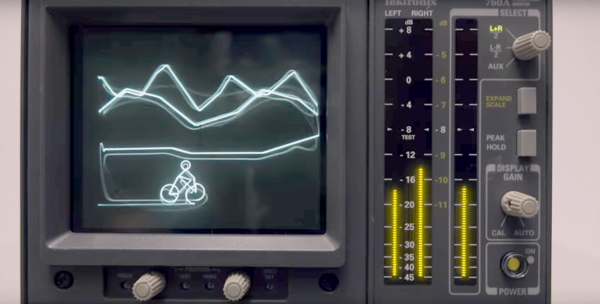 Everyone likes a good light show, but probably the children of the 60s and 70s appreciate them a bit more. That’s the era when some stereos came with built-in audio oscilloscopes, the search for which led [Tech Moan] to restore an audio monitor oscilloscope and use it to display oscilloscope music.

If the topic of oscilloscope music seems familiar, it may be because we covered [Jerobeam Fenderson]’s scope-driving compositions a while back. The technique will work on any oscilloscope that can handle X- and Y-axis inputs, but analog scopes make for the best display. The Tektronix 760A that [Tech Moan] scrounged off eBay is even better in that it was purpose-built to live in an audio engineer’s console for visualizing stereo audio signals. The vintage of the discontinued instrument isn’t clear, but from the DIPs and discrete components inside, we’ll hazard a guess of early to mid-1980s.  The eBay score was a bargain, but only because it was in less that perfect condition, and [Tech Moan] wisely purchased another burned out Tek scope with the same chassis to use for spares.

The restored 760A does a great job playing [Jerobeam]’s simultaneously haunting and annoying compositions; it’s hard to watch animated images playing across the scope’s screen and not marvel at the work put into composing the right signals to make it all happen. Hats off to [Tech Moan] for bringing the instrument back to life, and to [Jerobeam] for music fit for a scope.