Despite appearances, [This Old Tony]’s latest series has little to do with CNC-ifying an Etch A Sketch. Although he certainly achieves that, more or less, automating the classic toy is just the hook for a thorough lesson in CNC machine building starting with the basics.

Fair warning: we said basics, and we mean it. [Old Tony]’s intended audience is those who haven’t made the leap into a CNC build yet and need the big picture. Part one concentrates on the hardware involved – the steppers, drivers, and controller. He starts with one of those all-in-one eBay packages, although he did upgrade the motion controller to a Mach4 compatible board; still, the lessons should apply to most hardware.

By the end of part one, the Etch A Sketch is connected to two of the steppers and everything is wired up and ready to go for part two, the first part of which is all about inputs and outputs. Again, this is basic stuff, like how relays work and why you might need to use them. But that’s the kind of stuff that can baffle beginners and turn them off to the hobby, so kudos to [Old Tony] for the overview. The bulk of the second part is about configuring Mach4 Hobby, with a ton of detail and some great tips and tricks for getting a machine ready to break some end mills.

For someone looking to get into a CNC build, [Old Tony]’s hard-won CNC experience really fills in the gaps left by other tutorials. And it looks like a third part, dealing with making all this into something more than an automated Etch A Sketch, is in the works. We’re looking forward to that.

END_OF_DOCUMENT_TOKEN_TO_BE_REPLACED

The Surface Dial is a $100+ rotary control. You can turn it, and it’ll make some basic stuff happen on your Microsoft Surface. It’s silver and sleek and elegant but fundamentally, it just works via emulated keyboard shortcuts. This doesn’t really do much for translating analog rotational motion into digital feedback in a nice way, so [SaveTheHuman5] created Elephant to fix this issue.

As standard, there are two ways to work with the Surface Dial as an end-user. The easiest way is to use existing utilities to map dial actions to shortcut keys. However, for interfacing with knobs and sliders in user interfaces, this is clunky. Instead, [SaveTheHuman5] drilled down and created their own utility using the Surface Dial API provided by Microsoft. This allows raw data to be captured from the dial and processed into whatever interactions your heart desires – as long as you’ve got the coding muscles to do it!

The Elephant software allows the knob to be used in two distinct modes – mouse capture, and MIDI. Mouse capture allows one to use a regular mouse to select UI objects, such as knobs in a music application, and then turn the Surface Dial to adjust the control. Anyone that’s struggled with tiny emulated rotary controls on a VST synth before would instantly know the value of this. In MIDI mode, however, the knob simply presents itself as a MIDI device outputting commands directly which would be more useful in performance environments in particular.

Overall, it’s a tidy hack of an otherwise quite limited piece of hardware – the only thing we’d like to see is more detail on how it was done. If you’ve got a good idea on how this could work, throw it down in the comments. And, if your thirst for rotary controls is still not satiated, check out this media controller. Video after the break.

END_OF_DOCUMENT_TOKEN_TO_BE_REPLACED

Looking to take your project to the next level in terms of functionality and appearance? A custom LCD display might be the thing that gets you there, at least compared to the dot-matrix or seven-segment displays that anyone and their uncle can buy from the usual sources for pennies. But how does one create such a thing, and what are the costs involved? As is so often the case these days, it’s simpler and cheaper than you think, and [Dave Jones] has a great primer on designing and specifying custom LCDs.

The video below is part of an ongoing series; a previous video covered the design process, turning the design into a spec, and choosing a manufacturer; another discussed the manufacturer’s design document approval and developing a test plan for the module. This one shows the testing plan in action on the insanely cheap modules – [Dave] was able to have a small run of five modules made up for only $138, which included $33 shipping. The display is for a custom power supply and has over 200 segments, including four numeric sections, a clock display, a bar graph, and custom icons for volts, amps, millijoules, and watt-hours. It’s a big piece of glass and the quality is remarkable for the price. It’s not perfect – [Dave] noted a group of segments on the same common lines that were a bit dimmer than the rest, but was able to work around it by tweaking the supply voltage a bit.

We’re amazed at how low the barrier to entry into custom electronics has become, and even if you don’t need a custom LCD, at these prices it’s tempting to order one just because you can. Of course, you can also build your own LCD display completely from scratch too.

END_OF_DOCUMENT_TOKEN_TO_BE_REPLACED

The simple DC brushed motor is at the heart of many a robotics project. For making little toy bots that zip around the house, you can’t beat the price and simplicity of a pair of brushed motors. They’re also easy to control; you could roll your own H-bridge out of discrete transistors, or pick up one of the commonly used ICs like the L298N or L9110S. 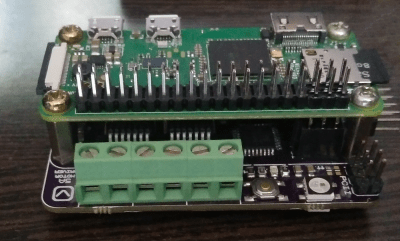 But what if you want an all-in-one solution? Something that will deliver enough current for most applications, drive dual motors, and deal with a wide range of input voltages. Most importantly, something that will talk to any kind of input source.  For his Hackaday prize entry, [Praveen Kumar] is creating a dual brushed motor controller which can handle a multitude of input types. Whether you’re using an IR remote, a Pi communicating over I2C, an analog output or Bluetooth receiver, this driver can handle them all and will automatically select the correct input source.

The board has an ATmega328p brain, so Arduino compatibility is there for easy reprogramming if needed. The mounting holes and header locations are also positioned to allow easy stacking with a Pi, and there’s a status LED too. It’s a great module that could easily find a place in a lot of builds.

If you need even more control over your brushed motor, you can soup up its capabilities by adding a PID loop for extra smarts.

END_OF_DOCUMENT_TOKEN_TO_BE_REPLACED

Sometimes it seems like eBay is the world’s junk bin, and we mean that in the best possible way. The variety of parts available for a pittance boggles the mind sometimes, especially when the parts were once ordered in massive quantities but have since gone obsolete. The urge to order parts like these in bulk can be overwhelming, and sooner or later, you’ll find yourself with a fistful of old stuff but no idea how to put it to use.

Case in point: the box of Russian surplus seven-segment vacuum fluorescent displays (VFDs) that [w_k_fay] had to figure out how to use. The result is a tutorial on quick and dirty VFD drivers that looks pretty handy. [w_k_fay] takes pains to point out that these are practical tips for putting surplus VFDs to work, as opposed to engineered solutions. He starts with tips on characterizing your surplus tubes in case you don’t have a pinout. A 1.5 V battery will suffice for the hot cathode, while a 9 V battery will turn on the segments. The VFDs can be treated much like a common cathode LED display, and a simple circuit driving the tube with a 4026 decade counter can be seen below. He also covers the challenges of driving VFDs from microcontrollers, and promises a full build of a frequency counter wherein the mysteries of multiplexing will be addressed.

Sounds like it’s time to stock up on those surplus VFDs and put them to work. For inspiration, take a look at this minimalist VFD clock, or perhaps mix VFDs with Nixies to satisfy your urge for all things glowy.